From the air, Hamburg appears safe from sea level rise: the epicenter of German shipping is 110 kilometers from the open sea. Built strategically along the powerful Elbe River, Hamburg is nestled deep within Jutland, a 70,000-square-kilometer peninsula about the size of Ireland that separates the North Sea from the Baltic.

But three times this past January, hurricane-force winds pushed strong storm surges up the channel, overwhelming the downstream flow of one of Europe’s largest rivers. Water rose two meters above the river’s banks. It wasn’t as bad as the 1962 flood that swamped 120 square kilometers and destroyed 6,000 homes, but it was a reminder that those living in Hamburg—along with the five million people living in other coastal European cities—face a growing threat of extreme floods fueled by global warming.

Hamburg is accustomed to flooding. When this year’s floods rolled up the Elbe, people were ushered away from the historical fish market, and the trawlers in the harbor were evacuated. The sea was allowed to sweep across the waterfront, spilling through the 300-year-old great market hall.

It was not a big deal. “All we have to do is clean up afterward,” says Olaf Müller, chief of the city agency for roads, bridges, and waters. “We live with the water there. When the floods come, we open the doors.”

But by the end of the century, extreme floods that once happened only every 100 years will occur annually along Europe’s northern coasts, costing cities up to US $40-billion each year. Defensive structures will crumble under intensifying waves.

“It’s an eye-opener—I can’t even begin to comprehend it,” says Michalis Vousdoukas, whose new report for the Europe Joint Research Centre analyzes the risk of extreme flooding across Europe. But there’s still a major disconnect between projections of future sea level rise and current flood protection infrastructure, he says: most existing barriers are engineered for today’s climate. “They will be obsolete in the decades ahead.” 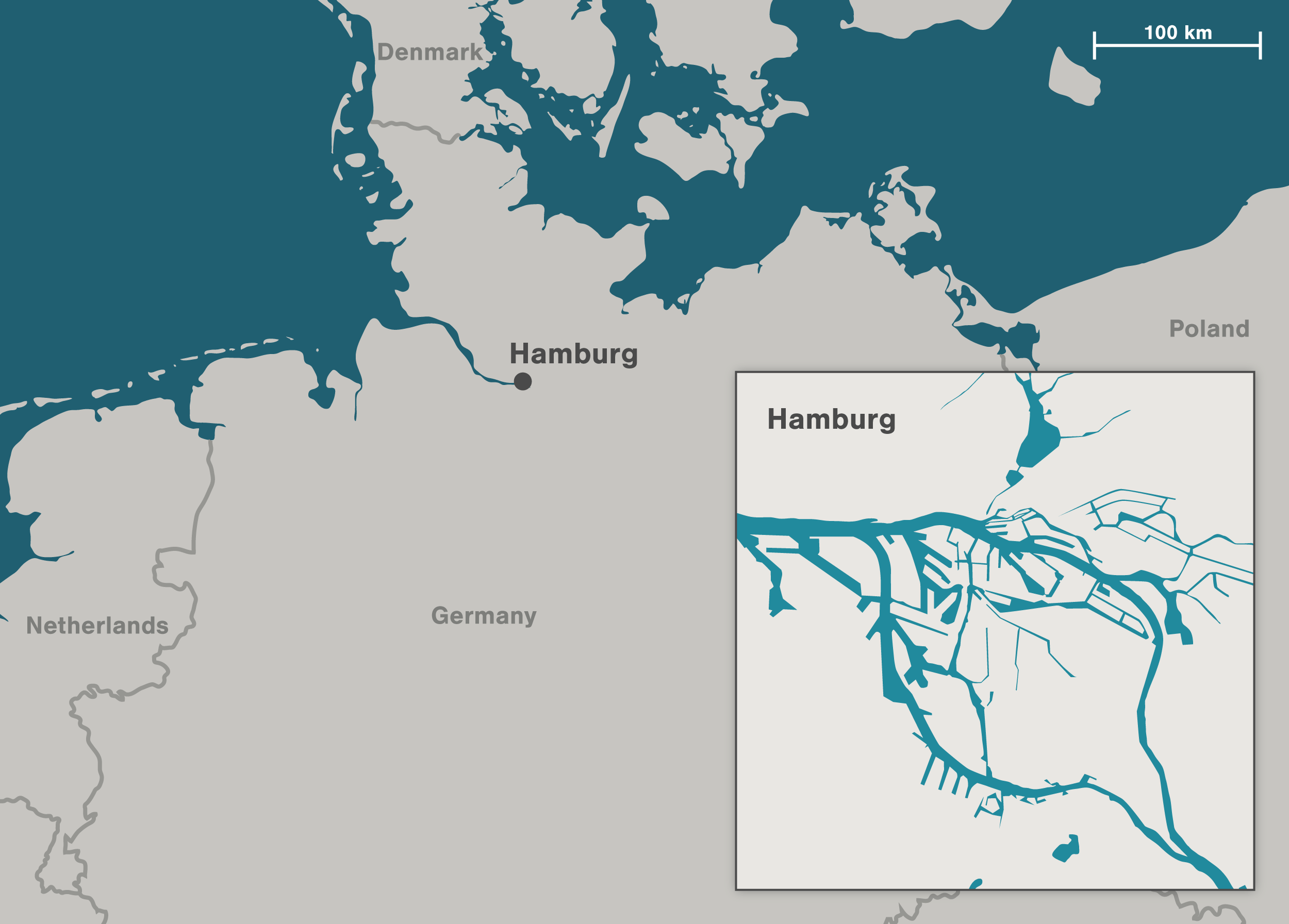 Despite being far from the ocean, Hamburg, a city crisscrossed by canals, is still susceptible to sea level rise. Illustration by Mark Garrison

At the European Geosciences Union conference in Vienna last week, researchers painted an even more dire picture of the future of European flooding. After adjusting models to account for the height of vegetation in flood zones, researchers concluded that far more people are at risk from storm surges fueled by sea level rise than previously thought—50 percent more in the United Kingdom and 20 percent more in the Netherlands, says Dutch climate researcher Dirk Eilander.

Hamburg is trying to update its coastal defenses. To stave off the catastrophic damage projected by researchers such as Vousdoukas and Eilander, Hamburg will spend $592-million over the next 30 years to reinforce and heighten a 103-kilometer network of dikes and sea walls.

In 2012, the city government approved an $86-million boost to raise the dikes by almost a meter. Müller hopes it will be enough to protect the city from the half meter of sea level rise projected for the next 100 years. According to reinsurance company Munich RE, building flood protection infrastructure is a wise financial decision: every dollar spent on adaptation yields a tenfold return in damage averted.

Carl-Friedrich Schleussner, a sea level rise expert with German think tank Climate Analytics says Hamburg also has to consider the threat of floodwaters flowing down the Elbe, which has seen increased flow rates in recent decades from storm surges pushing up the river. Bolstering dikes is one option, he says, but the best bet for cities is to cut greenhouse gas emissions as aggressively as possible.

“The speed of sea level rise is a real challenge. The only thing you can do to slow it down is to cut emissions,” Schleussner says. The rate of sea level rise can be cut dramatically if warming can be reined in, he says.

“It makes a huge difference. The question of which trajectory we’re on is not random probability—it’s political choice.”