Captain George Drevar and the crew of the sailing ship Pauline were off the coast of Brazil in 1875 when they witnessed a battle between two titans of the sea: a sperm whale and a monstrous sea serpent.

Over the span of 15 minutes, Drevar watched as the serpent coiled itself around the whale and attempted to pull it below the surface. Occasionally, the battle dipped out of sight, only to rise again. Eventually the serpent prevailed, and the whale was dragged to the dark depths “where no doubt it was gorged at the serpent’s leisure,” Drevar wrote in a statement.

From today’s scientific vantage, it’s difficult to imagine what Drevar saw—no known animal remotely fits the description. Yet Robert France, an ecologist at Dalhousie University in Halifax, Nova Scotia, thinks he can explain Drevar’s and other sailors’ sea monster tales. France suggests the incident was indeed a battle, but between a dying whale and the discarded fishing gear that was pulling it under.

The sea monster observed by Captain George Drevar and his crew, as seen in A. C. Oudemans’s The Great Sea Serpent, was drawn by Reverend E. L. Penny while the crew was in Zanzibar. Photo by Chronicle/Alamy Stock Photo

In a series of papers published in maritime history journals in late 2016, France hypothesizes that many sightings of sea monsters throughout the 19th and early 20th centuries were actually whales, sea turtles, and other marine life entangled in marine debris.

France trolled through books by scientists Bernard Heuvelmans and A. C. Oudemans that compiled reports of sea serpent sightings dating back to the mid-17th century, and found that oftentimes the characteristics of a sea serpent—the presence of a long tail, for instance—were merely inferred by the sailors and could have been trailing debris. In many reports, France found details he thought suggested marine debris had been involved. Sea monsters with humps, for example, could have been fishing floats. Heuvelmans even used the term “string of buoys” to describe one such monster.

France says nearly a fifth of the several hundred accounts he analyzed had something that made him suspect it was actually a sighting of entanglement. That’s enough to make France think entanglement was an unreported threat to marine populations.

That a seasoned sailor would misinterpret a whale as a sea monster sounds fantastical, but under the right conditions, France says it’s not impossible. As a case in point, he points to his own experience: as a master’s student, he was in Ontario conducting research on a remote lake. He says he was alone, at dusk, when he saw a mother moose swimming across the lake with a calf following close behind. The cow had caught some debris that was bobbing between her and the calf, and the combination of the three “looked like a Loch Ness monster.” Under the right conditions, things are not always as they seem.

If France’s hypothesis is correct, it raises another interesting issue.

Though the dangers of marine creatures becoming entangled in lost fishing gear and other debris are now widely recognized, most discussions of the issue treat it as a relatively new threat—one that has come about because of the widespread adoption of plastic and synthetic fishing gear in the 1950s. 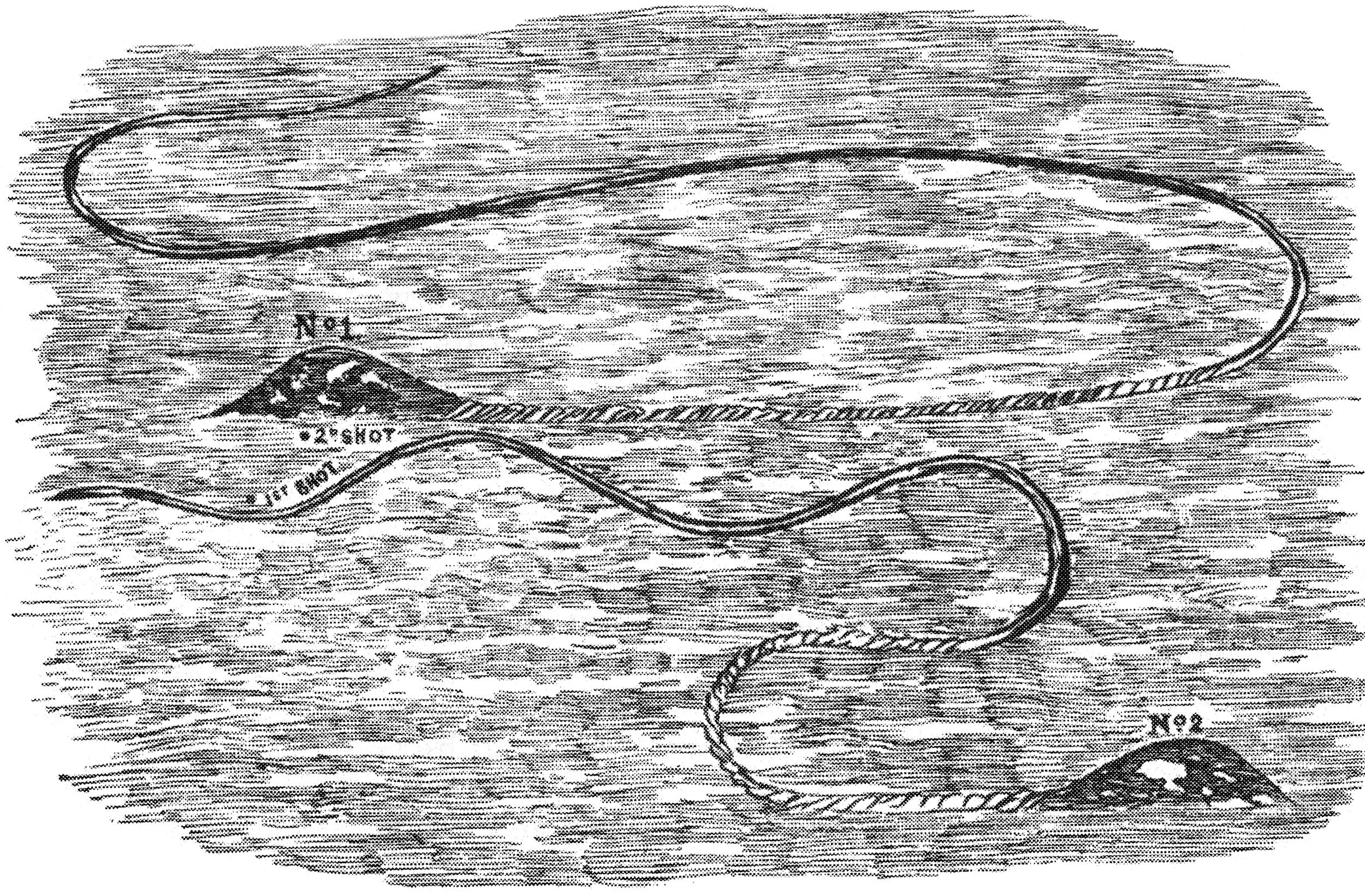 An image published in Illustrated London News in 1857 depicts a scene in which a lighthouse keeper saw a sea monster with a head covered in white spots and a tail that stretched 60 meters. Ecologist Robert France suggests it was just a whale with fishing gear trailing behind. Photo courtesy of Robert France

A 2014 report from the US National Oceanic and Atmospheric Administration (NOAA), for instance, states that earlier fishing lines—made from hemp and other natural fibers—break down quickly in the marine environment. France disagrees. Such ropes were often impregnated with dye or tar to help them last, or even reinforced with braided wire.

“No fisherman or mariner is going to use something which is going to break down overnight,” says France.

When presented with France’s ideas, NOAA spokesman Jonathan Shannon says experts agree anything left in the ocean could present an entanglement hazard for marine life, but the problem has escalated with the use of plastic gear, which is stronger than earlier lines, and consequently brings a higher likelihood of injury or death for marine mammals.

Scott Landry, director of the entanglement response team with the Center for Coastal Studies, says he has “no doubt there has been an entanglement problem for as long as humans have been setting rope-based gear—plastic or not.”

If some sea monster sightings are indeed signs of marine entanglement, it means discarded fishing gear has been endangering marine creatures for centuries longer than thought.

This, says France, is one of the reasons he wrote his papers in the first place—to let scientists, fishers, and others know that people may have “been influencing things in a deleterious way for much longer than they think possible.”