Seen from the air near Kwakume Inlet on the central coast of British Columbia, the milt of spawning herring turns the water white. The annual phenomenon fuels myriad food webs in the ocean and on land. Photo by Grant Callegari

Growing up on the east coast of Vancouver Island, British Columbia, in the 1980s, biologist Caroline Fox marveled when the herring returned each spring to spawn. The exact timing was always different, she recalls, but they would appear suddenly in the hundreds of millions. In this annual spectacle, a single female can lay up to 10,000 adhesive eggs that stick to kelp, eelgrass, boulders, and gravel. The males release fertilizing milt in vast clouds, turning the ocean white over tens of kilometers for nearly a week. When the eggs ripen and hatch a couple of weeks later, an explosion of biomass enriches the coast, and millions of seabirds and a vast supporting cast including black bears and gray wolves gravitate to the spawn like gluttons at an all-you-can-eat seafood buffet.

Fox never forgot the phenomenon. Years later, as she studied biology, she came to see parallels between herring and the seasonal migrations of salmon: in the same way a big salmon run delivers marine nutrients to organisms on land, this abundant pulse of herring transfers food and nutrients across ecosystems.

Massive herring spawns were once common along many parts of the British Columbia coast, but by 2009, when Fox was studying herring for her PhD with the University of Victoria and the Raincoast Conservation Foundation, things were much different. Thanks mostly to industrial fisheries beginning in the 1960s, Pacific herring that once spawned on the shores of Haida Gwaii, the central coast, and western Vancouver Island are now so depleted that most of these areas are closed to fishing. (The Strait of Georgia stock remains relatively healthy.)

Beginning in 2009, Fox launched a two-year experiment during which she visited beaches before and after herring spawns in Quatsino Sound on northwest Vancouver Island. Her question: to what degree are these spawning events fertilizing the wider ecosystem? 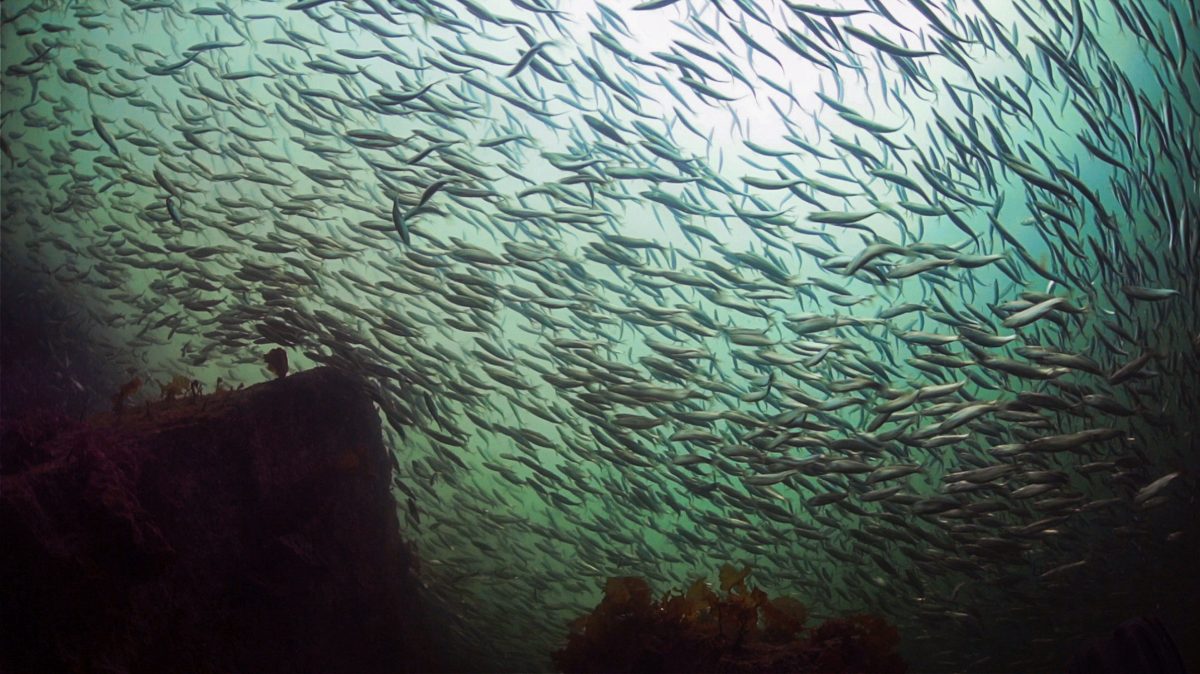 The eggs, milt, and bodies of vast schools of spawning herring bring a pulse of food and nutrients to coastal ecosystems. Photo by Grant Callegari

Fox collected samples from 10 species on or near the spawning beaches, including giant kelp and smaller algae, seagrasses, and a number of invertebrates, such as limpets, whelks, and amphipods. She measured particular isotopes of carbon and nitrogen in these organisms, comparing the levels to samples taken on beaches with no herring spawn. Tracking nitrogen-15, for instance, helped pinpoint the source as coming from the ocean since this isotope occurs in higher concentrations in the ocean than in the air.

Fox found that the algae, seagrasses, and invertebrates on herring spawn beaches had more nitrogen-15 than those living in locations where herring don’t spawn. The results provide evidence, she says, that herring-derived nutrients enter nearshore and intertidal food webs at multiple levels.

One value of the work, says Fox, is that it presents scientific evidence about the wider role played by herring across ecosystems, information that can inform the management of BC herring fisheries. This is important because while the past 20 years have seen a flurry of research on how spawning salmon transfer nutrients from the ocean to terrestrial ecosystems, there remains a paucity of science documenting the contribution of herring spawn. At present, Fisheries and Oceans Canada manages herring as a single species without consideration for the myriad species they appear to support.

Scott Wallace, a marine biologist at the David Suzuki Foundation, says Fox’s inquiry is “fascinating” because it provides quantitative information about how herring nutrients move into the nearshore ecosystem. “The research provides further support for managing herring with conservative harvest levels that allow for herring to fulfill their ecosystem role,” he says.

Now a postdoc at Dalhousie University in Halifax, Fox’s fascination with herring, and their little-known role as a fertilizer of ecosystems, continues. That function includes what she calls the “tremendous stinking, rotting phase of the spawn [on the beach] that can knock you down at 100 paces.

“That smell is part of the biological process of recycling all these nutrients.”