The Napoleon wrasse is a large reef fish from the Indo-Pacific region that’s prized as a high-status seafood dish in Hong Kong and mainland China. Photo by WaterFrame/Alamy Stock Photo

The Napoleon wrasse is one of the world’s biggest reef fish. Reaching nearly two meters in length, it gleams in radiant blues and yellows, has two distinct lines extending from each eye, and a hump on its head reminiscent of the famous forelock of the French general by the same name. Its general expression is glum, with a dash of alarm, fittingly reflecting its endangered status. One of these sad sacks can cost up to US $250.

The price tag makes the fish, also called the humpback wrasse, a prime target for trafficking, particularly in Hong Kong and mainland China, where the fish is reserved for expensive banquets and dinners to display a host’s high social status. Traditionally, banquet fish like the Napoleon wrasse are held in restaurant aquariums before they become a meal. Despite the Napoleon wrasse’s endangered status, some Hong Kong establishments regularly stock the fish.

To pierce the world of shadowy suppliers, marine biologist Yvonne Sadovy has investigated a number of cargo ships over the past four years in an attempt to trace the fish’s journey from reef to dinner plate.

Found exclusively in the Indo-Pacific region, Napoleon wrasses live for up to 40 years and reproduce later than most other commercially traded coral reef fish, making the species vulnerable to overfishing. The fish has been protected by the Convention on International Trade in Endangered Species of Wild Fauna and Flora (CITES) since 2004.

A large number of exported Napoleon wrasses come from Indonesia’s Anambas Islands, where locals catch the young fish and fatten them in ocean cages for four or five years before transporting them to market. To thwart illegal fishing, Indonesia allows export by air only. In 2016, the country capped exports at 2,000 fish a year. (The export cap for 2017 is unavailable.)

Sadovy, who lectures and researches marine issues at the University of Hong Kong, visited the Anambas Islands in 2013 to research the local fishery, where fishermen catch wrasses on reefs and raise them in permanent net pens that stretch along part of the coast. While there, Sadovy observed a hidden Napoleon wrasse export market in action. 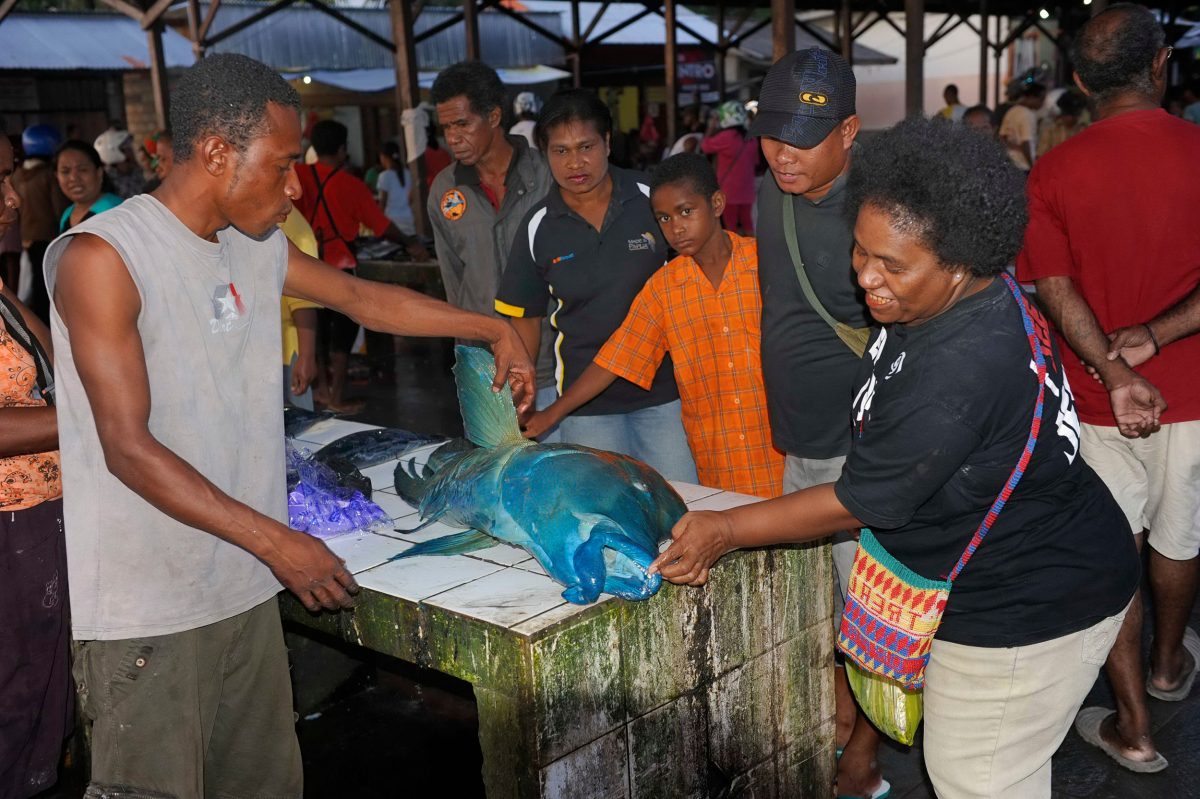 The Napoleon wrasse is on the International Union for Conservation of Nature’s Red List of Threatened Species. Despite its status, there is a thriving market for the fish in Hong Kong. Photo by imageBROKER/Alamy Stock Photo

When a ship materialized to collect the caged fish, she watched fishermen transfer the wrasses from the pens to small containers on the ship. The scientist was allowed to board the Hong Kong-based Cheung Kam Wah to observe the operation. Later, the ship left with a load of the protected fish.

Back in Hong Kong, Sadovy investigated this apparent smuggling by contacting the government authorities. All she found was that unmasking the ship’s owners was practically impossible, and both the customs and the marine police said they either didn’t recognize the boat or could not release details due to confidentiality.

After spending two years wading through Hong Kong’s various regulations—or lack thereof—and trying to unearth vessel owners, in late 2015, Sadovy discovered an online, open-source tracking system that follows ships by using their radar data. While Hong Kong’s marine department does not provide tracking information for ships, Sadovy managed to independently obtain the necessary information to track legs of certain vessels’ journeys through the online system. She discovered that some ships included regular stops at a fish farm on Lamma Island, south of Hong Kong Island, and Hong Kong Island’s famed Aberdeen Harbour—home to a floating village of junks and a large fish market.

Sometimes ships moved up to the Yantian District on mainland China. Once there, for some unknown reason, the signal was lost. It seemed to Sadovy from electronic tracking information and sightings that some form of live seafood is being transported from Indonesia to Hong Kong and sometimes to mainland China.

In addition to the Lamma Island fish farm, Hong Kong has 26 government regulated “fish culture zones,” where vessels can temporarily offload and store live fish that are legally caught. While the fish farms work, in theory, to promote local mariculture, the problem is that these zones are not well monitored. It would be easy to hide smuggled fish.

Hong Kong’s Agriculture, Fisheries and Conservation Department (AFCD) administers a permit system for the Napoleon wrasse. By law, a Napoleon wrasse must arrive alive in Hong Kong only by air from Indonesia, and each fish must be documented. If a Napoleon wrasse is sold, the vendor must report the sale to the AFCD. The agency allows a restaurant to sell up to 30 Napoleon wrasses over a three-year period.

In a restaurant tank, a Napoleon wrasse generally lives for three weeks; penned in an ocean, at the right temperature, it can live for years, growing to market size. Once a wrasse becomes dinner, a restaurant can easily replace it without reporting the sale. 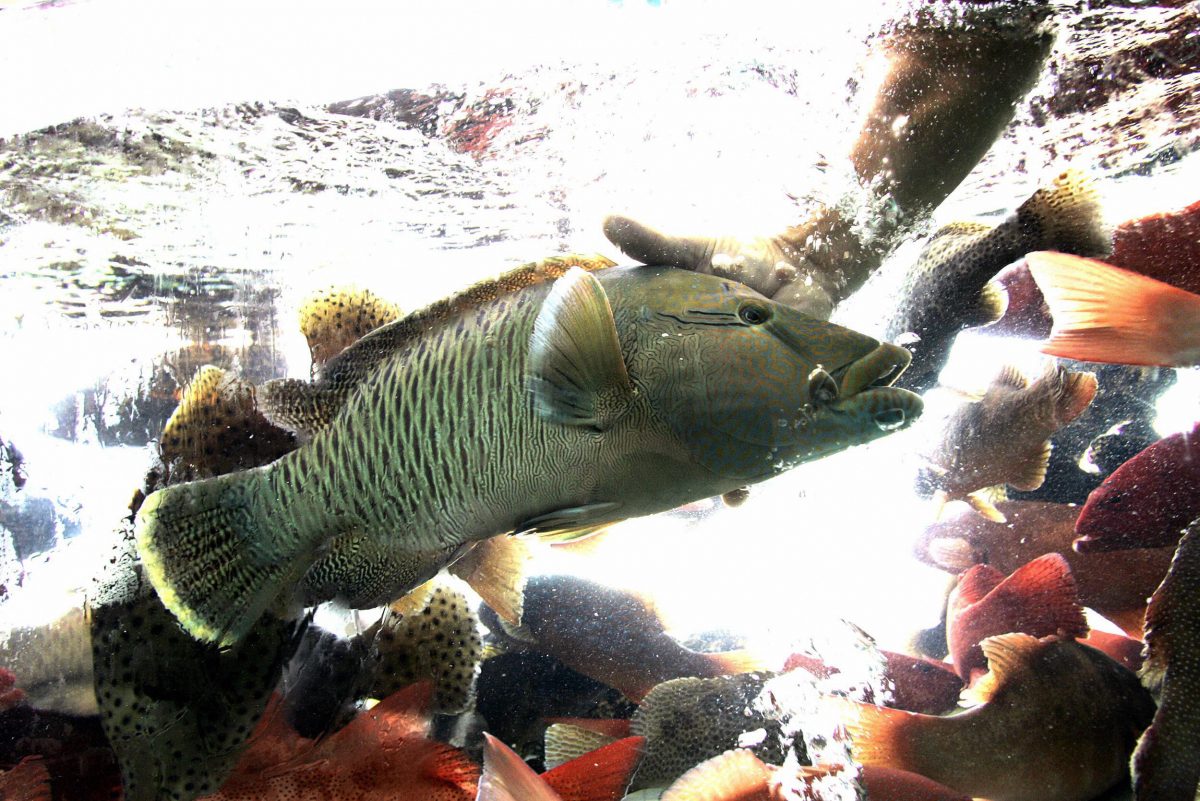 Napoleon wrasses are held in restaurant tanks until they’re ready to be consumed by diners, who pay upward of US $250. Photo by Peter Parks/AFP/Getty Images

Addressing the enforcement of permits, AFCD spokesperson Vivien Chan writes in an email: “Staff of the AFCD conduct inspections to licensed premises from time to time to ensure there are no irregularities.”

Chris Wilson, a former superintendent with the Hong Kong Police Force who now runs a private investigation company, has investigated the AFCD’s permitting system. He believes the vendors work around the cap on fish by exploiting a laxity of monitoring.

As further evidence that this is how Napoleon wrasses make it to market, a 2016 report by the International Union for Conservation of Nature (IUCN) and TRAFFIC, an international network that monitors the wildlife trade, revealed that Hong Kong’s restaurants and fish suppliers had an inventory of at least 1,100 live Napoleon wrasses in 2015. Not one of those fish was documented.

To better regulate Hong Kong’s live fish trade, there would need to be changes made to the law—and that would require lobbying the legislature. But in Hong Kong, almost half of the city’s legislators are chosen by business industries, and are not publicly elected. These representatives have little incentive to change the law.

“The government doesn’t want to stand up to the fishing sector,” Sadovy says. “They’re a powerful sector.”

The scientist says she’s almost ready to provide her evidence of a black-market fish trade to government officials, and she hopes that her research will help protect the fish and improve traceability.

Those tasks are tough. Another problem conservationists face is cultural norms.

Hong Kong doesn’t consider wildlife smuggling a serious crime. The domestic ivory trade will be banned, but not until 2021—lagging behind mainland China, which saw a complete ban at the end of March 2017. And despite public outcry, Hong Kong is still one of the world’s biggest markets for shark fin soup, another high-status dish often made from endangered species.

Yet, despite all this, Sadovy sees some hope for the Napoleon wrasse: there has been an increase in enforcement and prosecutions for illegal possession of the fish by the AFCD. The big fish with the rather gloomy expression may yet have something to smile about.