The XPRIZE is a nonprofit organization designed to foster innovation in various fields—including space, oceans, energy, and robotics—through public competitions. The Shell Ocean Discovery XPRIZE, sponsored by Royal Dutch Shell, is one of 18 competitions launched by XPRIZE to date. The first was a US $10-million Ansari XPRIZE for suborbital spaceflight that took place between 1996 and 2004. Photo courtesy of XPRIZE

Last week, the Shell Ocean Discovery XPRIZE, a contest sponsored by Royal Dutch Shell plc, awarded US $4-million to GEBCO-NF Alumni for demonstrating the best technology for remotely and autonomously plumbing the world’s oceans. It was the culmination of a three-year battle of the brains that resulted in uberadvanced maps for accessing the Earth’s final frontier—the deep ocean.

Five finalist teams were competing for the prize, and all were tasked with mapping a 250-square-kilometer area of seafloor in less than a day using equipment that could operate without human intervention. The measurements needed to have a resolution of five meters or higher, meaning that each pixel in the final image should correspond to a five meter by five meter piece of the real world. And, the raw data had to be processed and turned into useable imagery within just 48 hours.

“By 2030, all the world’s oceans will have been mapped,” says Jyotika Virmani, the leader of the Shell Ocean Discovery XPRIZE. The forthcoming discoveries of previously unseen seamounts, faults, deep-sea sand waves, shipwrecks, and new deep-sea biological species—the “aliens on our planet”—will happen precisely because of the technologies this marathon contest helped bring to fruition, Virmani says.

GEBCO-NF, an international consortium of scientists, took an interesting approach that leaned on heavily modified versions of existing technology. The team used an autonomous underwater vehicle (AUV) called the Hugin, which was developed decades ago in Norway. Though not exactly groundbreaking, the AUV had proved its worth. 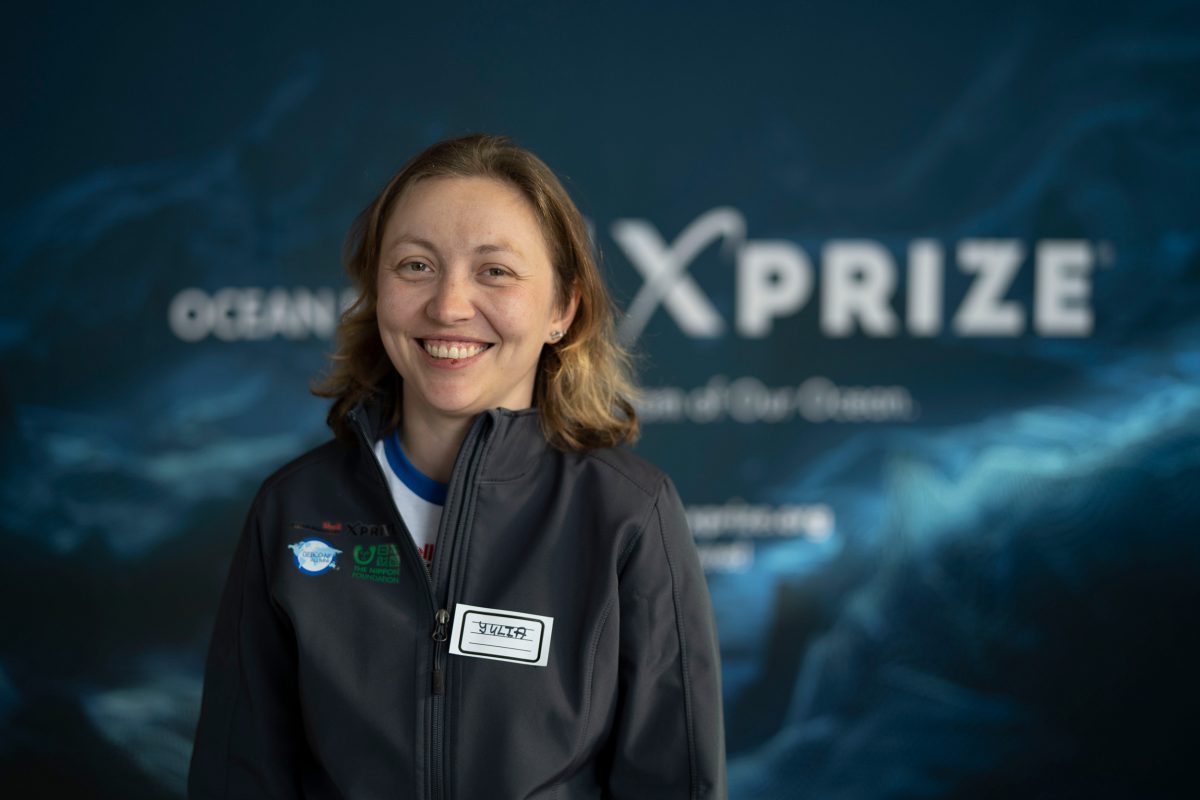 The winning team’s 15 members, including team leaders Yulia Zarayskaya (pictured) and Rochelle Wigley, are all alumni of the University of New Hampshire’s postgraduate program in ocean bathymetry. Photo courtesy of XPRIZE

“We did not want to reinvent the wheel, but leverage existing technology to the extent maybe nobody had used before,” says Yulia Zarayskaya, a geologist at the Russian Academy of Sciences, and one of GEBCO-NF’s team leaders.

The team equipped its AUV with two extra scanners: a multibeam echo sounder, a type of sonar useful for charting the seafloor; and a side-scan sonar unit, which is able to quickly produce large images of the seabed. Because the contest required the entire mission to be carried out autonomously, the scientists then put the submersible under the command of a prototype* 11-meter-long unmanned surface vehicle (USV) equipped with a range of technologies such as acoustic, radio, and satellite links, as well as Wi-Fi and cameras.

On November 9 and 10, 2018, the days of GEBCO-NF’s winning test, the team sent its AUV, riding aboard the USV, out from the shores of Kalamata, a town in southern Greece. The site was an ideal testing ground, as it allowed the teams with shore-based approaches to deploy their experiments easily to a deep-sea environment, as the water just off shore is quite deep. Once GEBCO-NF’s autonomous vehicle reached the diving site, the larger vessel pushed the subsea robot into the water with a conveyor belt and the deep ocean exploration began.

Among the ocean XPRIZE finalists, the GEBCO-NF team is unlike any other. Its leaders are both women—alongside Zarayskaya is University of New Hampshire engineer Rochelle Wigley. The team comprises members from 14 different countries.

The group is also made up entirely of graduates from the University of New Hampshire’s postgraduate program in ocean bathymetry, launched in 2004 by the General Bathymetric Chart of the Oceans (GEBCO), a nonprofit scientific effort that operates with the support of the International Hydrographic Organization and the United Nations. Team members saw the competition as an exciting opportunity to bring together alumni from different years of the program’s history. Fast forward to 2019, and the team counts 15 members, several of whom, being situated in countries from Russia to Brazil, have never met in person.

GEBCO-NF’s members collaborated from their home countries through email and Skype, navigating time-zone complications, language barriers, and cultural differences. “A member from Israel might vigorously go for solutions during the brainstorming process, while a member from Japan might keep quiet, combine ideas, and opinionate at a later stage,” says Zarayskaya. She is quick to add that this diversity was their biggest strength. The collision of different perspectives engendered innovation, she says. 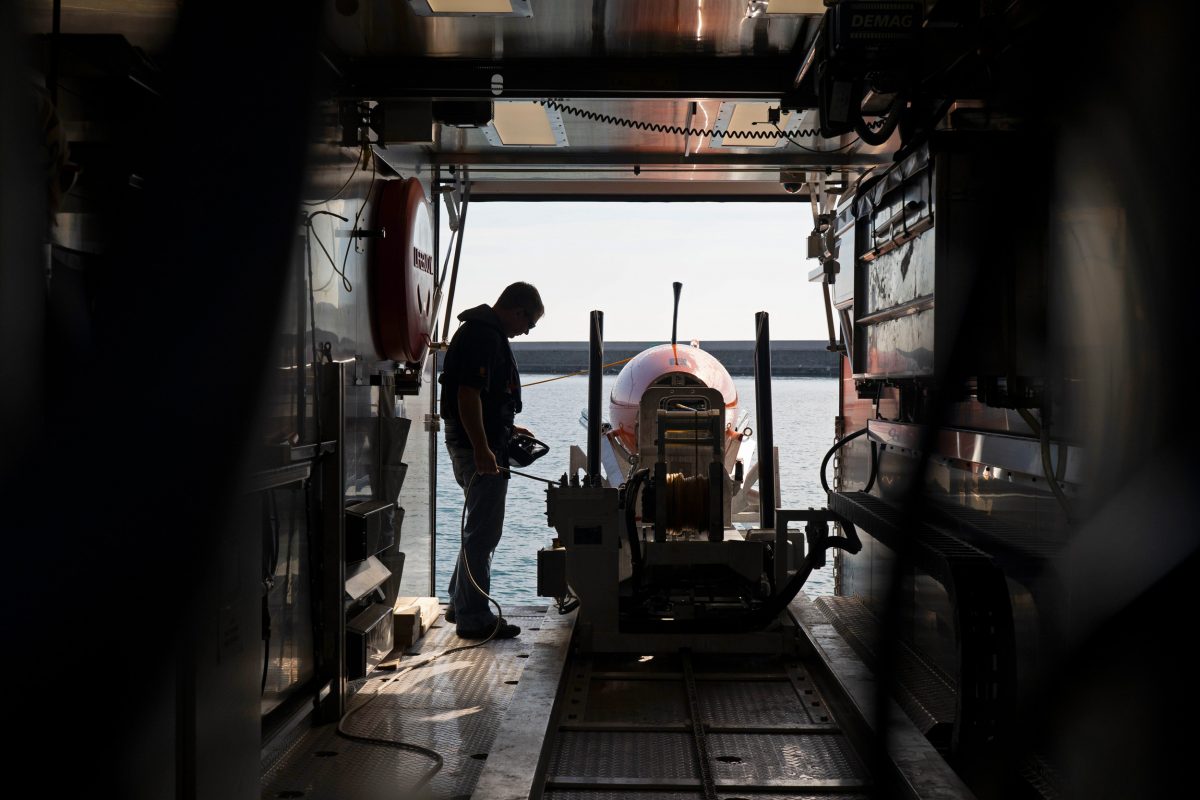 For the team’s successful design, GEBCO-NF used an autonomous submersible and an autonomous surface vessel to rapidly scan and photograph the seafloor off Kalamata, Greece. Photo courtesy of XPRIZE

“What this team did was exceptional,” says Oscar Schofield, a biological oceanographer at Rutgers University in New Jersey who was not involved in the contest. GEBCO-NF’s AUV had to work thousands of meters deep, at very high pressure, in a dark and cold environment, he says.

Schofield says GEBCO-NF won because it managed to process and put together vast amounts of data in a timely way. Indeed, such high-resolution maps were science fiction a decade ago.

The innovations in robotics made by GEBCO-NF and the other teams will yield benefits for everything from managing fish to predicting storms, locating the source of an oil spill, hunting shipwrecks, and measuring the salinity and temperature of water—crucial information in studying and fighting climate change—he adds.

Perhaps of particular interest to Royal Dutch Shell, these advances will also allow deep-sea mining and oil exploration firms a knowledge of the deep ocean and hotspots of exploitable resources to a degree that was previously unfathomable. “Searching for hotspots is a high-risk enterprise, and these maps can save Shell billions of dollars,” Schofield says.

Meanwhile, the team members of GEBCO-NF are on a roll of creativity. “The money we received will be reinvested in developing this technology and other new projects around ocean mapping and ocean sustainability,” says Zarayskaya.

Last April, her team made one more breakthrough: it had an unmanned vessel deliver oysters from the United Kingdom to Belgium through the English Channel. “It was the first unmanned commercial shipping operation ever,” says Zarayskaya. “And we got beers back in exchange for the oysters.”

*Correction: This story originally said that the unmanned surface vehicle (USV) used by GEBCO-NF was a heavily modified version of a pre-existing vessel. The USV, known as a Sea-Kit, was actually designed and built for the team by Hushcraft.