SnotBot is a drone that has been modified to collect whale spray for scientific research. Photo by Ocean Alliance

“I have a challenge for you,” Iain Kerr, CEO of the conservation organization Ocean Alliance, told members of the Ipswich Tigers high school robotics team.

The high school students were visiting the nonprofit’s office in Gloucester, Massachusetts, this past May to share ideas with Kerr’s robotics club, which meets there every Wednesday night. On top of meeting fellow enthusiasts and seeing Kerr’s state-of-the-art lab, they also got an assignment.

For the past few years, Kerr explained, Ocean Alliance has been developing a technique to collect DNA, hormones, and other important biological markers from whale “snot”—the emissions from a whale’s blowhole. To accomplish this task, Kerr has been flying a drone* that he dubbed “SnotBot” across the ocean and over the backs of dozens of whales in three expeditions around the world.

Collecting the whale snot is no easy task. “The snot comes out in a big V,” Kerr says. “At the bottom of the V, the snot is condensed, but it’s a very small window. At the top, it’s very wide but the snot is dispersed.” The goal, he says, is to fly about three meters above a whale, allowing the snot to be collected in a simple petri dish affixed to the drone. That distance, biologists and federal licensing authorities agree, is both safe for the animal and effective for scientific collection. 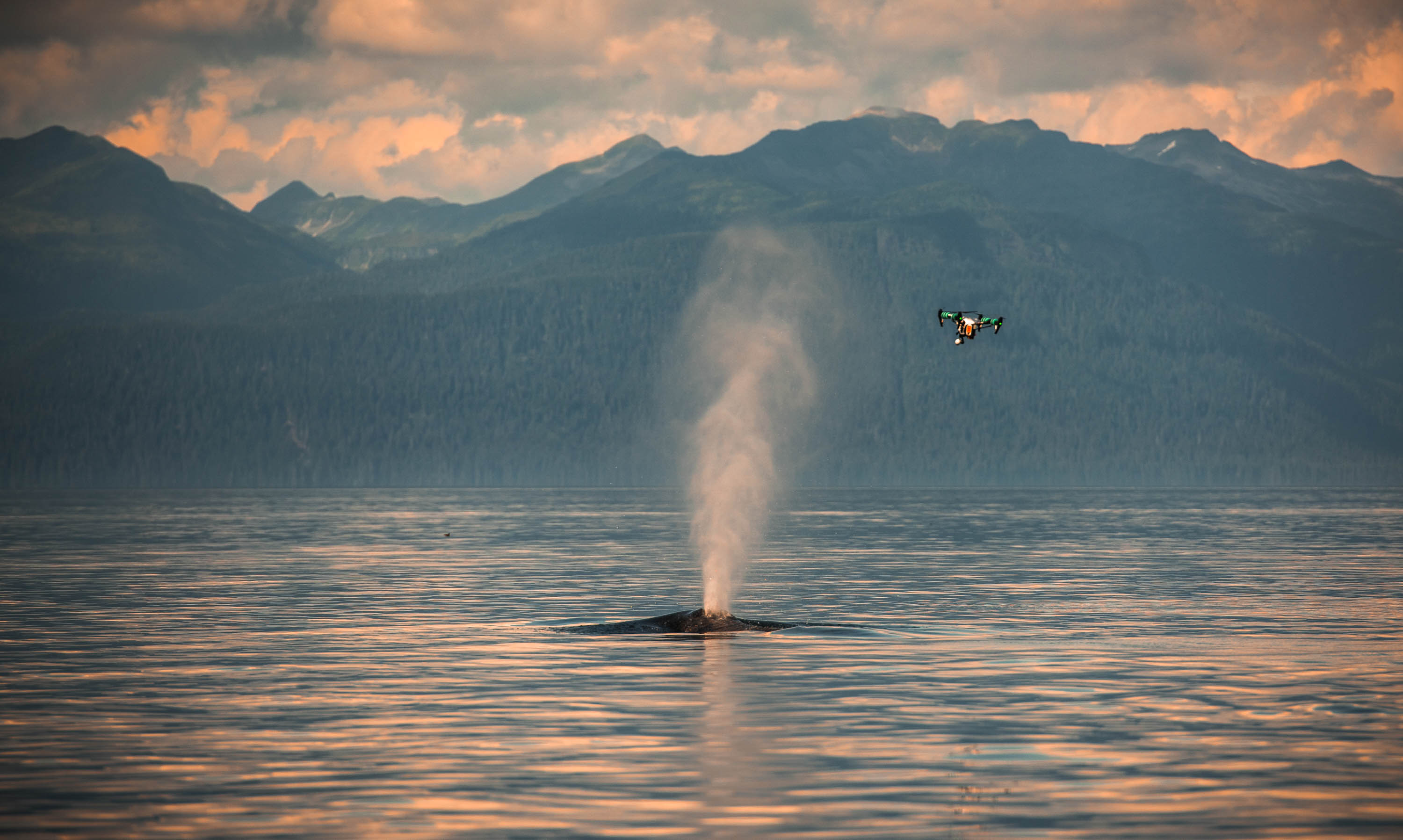 The SnotBot drone collects “snot” from a whale in Alaska. Photo by Ocean Alliance

But flying a drone exactly three meters above a swimming whale in the middle of the ocean presents challenges. The drone’s pilot is half a kilometer away on a boat, so eyeballing the height is almost impossible. The drone’s camera, meanwhile, doesn’t provide a stereoscopic image like human eyes. “There’s no depth perception at all,” Kerr says.

SnotBot launched in July 2015 with a Kickstarter campaign, and Kerr has kept the project’s crowdsourcing spirit strong. He asked the visiting students if they could come up with a solution to help fly SnotBot at a predictable altitude.

“We just ran with it,” says high school senior Roman Gadbois, the Tigers’ project leader, who worked with fellow students Annabelle Platt (no relation) and Peyton Fitzgerald on mechanical design, and Filip Kernan on programming.

Their work started off with a lot of research. The first thing they found was that DJI Phantom drones* use a barometer to estimate height, which Gadbois says wasn’t working well enough for SnotBot. “Barometers don’t really work over water because waves put the air up into the drone and then the drone detects the change in air pressure and could drop.” That’s not a good solution for a US $3,000 piece of equipment flying above a living creature.

Next they tried GPS, but that only provided accuracy within about three meters. “If it tells us we’re six feet [1.8 meters] in the air, that could theoretically be six feet underwater,” Gadbois says. Ultrasonic altimeters, which use bursts of bat-like sound waves, also failed, because the waves were skewed by the water. 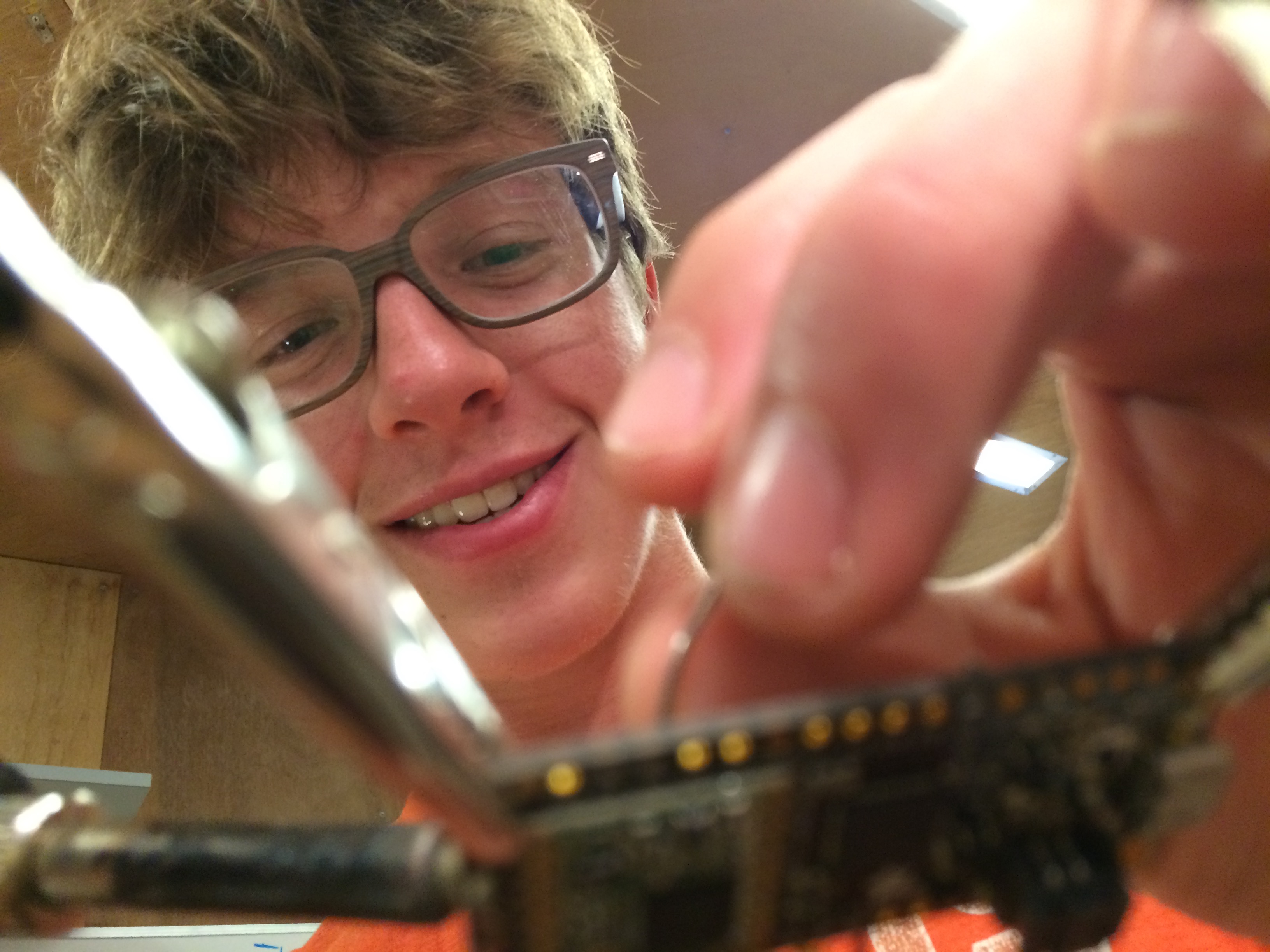 Roman Gadbois is one of the teens who worked on SnotBot with the Ipswich high school robotics team. Photo by Ocean Alliance

Finally they hit upon a solution, a laser altimeter, which they found could measure the distance accurately and effectively—kind of like a police laser speed gun, but for calculating width. With this in hand, they connected the altimeter to two microcontrollers, a soundboard, and a radio. Together, their solution not only measures the distance, it also provides a constant audio cue to the drone pilot telling them how high they are flying.

Figuring out how to connect all of this equipment to the drone fell to Platt. Their first prototype was fairly simple. They jury-rigged a Tupperware container, filled it with tech and screwed it onto the drone. “That was our proof of concept,” she says. Platt then turned to computer-aided design and 3D printing to fabricate the rest of the housings and attachments.

They’re still working out the final kinks in the programming and finalizing the waterproofing and hope to have everything ready before Kerr’s next set of expeditions starting in March 2017.

All of this obviously comes as a bit of a thrill to Gadbois, who says he hated mathematics before he joined the robotics club as a sophomore. The SnotBot project only served to cement his newfound love of engineering “I suddenly got a chance to help change something,” he says. “I get to help contribute to helping the world, which is not something, really, that everybody gets to do.”

Kerr calls the SnotBot “a five-in-one tool,” providing not just biological samples, but also video of whale behavior, photo identification, photogrammetry for whale sizing, and an inspiring bit of science for the public—especially kids like the Tigers.

“You wouldn’t expect to advance the science that quickly,” he says. “I’m over the moon.”

Correction: An earlier version of this story specifically referred to the SnotBot as a DJI Phantom drone. Ocean Alliance has used both DJI Phantom and DJI Inspire drones.