Short-tailed albatrosses are endangered on the US west coast and vulnerable worldwide. When a fisher’s hooks killed one, it sparked an examination of how to prevent similar deaths. Photo by Projeto Tamar Brazil/Marine Photobank

On April 11, 2011, a seabird drowned in fishing gear off the coast of Oregon. While this happens quite often, the death of this particular bird—an endangered short-tailed albatross inadvertently hooked by commercial fishermen—set off an alarm bell heard by researchers and regulators alike.

“It kind of woke everybody up,” says Edward Melvin, a fisheries scientist with Washington Sea Grant. It also eventually led researchers to recognize that fishermen held one surprisingly simple solution to an ongoing by-catch problem—albatrosses getting caught in fishing gear.

Albatrosses are known to swoop into the sea to steal bites off a descending fishing line’s baited hooks. The birds get snagged and drown, often enough to be a worrisome trend. Between 2010 and 2013, an estimated 50 to 215 of a different albatross species—the black-footed albatross—were hurt or killed each year by commercial fisheries off the Washington, Oregon, and California coasts. Most of the deaths were caused by the black cod fishery’s longline hooks, confirming what Melvin and his colleagues had previously predicted.

But when a black cod fishing boat hooked a short-tailed albatross, it spurred regulators in the United States to take a closer look at ways to avoid seabird deaths in this fishery.

Melvin and his colleagues figured they were already on the right path. The year before the short-tailed albatross’s death, they had begun a bird-deterrent study with seven black cod longline fishing vessels. The focus was on a technology known as streamer lines that is already required on fishing vessels in Alaska.

Streamer lines hang from a high point on a boat and drag behind it. Thin, orange tubes dangle from the lines and deter the seabirds. These frilly streamers are “sort of a mobile scarecrow,” Melvin says. In Alaska, research shows that towing a pair of streamer lines can drop seabird by-catch by 88 to 100 percent.

Bringing this technique south seemed like a no-brainer, and in 2014, the US National Oceanic and Atmospheric Administration (NOAA) proposed requiring streamer lines on larger vessels in the black cod longline fishery. NOAA and its partners also held workshops to hand out free streamer lines and teach fishers how to avoid accidentally catching albatrosses. 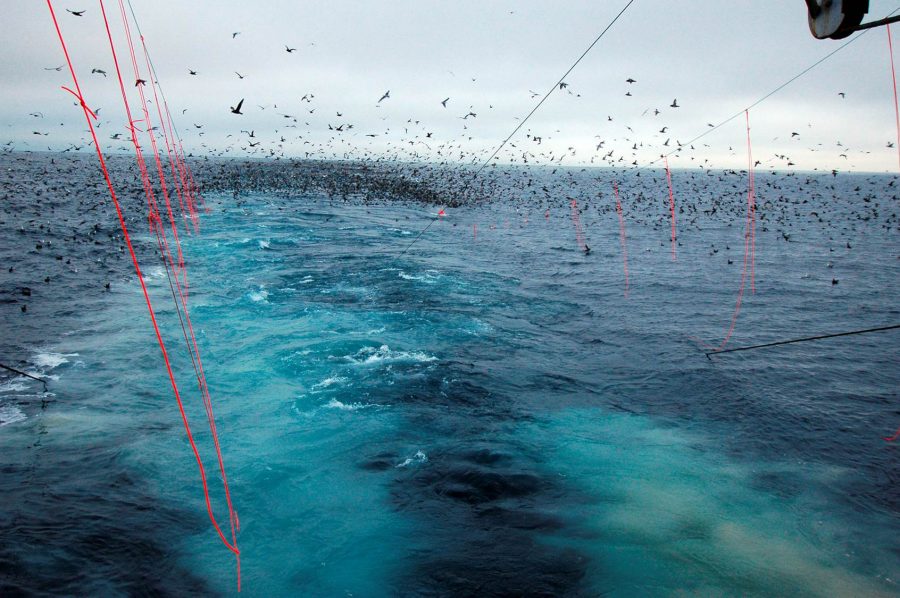 Birds interpret streamer lines as a barrier separating them from the baited hooks below. Photo by Ed Melvin/Washington Sea Grant

But just because a solution works in one place doesn’t mean it will transfer to another. In Alaska, fishers deploy longlines with weights that quickly pull hooks to the seafloor where black cod and other ground fish live. The few hooks that are near the surface are protected by streamers. But in Oregon, some fishermen intersperse those weights with floats along their lines to keep the hooks just above the seafloor, and away from pesky hagfish and sand fleas. Unfortunately, these floats also cause the hooks to sink more slowly—keeping them within albatross striking distance for longer than with a weighted line alone.

Tony Pettis, a black cod fisher of roughly 20 years, attended one of Melvin’s workshops in Newport, Oregon, in 2014. Like most fishermen there, Pettis used floated longlines on his vessel, the Heidi Sue, and he knew a better, easier way to avoid albatross by-catch.

“I stressed to Ed that we’ve been doing this a long time and we’ve already found ways to avoid catching the albatross,” Pettis said. “We just set [our gear] at night.”

Albatrosses are visual hunters that mainly search for food during the day. By dropping their baited longlines before dawn, Pettis and other fishermen would dodge peak albatross mealtimes. Intrigued, Melvin’s team turned to by-catch data gathered by fisheries observers aboard west coast vessels to see whether Pettis’s approach held up. It did.

“The by-catch rates were 30 times lower at night than during the day,” says Melvin, who was surprised by the difference. In addition to catching fewer albatrosses, the black cod they caught were more often the right target weight. In all, fishers kept 40 percent more catch when they set their hooks at night. Plus, researchers didn’t see a jump in by-catch of other species, or an increased risk to the safety of fishermen from working in the dark. As Melvin puts it, this one simple shift achieved “the rare win-win that everybody dreams about in the conservation world.”

Pettis is glad the science proved him and his fellow nighttime fishermen right. He says he’d rather fish at night than use streamer lines, which can sometimes become tangled in his gear. And he may soon have his way. Based on Melvin’s research, NOAA and the US Fish and Wildlife Service are now recommending that fishermen have the option of fishing at night instead of towing streamers to avoid hooking albatrosses. At a November 18 meeting, the Pacific Fishery Management Council will consider turning that recommendation into regulation.

Still, Pettis doesn’t want to push any one technique on fishermen elsewhere. Instead, he emphasizes the importance of giving fishermen like him a voice—because they just might know something the researchers don’t.