Admit it, this megamouth shark, caught by fishermen in the Philippines, is pretty cute. Photo by STRINGER/PHILIPPINES/Reuters/Corbis

For 28 years, Discovery Channel’s annual elasmobranch extravaganza has tantalized viewers with images of the oceans’ most powerful predators. Shark Week is the longest-running cable event in history, and the programming has been a boon to the popularity of sharks. And yet, right from the start and still to this day, marine biologists, environmentalists, and media critics have attacked the event’s fearmongering tone. In the past few years, criticism has ramped up in light of Shark Week’s turn toward pseudoscience.

Over its long run, Shark Week has been hesitant to make sweeping changes. Yet in recent years, the critical crescendo has built to the point where Shark Week is being regularly accused of having “jumped the shark.”

In January, Rich Ross, Discovery Channel’s new president, promised that Shark Week will address viewer concerns and shift the tone of its programming. If Ross is looking for a way to revitalize his channel’s most popular event, he need only look inward. One recent entrant into Shark Week’s tooth-filled spectacular has turned away from hungry great whites and long-extinct giants to provide sensationalism-free science that’s been a hit with both fans and critics. Alien Sharks, which will see its third episode as part of this year’s programming, focuses on the biology and behavior of the unusual, oft-forgotten sharks that swim the world’s oceans.

The sharks that appear in Alien Sharks are “some of the most amazing, bizarre, and unexpected creatures ever seen,” says Howard Swartz, the vice president of documentaries and specials with Discovery Channel. “This series delivers on taking viewers to places they have never been and introducing them to some of the most unique and mysterious creatures on earth.”

The great white may be Shark Week’s bread and butter, but according to Paul Clerkin, a student at the Pacific Shark Research Center who has appeared in the second and the forthcoming third Alien Sharks, it’s important for other species to get their time in the spotlight. “I very much think that less famous species need more publicity, more attention, and more research,” he says.

As Ross and the Discovery Channel work to shift the tone of their programming, the Alien Sharks series could be a model to build on. And that shift in tone matters for more than just ratings, says Jessica Myrick, a researcher with the Indiana University-Bloomington media school.

With all the attention it garners—last year’s Shark Week had 42 million viewers—the way that Discovery Channel talks about sharks has a big effect on the public perception of sharks, says Myrick.

“If someone asks you in a day-to-day conversation, ‘What do you think about shark conservation?’ you might respond calmly and coolly. But if someone asks you that same question right after you’ve seen a Shark Week clip where a shark tore apart a surfer, leaving the ocean waves full of blood, then you might have goose bumps on your arms and respond a lot differently,” says Myrick. 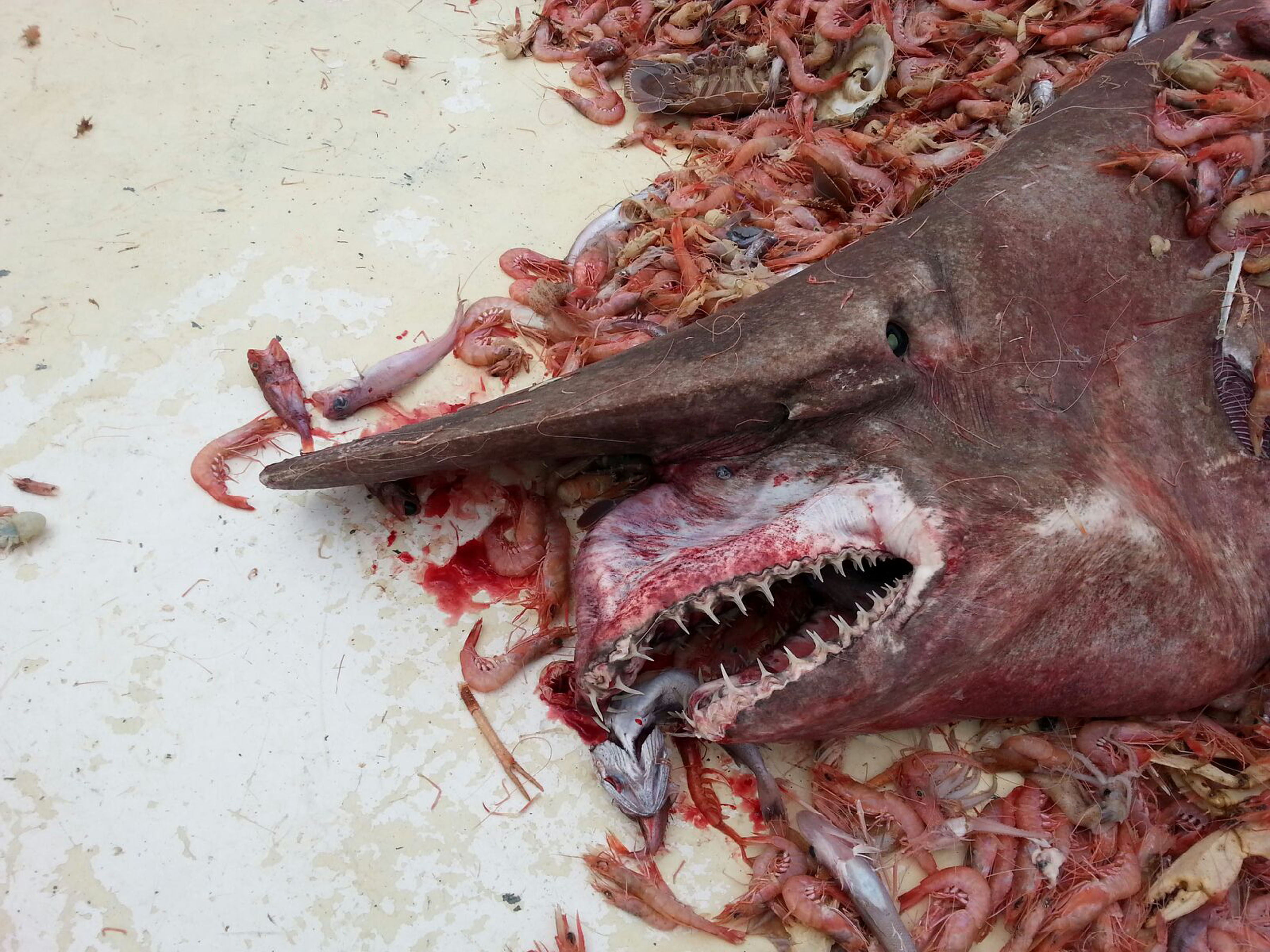 A fisherman caught this rare goblin shark off the Gulf of Mexico in April 2014. After a few photos were snapped, the shark was returned to the water. Photo by Carl Moore/NOAA/Splash News/Corbis

Alien Sharks, by contrast, attempts to trade fear for awe. Past entries in the Alien Sharks series have showcased the unusual feeding style of the goblin shark, a creature whose distended mouth can be bubblegum pink. Fewer than 100 megamouth sharks, a species with bioluminescent lips whose scientific name means “giant mouth of the deep,” have ever been seen by humans—including the one seen in the original Alien Sharks.

In the third Alien Sharks, which airs July 6th, the series will showcase more rare sharks, and the technology needed to get researchers to the deep-sea environments they call home. This year’s special will also focus on the first efforts to apply a telemetry tracking tag to a megamouth shark.

“I think it’s safe to say you should go ahead and get your hopes up,” says Clerkin. “If you are looking for an educational experience with real research and real expeditions, you’ll be happy with Alien Sharks: Close Encounter. I am totally excited about it because it is the kind of program that I wish was available year round.”