Beginning roughly 18,000 years ago, deep-ocean currents in the Pacific Ocean sped up drastically. This disturbance of the deep ocean caused carbon to flow from the sea into the atmosphere leading to even more warming. Photo by LOOK Die Bildagentur der Fotografen GmbH/Alamy Stock Photo

Oceans are sluggish. It can take hundreds of years for water to move from one part of the world to another. The North Equatorial Current in the North Atlantic, for instance, pokes east to west at a measly 200 meters per hour. But what if the oceans’ currents were to speed up? According to new research, that’s what happened beginning roughly 18,000 years ago, and it had a dramatic effect on the planetary climate. Now, scientists are worried that ongoing human-caused warming could drive the ocean to speed up once more.

At the end of the last ice age, from around 19,000 to 9,000 years ago, the climate was warming rapidly. Prompted by a subtle shift in the tilt of the Earth’s rotational axis, more sunlight hit the northern hemisphere in summer, kicking off a global thaw. According to new research, this warming caused the rate of the deep-water current flowing between Antarctica and the Gulf of Alaska, known as the abyssal Pacific circulation, to speed up by two to three times.

Before the warming, during the chill of the last ice age, it took roughly 2,000 years for water to sink near Antarctica, travel on the bottom of the sea all the way up to the North Pacific, rise, and return. New data gleaned from isotopic analysis of seafloor sediment cores collected from the Gulf of Alaska suggests that during the speed-up, this same journey took only 500 to 600 years. This sudden surge in the pace of the currents created a rapid stirring motion in the deep waters around Antarctica.

Until recently, scientists’ efforts to understand the role of ocean circulation in relation to climate change focused largely on the North Atlantic, primarily because it is well studied and substantial data exists for the region. But as researchers spend more time investigating the Southern Ocean around Antarctica, they’re realizing its key role in driving the climate, says Jianghui Du, an oceanography doctoral candidate at Oregon State University and lead author of the study. Half to two-thirds of the oceans’ global volume is controlled by processes in the Southern Ocean, he says. 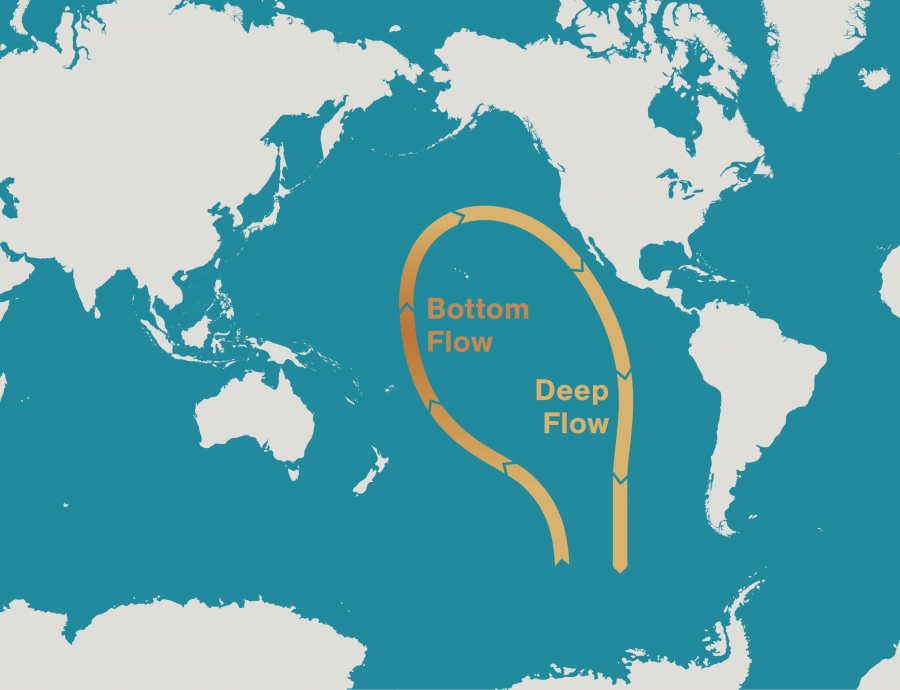 Cold, salty water in Antarctica sinks to the bottom of the sea forming Antarctic Bottom Water, which moves northward to the Gulf of Alaska. Here it warms slightly and rises, recirculating back south as Pacific Deep Water. Illustration by Mark Garrison

The oceans hold the world’s largest reservoir of carbon. When creatures such as plankton die, they sink and settle on the seafloor, often in the deep abyss, releasing carbon as they decompose. Scientists estimate there is 50 times more carbon stored in the deep oceans than there is in the atmosphere. If even a tiny fraction of these stores were to leak out, it would exacerbate ongoing warming.

Right now, the Southern Ocean is a carbon sink, absorbing carbon from the atmosphere rather than spitting it out. But if the circulation were to accelerate as it did sometime between 18,000 and 11,000 years ago, it could begin to emit carbon, which turns into carbon dioxide at the surface.

According to Alan Mix, a paleoclimatologist at Oregon State University and coauthor of the study, climate models are unclear on how this abyssal Pacific circulation will be affected by anthropogenic warming. Some models show the circulation speeding up, while others show it slowing down. This study provides critical confirmation that in the past, the ocean has responded by speeding up.

“Climate models are never 100 percent right,” says Katrin Meissner, a climatologist and climate modeler at the University of New South Wales in Australia who was not involved in the research. But scientists use such models to test hypotheses of what could happen with future climate by looking, in part, to the past. “We need to see how well our simulations fit with existing data, and there’s not much existing data,” she says. Any new insight, like that provided by this study, is “of big value for us modelers.”

The study’s authors can’t say for certain if ongoing warming will trigger the abyssal Pacific circulation to speed up, or how much of an increase in atmospheric carbon dioxide it would take to do so. Even if there is such a threshold or trigger, it’s unlikely we’d see the effects in our lifetimes, Mix says. Although even that is uncertain. “What we’re doing now to the climate, we’re doing much faster than the world did in those paleo conditions,” Mix says.

Yet the prospect of an exodus of carbon from the Southern Ocean, however remote, is critical to consider, says Mix. “The Paris climate accord worked out a budget of how much carbon we might be allowed to emit and still avoid really dangerous warning.” If carbon from the deep sea were to enter the atmosphere, it could tip the scale, counteracting any gains made through smart policy or technology.