Some, or at least one, of the brown bears in Alaska’s Katmai National Park and Preserve have taken to hunting sea otters. Photo by Matthias Breiter/Minden Pictures

For more than a decade, researchers on a remote stretch of Alaska’s coastline have watched brown bears scavenge sea otters. But as Dan Monson, a federal scientist and sea otter expert based in Anchorage, Alaska, scrutinized the carcasses left on the beaches in Katmai National Park and Preserve, about 400 kilometers southwest of Anchorage, he started noticing a strange, unexplained trend. Many of the dead animals appeared to be in their prime—they weren’t the juvenile or older otters one would expect to find dead—and more and more of them were showing up.

Following years of research, Monson and his fellow scientists have now confirmed that at least one of Katmai’s brown bears is preying on live sea otters—a previously undocumented behavior that speaks to broader ecological changes driven by the rebound of Alaska’s sea otter population.

“This is a supremely cool piece of natural history,” says Taal Levi, an Oregon State University ecologist who has studied bears and otters in Alaska but was not involved in this project.

By the end of the 19th century, the fur trade had wiped out sea otters along the coast of Katmai and most other areas of the western United States and Canada. But in 1911, the otters received federal protection in the United States, and their numbers have been increasing ever since. In 1989, Monson surveyed the population after the Exxon Valdez oil spill, finding that there were as few as 500 sea otters in the part of Katmai he was studying. Less than two decades later, however, that population exploded to as many as 7,000 animals. Now, sea otters are approaching their carrying capacity—the limit that their habitat can sustainably support.

In one way, scientists say, the increased number of sea otters is making life a little more difficult for Katmai’s bears since both eat clams. At the same time, the otters are ending up as meals for the adaptable bears.

“They seem to love the brains,” says Monson. “It’s stinky, but boy, they seem to like it.”

Many of the bears seem content to scavenge dead sea otters, but at least one has developed a taste for fresh meat.

Grant Hilderbrand, another Anchorage-based federal scientist and bear expert, uses GPS collars to track dozens of brown bears. In 2015, he noticed that one, known as #85, was spending months at a time on islands offshore, unlike the other bears that tend to stay on the mainland. When researchers darted the bear to retrieve its collar, Hilderbrand found a half-dozen seal carcasses nearby.

The carcasses were fresh and the backs of some of their skulls had been crushed—telltale signs that #85 had attacked them while they were alive. It was clear to Hilderbrand that the bear—a rotund, healthy sow with two cubs—had been killing the seals not scavenging them.

The next day, Hilderbrand and his colleagues flew over the bear in a helicopter and saw it swimming offshore. It was heading for a group of hauled out seals, cutting off their escape by hunting them from the water. The behavior was different from anything the scientists had seen before.

“The best part of being a scientist is when you get surprised,” Hilderbrand says. “This was definitely one of those moments.”

Hilderbrand talked about the discovery with Monson, who was independently tracking the unexplained increase in sea otter deaths, when the light went on: perhaps Katmai’s bears were responsible.

To test whether bears were hunting sea otters as well as seals, Monson built specially designed automated cameras that he clad in spiked housings to ward off any curious bears. He set them up to take photos every couple of minutes at a pair of sites where sea otters and seals were known to haul out.

While reviewing the hundreds of thousands of pictures, Monson began to see a pattern. Sea otters would haul out on shore, then a bear would arrive. The bear would stay with its head down for a half hour then leave. Then eagles would arrive to scavenge the remains of the kill, Monson says.

The most compelling image is one that Monson printed out and hung on his office wall: it shows a brown bear—apparently a different one than #85—with a freshly killed sea otter dangling from its jaws, brought from the haulout directly in front of the camera. 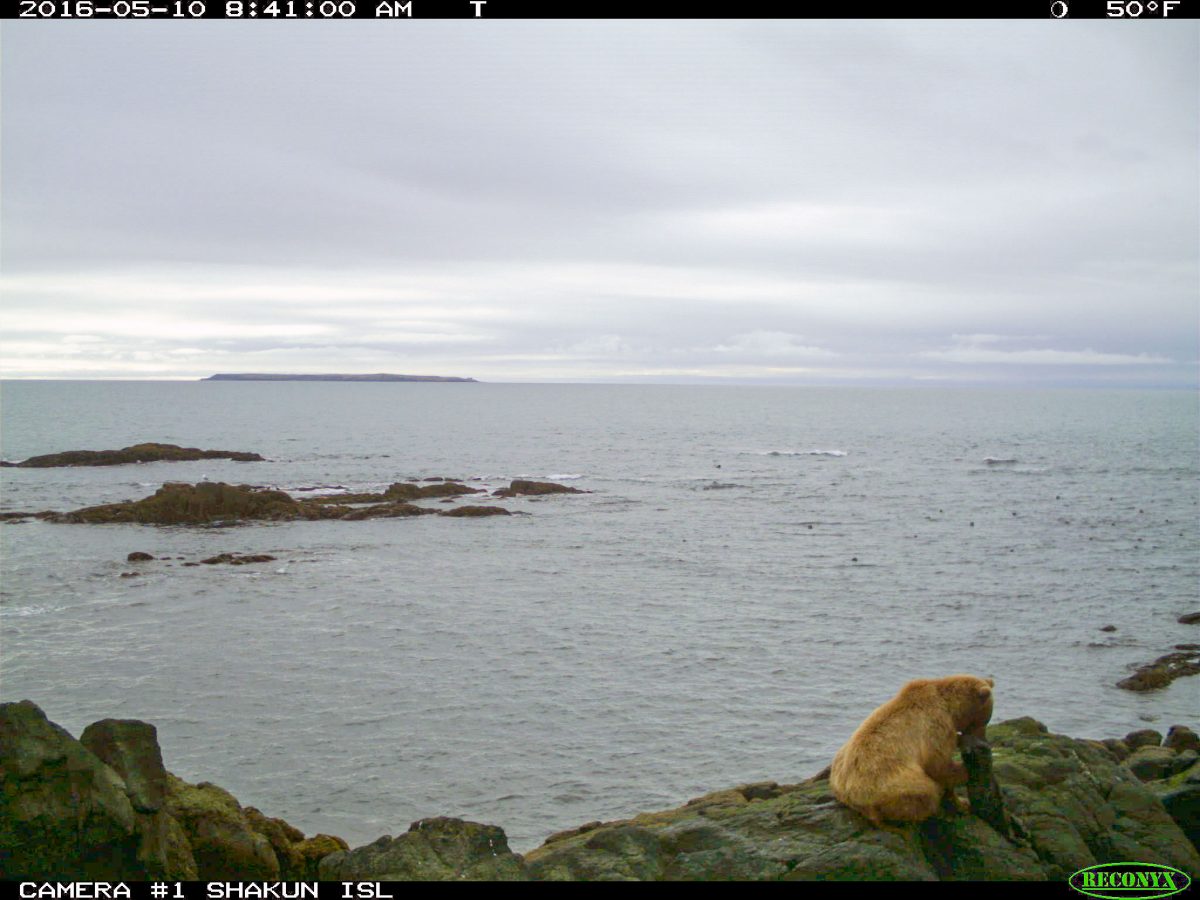 That photo is the clearest evidence Monson has of the phenomenon, but two summers of documentation have captured a number of similar events.

The scientists say they’re fairly confident there’s more than one Katmai brown bear preying on sea otters. Hilderbrand speculates that some of the bears have long fed on seals and simply added sea otters to their diets as the marine mammals returned to the area. But there’s more work to do to establish just how many bears are hunting otters.

The work done by Hilderbrand and others grew out of the 1989 Exxon Valdez oil spill, which fouled more than 1,600 kilometers of Alaska’s coast. The researchers wanted to understand how important Katmai’s clam beds are to the diets of bears, and how much effort land managers should put into protecting the beds in the event of another spill. The scientists expected to be documenting a natural area that was somewhat static, with stable relationships between predators and prey. But what they found instead was an ecosystem in flux, with an expanding sea otter population and bears that appeared to be taking advantage of it.

Katmai isn’t the only place where booming sea otter populations appear to be altering Alaska’s ecosystems. Some residents of the southeast part of the state complain that otters are depleting lucrative clam, urchin, and crab fisheries. And Levi has helped document how sea otters have increasingly become prey for wolves around Glacier Bay National Park.