Attacks by house mice are taking a devastating toll on the populations of critically endangered Tristan albatrosses and other seabirds on Gough and Marion Islands. Photo by Peter Ryan

Years ago, unsettling news emerged from the subantarctic: supersized mice were killing and eating chicks in one of the most important seabird colonies in the region. But according to the latest research, the mice’s carnage didn’t stop there. Now, researchers have documented mice eating adult seabirds, a discovery with potentially huge ramifications for the seabird populations.

Christopher Jones, a seabird researcher with the Royal Society for the Protection of Birds in the United Kingdom, was working on Marion and Gough Islands in 2017 and 2018 when he and his colleagues found three adult seabirds with gashing wounds, and 23 adults dead from suspected mouse attacks. “Obviously, it’s horrific,” Jones says.

On Gough Island, the victims were a critically endangered Tristan albatross and an Atlantic yellow-nosed albatross, and on Marion Island he found a northern giant petrel.

Gruesome to imagine, let alone watch, the recent investigations revealed that the mice were killing birds more than 300 times their size.

Sitting targets for starving mice, dedicated seabird parents let the mice nibble on their flesh while they steadfastly incubate their egg. “The birds barely react to defend themselves,” says Peter Ryan, an ornithologist at the University of Cape Town in South Africa, and coauthor of the study. He explains that the birds “haven’t evolved to have a response” to handle the attacks.

If a wound is small enough, the seabird may recover. But larger wounds force the determined bird to abandon its nest and head to sea for self-care. Jones says multiple mice can attack a bird in a given night, increasing the chances of the bird dying from the wounds.

Researchers believed that the house mouse, introduced to Gough by sealers in the early 19th century, at first had almost no impact on seabird populations. But in adapting to their new habitat, the mice grew larger. Now, says Jones, Gough Island mice are twice the size of the average house mouse. And they have a stronger bite to match.

On Gough Island, the researchers found the first direct signs of mice attacking seabird chicks in 2004. Anthony Caravaggi, an ecologist at the University of South Wales in England, who worked on that previous research but did not participate in the new study, says seabirds on Gough Island lose two million chicks to mouse attacks each year. A seabird pair usually raises just one chick per year, so this is a huge problem. It was as recent as 2015, after a successful program to rid the island of introduced cats, that the mouse attacks on chicks “went crazy on Marion,” says Ryan.

But mouse attacks on adults have an even bigger impact on the population, because an adult can raise many chicks throughout its lifetime.

Ryan says mice have been eating their way up the food web on the island, and are only resorting to eating birds as they become desperate. Attacks predominately occur in winter, when the mice’s usual foods, such as insects, have been depleted. The species most susceptible to mouse attacks nest on the ground and breed in winter. Jones notes that smaller, burrow-nesting adults may also be affected, but it is harder to monitor those species. 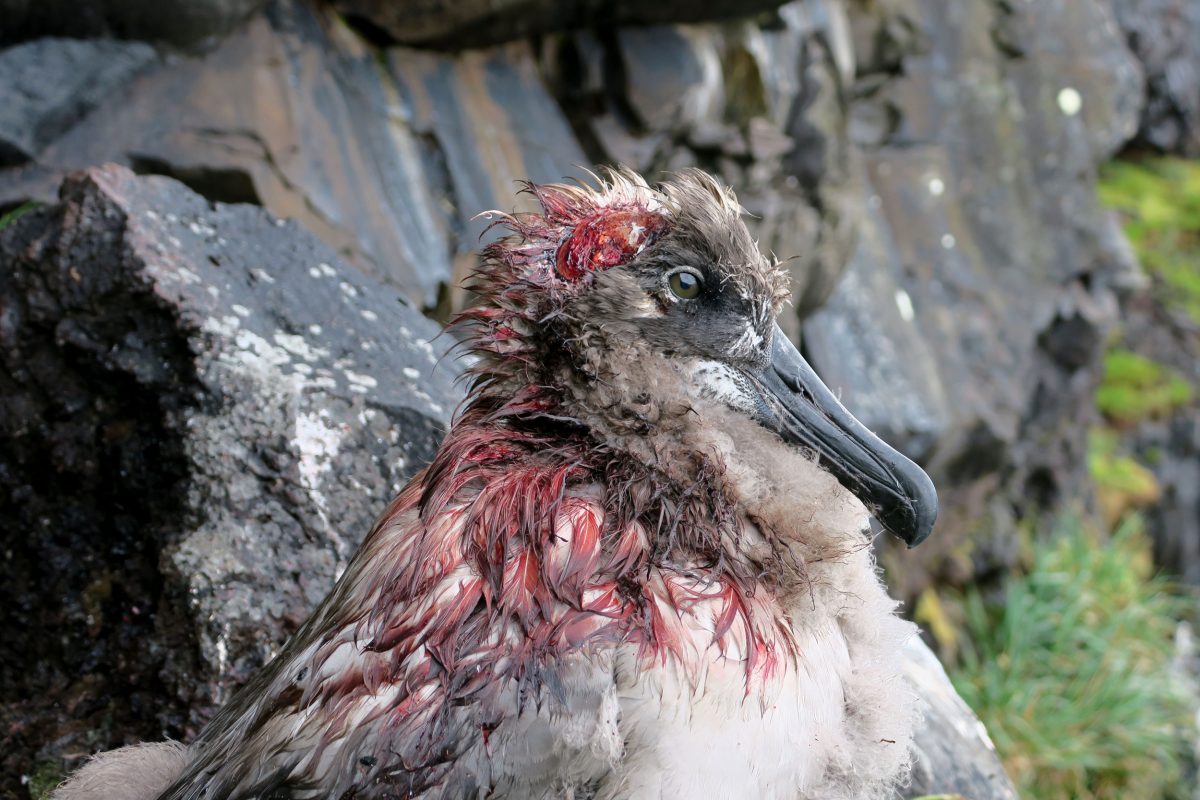 Albatrosses are big birds, with wingspans up to two meters. Yet their huge size does not seem to save them from the vicious attacks of hungry house mice. Photo by Peter Ryan

Jones says the mouse attacks often happen in clusters, which suggests cultural transmission of the behavior. And the fact that petrels nesting near the wounded northern giant petrel on Marion Island raised fewer chicks supports this idea. It’s likely that the neighboring birds were also attacked by mice, forcing them to abandon their nests.

How did the mice learn to hunt such gigantic prey? “Several hundred thousand mice are getting desperate to eat, and it seems like a couple of mice figure it out independently,” Ryan says. From there, the behavior spread through the population.

André Raine, coordinator for the Kaua‘i Endangered Seabird Recovery Project, which monitors endangered seabirds in Kaua‘i, Hawai‘i, says that invasive rats and feral cats are usually the main threats to seabirds. Attacks by mice are exceedingly rare, though there are other documented cases, such as when house mice on Midway Atoll in the Hawai‘ian archipelago attacked and killed adult albatrosses in 2015. According to Ryan, mouse attacks only occur when mice are the only introduced predators on an island.

Researchers warn that some of these seabird species, such as the Tristan albatross, will go extinct if the invasive mice are not stopped. Fortunately, in 2020 and 2021, operations to rid the islands of rodents, which will see the island bombarded with poisoned bait from helicopters, will provide new hope for these imperiled birds.*

Correction: This story was inadvertently published without its final paragraph.