A new tracking effort in the Indian state of Karnataka has documented more than 40 stranded animals, including this sea turtle. The project is a massive contribution to a scant record. Photo by Shantanu Kalambi

Shantanu Kalambi*, a 32-year-old marine biologist and veterinarian, was working at a marine animal rescue center in Kundapur, in the state of Karnataka in southwest India, when a fisherman called to report an unusual find—the fresh carcass of a small dolphin. Kalambi drove to Gangolli, a nearby town, where he found the body and identified it as a baby humpback dolphin, just a few days old.

“The stray dogs had gotten to the carcass and its stomach was opened up,” says Kalambi, who works for Reef Watch, a marine conservation organization headquartered in Mumbai, India.

The humpback dolphin washed up in February 2019, and in the months that followed, 42 more marine animals stranded along the Karnataka coastline were brought to Kalambi’s attention, including a juvenile blue whale, an adult Bryde’s whale, a spinner dolphin, and multiple humpback dolphins, green sea turtles, and olive ridley turtles. So far, he has been able to rescue one dolphin and 13 sea turtles. But even data on the dead is incredibly valuable: along the expansive 320-kilometer stretch of Karnataka’s coastline, only 50 stranding incidents had been recorded in the previous 128 years.

In Karnataka, as in the rest of India, little attention is paid to the marine megafauna that wash up on shore. Only large-scale strandings, such as when a dozen pilot whales washed ashore on the country’s eastern coast in 2016, get any attention. But keeping track of strandings is essential, says Mridula Srinivasan, a behavioral ecologist at the US National Oceanic and Atmospheric Administration. Regardless of the size of the event, Srinivasan says it’s important to track strandings—especially of larger marine mammals—because they tell us what is happening in the ocean. “Since they are the apex of the marine food chain, marine mammals and their plight are great indicators of the ocean’s health,” she says.

Srinivasan has been working on international stranding response issues for nearly a decade.** She says only long-term research can give clear answers as to why marine animals strand, but the main reasons include ocean noise, habitat degradation, lack of food, and pollution. Being caught in a fishing net as by-catch can also result in injury that leads to stranding. 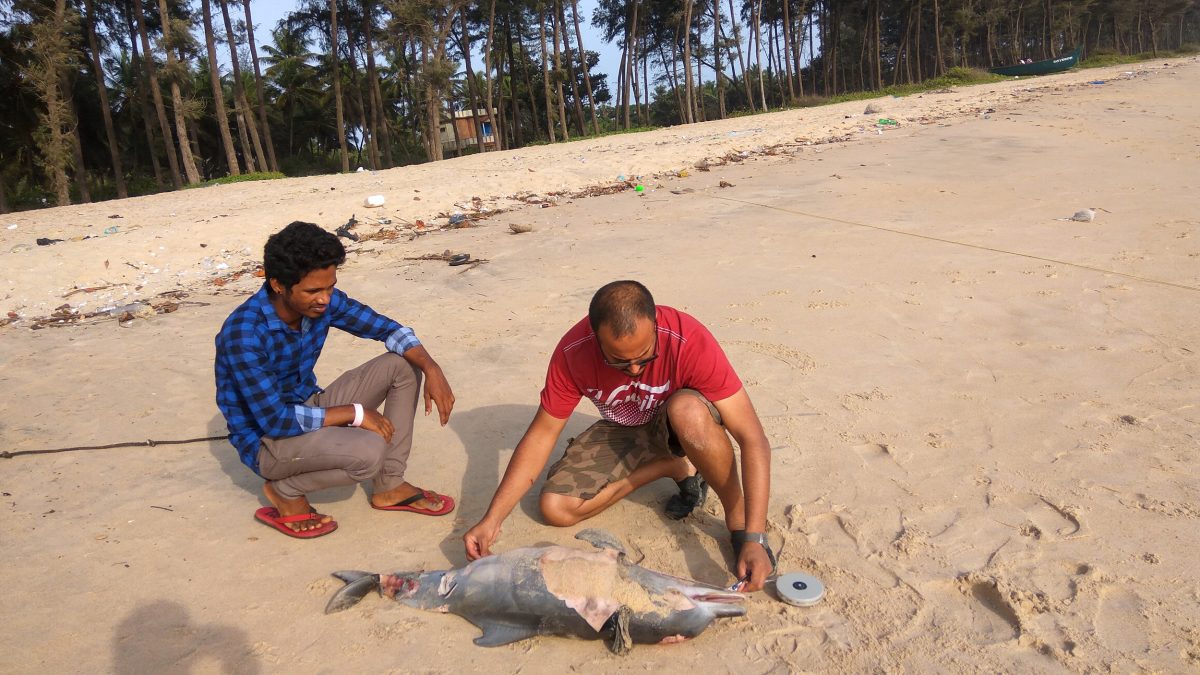 Shantanu Kalambi, the leader of the stranding tracking effort, says the project is drawing attention to and appreciation for the animals living in the region. Photo by Khyati Solanki

Kalambi’s project through Reef Watch is one of the first sustained efforts in India to record and rescue marine animals.*** Since he began working on this project, Kalambi has visited every beach in the state. “As of now, it’s mostly me driving up and down the coast, asking people to call me as soon as they see stranded animals,” he says.

“We have enlisted 48 volunteers, which include students, members of local political or religious groups, and, of course, people from the fishing communities who spread the word among their peers and keep an eye out for stranded animals,” he says. The project has funding from Reef Watch for three years.

So far, Kalambi says the response from locals and authorities has been quite positive. Before the project, he says people didn’t seem to even know there were dolphins off the coast, but now he’s receiving calls almost every day. The marine mammals, he says, are generating a certain sense of pride.

Earlier this month, the state forest department also signed a memorandum of understanding with Reef Watch promising that forest officials will assist in treating and rehabilitating injured marine animals, and where needed establishing the cause of death. They will also keep a database of stranding incidents along the state’s coastline. After Reef Watch’s funding for this project runs out, the state’s forest department is set to take over tracking marine animal strandings for the long-term.

Other Indian states, including Goa, Tamil Nadu, Maharashtra, and Odisha, have similar efforts to track strandings. Despite this, a much needed national framework for marine animal stranding response has been stuck in the pipeline for years, Kalambi says.

Having such a system might help tackle the problem. Most stranded dolphins, for example, have died by drowning Kalambi explains, adding that this may be linked to a recently relaxed regulation on fishing vessel speed. That regulation, he says, “might be making roadkill out of these animals. The only way we’ll know is if we put in the resources required to make sure every mammal stranded along the Indian coast is accounted for.”

**A previous version stated that Srinivasan has been researching strandings by marine megafauna for more than a decade. The story has been updated.

***This story originally stated that Shantanu Kalambi’s project was the first and most scientifically comprehensive effort of its kind in India. The story has been updated in numerous places to reflect the existence of other similar projects in the country.