At a summit on Arctic science and policy at the University of Alaska Fairbanks, Russian walrus hunters nod along as George Noongwook speaks of the changes he’s seen around his community of Savoonga, a town on Saint Lawrence Island, just 65 kilometers from Russia’s eastern coast.

A translator delivers the Yup’ik walrus hunter’s message to his Russian counterparts, who are familiar with the refrain.

“We’re seeing lots of walruses, we just can’t get to them,” says Noongwook. “In the past two or three years, we haven’t been able to harvest any walrus or bowhead [whales] because of the ice conditions. Pretty much, we have to go farther out, and that can get really dangerous in small open skiffs. If you go [300 kilometers], you’re going to be in trouble. The weather can pick up really fast.”

Tensions between Russia and the United States may be riding high (fueled by conflicts in Crimea and Syria, and other factors), but in the sparsely populated North Pacific, indigenous communities are working together to tackle shared ecological challenges. Thousands of kilometers from Moscow and Washington, it’s people like Noongwook who, gathered together for the weeklong Arctic Science Summit, are redefining Russia-US relations.

The indigenous populations of Alaska and Russia’s Far East share cultural, family, and kinship ties across a modern maritime border. As the Iron Curtain descended in Europe during the Cold War, the so-called Ice Curtain also divided indigenous Yup’ik, Iñupiaq, and Unangax communities. For decades, families remained split, and cultural ties faded until the late 1980s, when formal contact resumed.

Today, the communities have the opportunity to meet to exchange information and share ideas on how to address the threats to their shared resources—most recently, walrus “haulouts”. 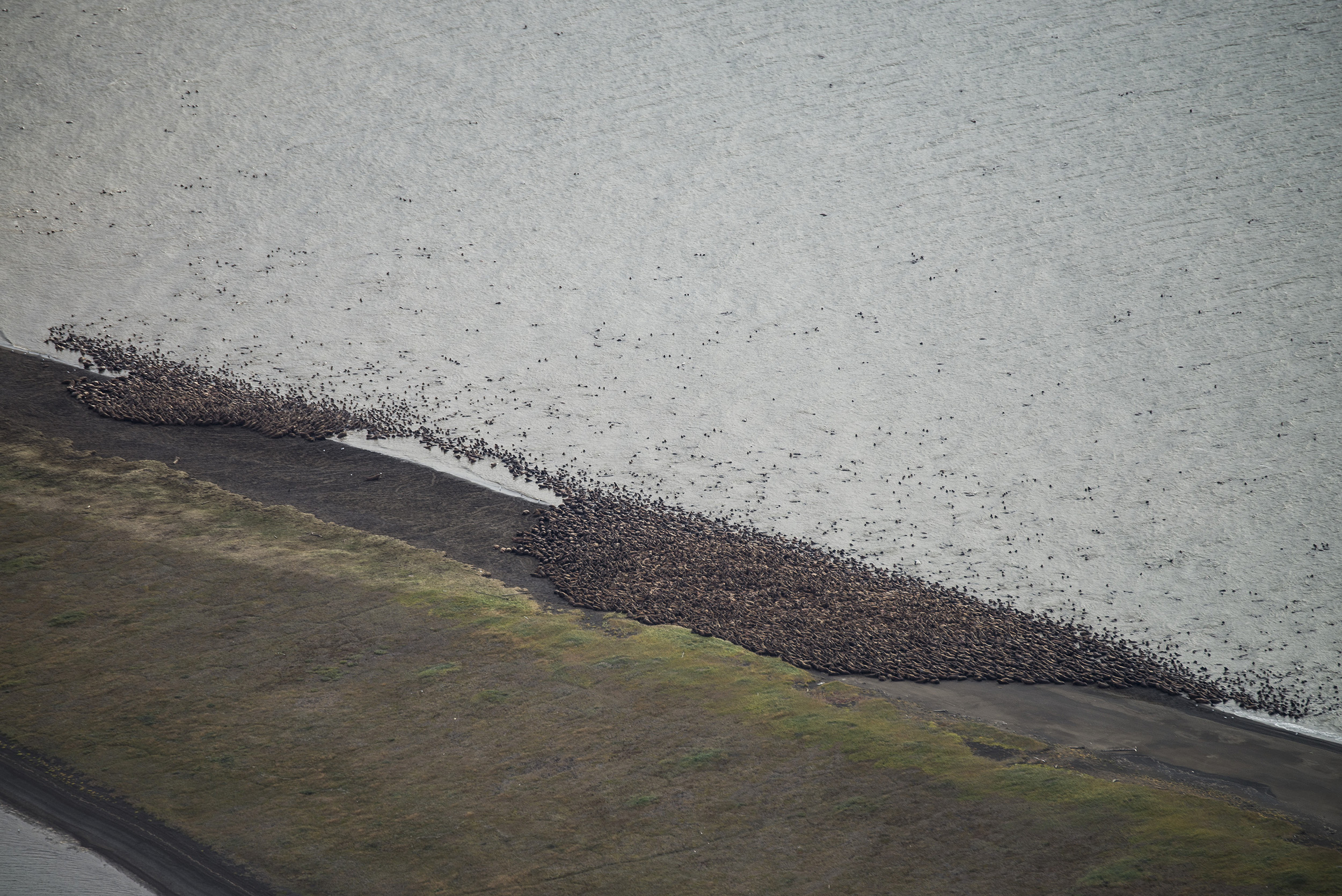 In August 2015, thousands of walruses haul out on the beach in northwestern Alaska. Photo by Gary Braasch/Corbis

Warming temperatures in the Arctic are causing sea ice to recede. Without ice to rest on, Pacific walruses have been forming haulouts—crowding onto beaches by the thousands. So many walruses in such close quarters can lead to stampedes, which can cause the animals to crush their own young. It’s a strange, troubling sight for the indigenous communities that have survived on seasonal hunts for centuries.

And every year, the haulouts seem to grow, hunter James Tazruk from Point Lay, Alaska, tells attendees of a session on walrus management in the Alaskan and Russian Arctic. “Before, it was, like, 5,000, and now it’s like 25,000. And I think next year it’s going to be even more.”

Perhaps counterintuitively, the haulouts are actually making hunting more difficult. The American and Russian hunters shared ideas on how to limit human activity near the haulouts to prevent stampedes, including pushing for no-fly zones near walrus habitat.

With receding sea ice the root of the haulout problem, most of the group’s exchanges were ideas on how villages can adapt. A member of the Russian hunter delegation told the group that, like villages in Alaska, Russian communities are often left without food when the walruses concentrate themselves in haulouts rather than spreading out along the entire coastline. Many communities in both Alaska and Russia depend on hunting for survival, as the cost of shipping keeps food prices high.

Anatoly Kochnev, a biologist at the Russian Academy of Sciences and one of that country’s foremost Arctic scientists, says haulouts in Russia used to happen just once every three or four years. Now, both the frequency and size of haulouts are increasing. In Alaska, most of the haulouts are happening along the state’s northwest coast.

Kochnev says that the US and Russian governments could do more to help, pointing to the countries’ existing partnership on polar bear conservation as a model.

In 2000, representatives from the United States, Russia, and indigenous communities in both countries signed an agreement that created the US-Russia Polar Bear Commission, which coordinates the management of polar bear habitat split between the two countries.

“I know it would be very effective and useful,” Kochnev says, “for the Pacific walrus to have the same kind of agreement on the government level.”

He says the two governments should formalize a relationship that echoes the tradition of cooperation of the region’s indigenous populations.

Ambassador David Balton, chair of the senior Arctic officials of the Arctic Council agrees. “It’s no secret that the United States and Russia have significant conflicts on other parts of the world and other issues,” he says. But indigenous peoples’ relations are largely independent of those conflicts. “In a sense, they can help us lead, and keep the glue in place.”