A bubble breaks the ocean surface following the firing of a seismic air gun in 1981. Photo by USGS

Geophysicist Stephen Chelminski can remember when mapping the ocean floor was a dangerous, even life-threatening, pursuit. In the late 1950s, he worked on a research vessel run by the Lamont Geological Observatory, where the crew tossed boxes of live dynamite off the stern of the ship. The dynamite would explode about a hundred meters behind the ship, sending out shock waves that traveled down to the seabed and back again, carrying information that scientists used to locate buried oil deposits.

“It was expensive and people were getting killed,” says Chelminski, now 83, from his office in New Hampshire where he still works as a consultant. “Entire ships were disappearing out there.”

Not long after his experience at sea, Chelminski began developing the surveying technology that would ultimately replace explosives: the seismic air gun. It would become his most well-known, and controversial, invention. Resembling a meter-long missile shell, the air gun can be discharged every eight to ten seconds, releasing a blast of energy capable of penetrating tens, or even hundreds, of kilometers into the sea bed. Compared to throwing dynamite overboard, it was cheaper, faster, and produced far better data. 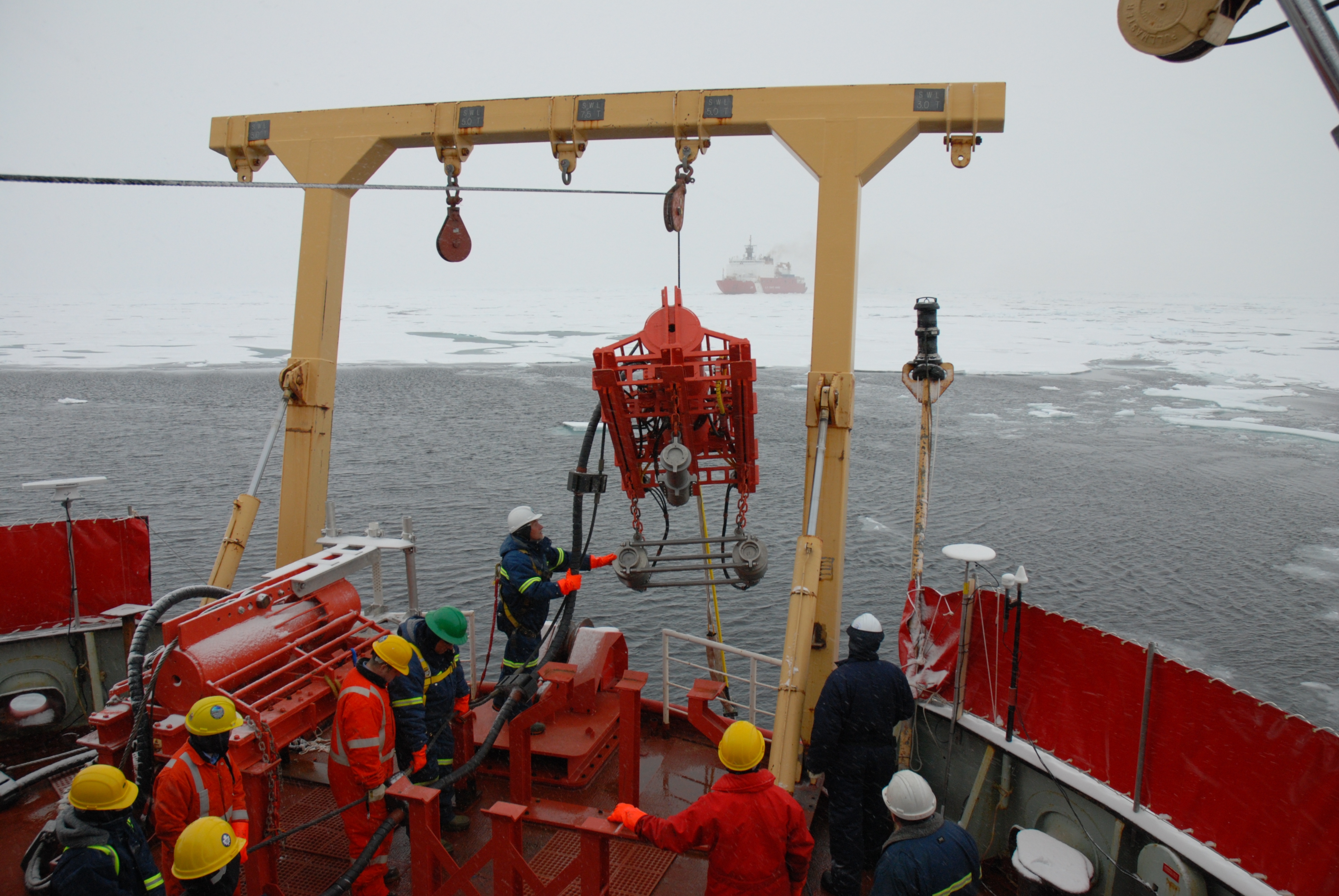 A sled carrying three seismic air guns is lowered into the Arctic Ocean from the CCGS Louis S. St-Laurent. Photo by Debbie Hutchinson/USGS

Today, air guns are standard equipment for seismic mapping—and their cannon-like noise is nearly ubiquitous. Towed behind ships in arrays of a dozen or more, the explosion from a single gun can be as loud as 250 decibels—not much quieter, really, than the dynamite. Surveys can last for weeks or even months. A recent study done along the Mid-Atlantic Ridge found that, over a decade of monitoring, air guns were the dominant noise in the ocean, and could be heard as far as 4,000 kilometers from their source. The constant banging has been shown to mask whales’ vocalizations, cause them to divert from migratory routes, and even to avoid eating or mating.

“They’re the second largest source of noise energy in the ocean today [after explosions for military testing], so they’re obviously a big concern” says Lindy Weilgart, a scientist at Dalhousie University who has studied ocean noise for almost two decades. The noise is affecting a huge range of species, she says—everything from turbot to turtles to giant squid.

The impacts worry Chelminksi, too. For the past 30 years, he’s volunteered with the non-profit Cetacean Society International which, among other initiatives, advocates against ocean noise. The air gun was an improvement over what was used before, he says, “but it’s apparent now that we need to do better.”

To that end, Chelminksi, who has more than 50 patents to his name, is working on a new technology—a quieter version of the air gun that he hopes will render it obsolete. Known as marine vibroseis, the technology uses a diaphragm-like device to release the same amount of energy as an air gun but spread over a longer wavelength—the result is a deep hum, rather than a crash. 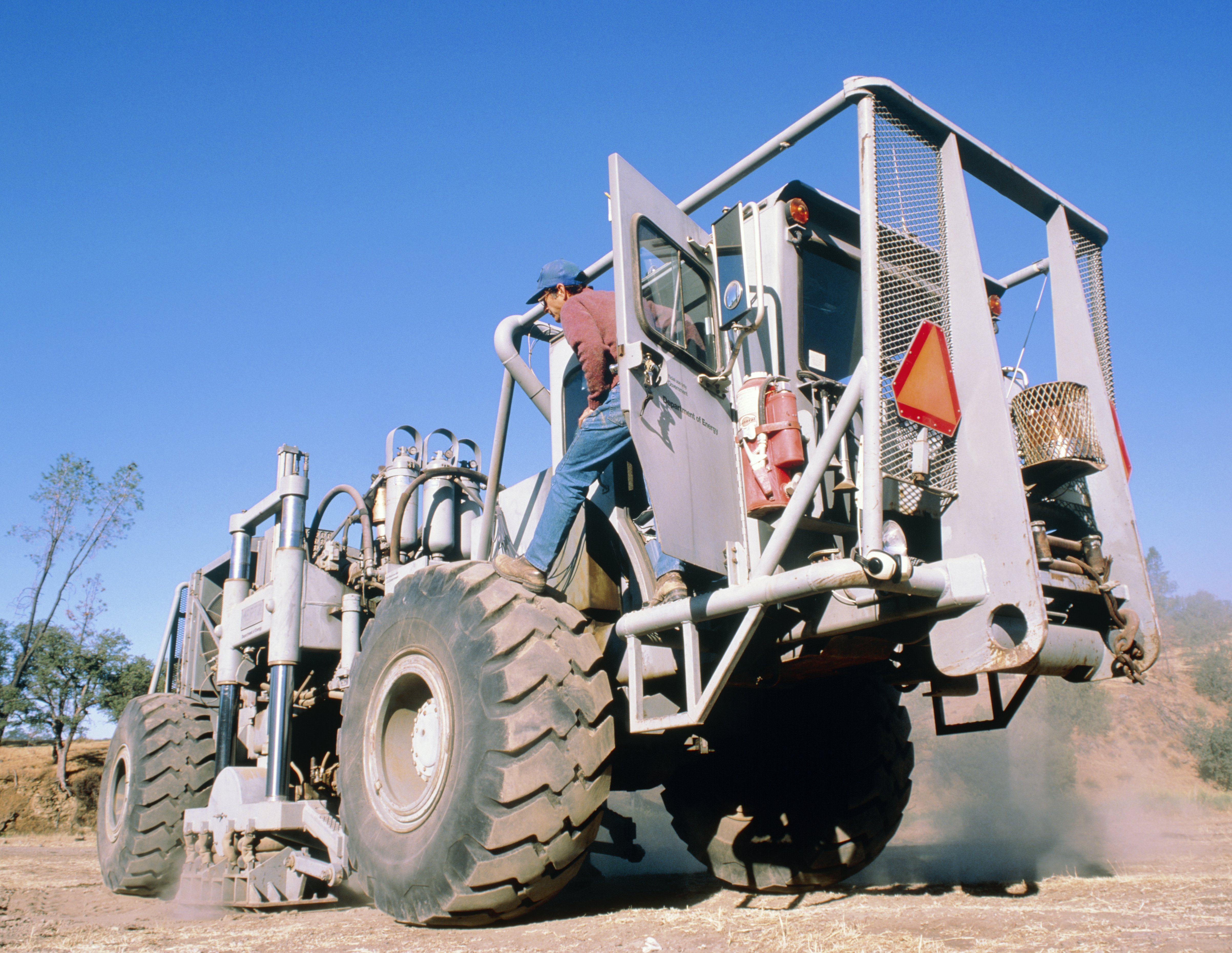 Vibroseis is a technology for producing seismic waves that has long been used on land. The problem now is to translate the approach for use in the ocean. Here, a vibroseis truck operates during an experiment in 1990. Photo by Science Photo Library/Corbis

The idea of using low-frequency waves for seismic mapping has been around since the 1950s and it’s been used on land for decades. Chelminski, along with a handful of other developers, is now trying to advance the concept for underwater use.

“The noise level is much, much less,” he says. “There’s no doubt that it will be better for marine life.” But, he adds, the technology is still unproven for seabed mapping.

Dalhousie’s Weilgart recently did an ecological assessment of marine vibroseis, using modeled noise data. She sees a lot of potential. “It’s a controllable sound, and that’s the big difference,” she says. A lot of the explosive noise from an air gun—everything above about 100 hertz—is wasted energy, as it’s not usable for mapping. Marine vibroseis emits energy only in lower frequencies that produce reliable geophysical data, which Weilgart says also tend to have less impact on marine life.

So why isn’t marine vibroseis being used already? Well, there’s not enough evidence yet that it works. And the effects on marine life need further study. But Weilgart suggests that if ocean noise were better regulated, it would speed up the development and testing of concepts like marine vibroseis and force the industry to invest in new equipment. As it stands, most seismic surveys require an environmental assessment but there are no clear rules around noise limits.

“The [oil and gas] industry is slow to change,” says Chelminski. He expects it could still be a few years before a quieter technology is being used. “But certainly, I’ll be happy when it happens.”