Very few animals have shown experimental evidence of self-awareness. The tiny cleaner wrasse is, apparently, one of them. Photo by Georgette Douwma/Minden Pictures

In the animal kingdom, self-awareness is very rare. Until recently, research showed that only humans and a few other primates were capable of recognizing themselves in the mirror. But new studies are challenging that. The latest suggests that even a small fish, despite its tiny brain, may share this special ability.

The cleaner wrasse got its name because it eats parasites and dead skin off other fish. The diminutive reef dweller is known to be highly social and relatively intelligent—but is it also self-aware?

To find out, a team of researchers recently put eight cleaner wrasses to the mark test, or mirror self-recognition test—a trial of visual self-recognition. The test involves placing a mark on the subject and then exposing it to its reflection in a mirror. How the animal responds to its reflection and the strange marks on its body reveals whether or not it recognizes itself. Most humans are able to discern that they are looking at their own reflection and that they have been marked, with a small daub of paint on the forehead for example, starting at around 18 months of age.

The research team, led by Masanori Kohda, a biologist at Osaka City University in Japan, put mirrors into the tanks individually housing 10 wild-caught cleaner wrasses and then tracked how they reacted to their reflections. At this stage, most of the fish exhibited unusual behavior when interacting with their reflections, such as dashing quickly in front of the mirror. The researchers say this suggests the fish were beginning to learn that they were not looking at another individual but at themselves.

Then, colored rubber marks were applied under the skin of eight of the 10 fish by injection, a common way of tagging fish in scientific experiments. Now when the fish saw themselves and the colored spots in a mirror, they seemed to try to remove the marks by rubbing their bodies against surfaces in the tanks. To ensure the fish were actually seeing the marks in the mirror, rather than spotting them by chance on their bodies, the test included putting marks in places that were only visible to the fish in the mirror, such as on their throats. A cleaner wrasse scraping its throat is a behavior the researchers had never seen before.

The experiments showed that the wrasses did not scrape their throats when the researchers put them in front of a mirror with an invisible mark instead of a colored one, nor did they exhibit this behavior when marked with a colored spot with no mirror in sight. Throat scraping only took place when the fish could see the mark in the mirror.

Kohda says the first time he saw a wrasse scraping its throat he was “very, very surprised … and very, very happy.”

Of the four fish with marks placed on their throats, three showed signs of self-recognition.

The scientific paper detailing the findings has not yet been peer reviewed, but the research is already attracting the attention of other scientists.

Gordon Gallup, the State University of New York evolutionary psychologist who invented the mirror self-recognition test, is not convinced the research shows the fish are self-aware.

“There are only three species for which we have compelling, rigorous, experimental, reproducible evidence for mirror self-recognition,” Gallup says. “And those species are chimpanzees, orangutans, and humans.”

Gallup points to the fact that the marks used on the cleaner wrasses were brown and intentionally designed to look like ectoparasites. This choice may have distorted the significance of the test, he argues, because the wrasses have an “evolutionary, hardwired preoccupation” with such blemishes. As an alternative explanation, Gallup suggests that perhaps the wrasses were simply motioning to what they thought was another fish, encouraging it to remove the parasite. 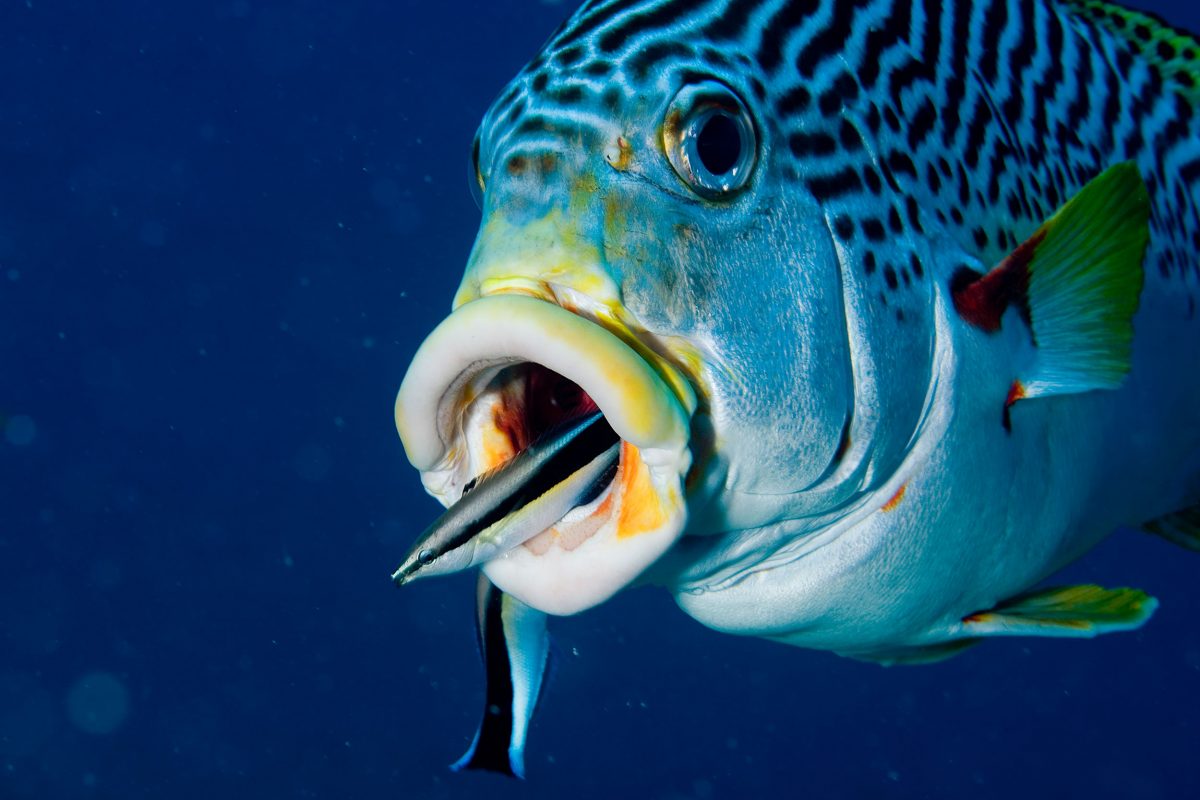 Cleaner wrasses have an evolved predilection for small brown ectoparasites, so perhaps it’s no surprise a small brown spot would catch their eye. Evolutionary psychologist Gordon Gallup thinks the choice to use a brown mark in the mirror test might have biased the study. Photo by Pascal Kobeh/Minden Pictures

“There is nothing in this paper that demonstrates cleaner wrasse are capable of realizing that their behavior is the source of the behavior being depicted in a mirror,” Gallup says. “In contrast to chimpanzees, which can recognize themselves in mirrors, I’m betting that if the cleaner wrasse had been marked with easily detectable, unfamiliar marks—but marks that did not resemble ectoparasites—none of the results reported in this paper would have occurred.”

But Redouan Bshary, who studies cleaner wrasse cognition at the University of Neuchâtel in Switzerland, says the new work was very thorough. He praises how the researchers stuck to their experiment for weeks, monitoring the fish for much longer than previous similar experiments. This allowed the scientists to carefully document the changes in behavior as the wrasses adjusted to the presence of the mirrors and responded to the marks.

By email, Bshary says he has never seen a cleaner wrasse scratching its throat. “These are new behaviors that are apparently tightly linked to the mirror.”

Now, says Bshary, “the main challenge is to primatologists and anthropologists to reassess what the mirror test might or might not show.”

Culum Brown, a fish behavioral ecologist at Macquarie University in Australia, says he was impressed with the study and sees an easy way to address Gallup’s critiques: “Just use a different marking technique.”

Brown says some of the fish behaviors recorded by the scientists—such as posturing in front of the mirror in ways that would reveal the marks in their reflection—suggest that the fish are in fact knowingly positioning their bodies with the mirror’s help. Brown places this work in the growing body of evidence that fish might be more clever than we often think.

Gallup lauds efforts to prove self-recognition in fish, but he insists that if cleaner wrasses were indeed found to be self-aware, it would be truly extraordinary. “I’d be absolutely stunned,” he says.