Scientists think gigantic crinoids would cling to logs with anchor-like stems, creating a floating raft that likely supported a host of other species and enabled their long-distance transport across Jurassic seas. Illustration by Richard Bizley/Science Photo Library

Today’s oceans are jammed with plastic, which not only pollutes the water and poisons its inhabitants but also carries some animals to distant destinations. As researchers rush to discern the imminent repercussions of these virtually indestructible plastic rafts on global ecosystems, others are turning to the past to explore whether this buoyant lifestyle is actually new. The subject of their study? A giant of the Jurassic era: the crinoid.

Crinoids look more like plants than animals, but they are invertebrates related to sea stars and sea urchins. With floweresque crowns atop stems reaching 26 meters in length, crinoids living in the Jurassic were one of the world’s largest-known invertebrates. In warm prehistoric seas, a subset of these behemoths used their anchor-like stems to grip floating logs and surf in colonies hundreds strong. And with them, life may have spread far and wide.

For marine and terrestrial organisms alike, rafting may be a key dispersal mechanism. In fact, rafting may have been one way islands like New Zealand were initially colonized by some organisms. But drifting crinoid communities represent the earliest example of rafters in the fossil record, says Aaron Hunter, an evolutionary paleoecologist at the University of Cambridge in England.

According to Hunter’s newest statistical analyses, logs carrying rafting crinoids could float on even the most hostile oceans for a decade or more. Rafting crinoids and their driftwood vessels, Hunter says, “would have created a little island of activity” in an otherwise nutrient-poor ocean.

Though the rugged mussels that accompanied the crinoids remain as relics of this early mode of marine transport, no other passengers were preserved. Hunter speculates that crinoid rafts could have ferried additional stowaways including plants, bryozoans, and crustaceans. Animals such as fish might have also trailed in their wake, feasting on the travelers.

Michael Simms, a paleontologist at National Museums NI in Northern Ireland who was not involved in Hunter’s research, theorizes that these buoyed communities could have traveled thousands of kilometers, provided they could make it to the open ocean without getting caught in currents or sinking. They might have even traversed entire oceans, he speculates, although the exact routes they took can’t be extrapolated from the fossil record.

Although this rafting lifestyle was once the subject of intense debate among crinoid researchers, most now agree that at least two crinoid lineages spent tens of millions of years rafting. Scientists initially estimated that crinoids floated for a few years. More recently, Hunter, Simms, and others have extended these estimates to at least a decade, maybe two. Depending on factors like ocean currents, rafting longer could mean rafting farther for the crinoids and their passengers.

Simms based his calculations on observations of modern driftwood to surmise how long ancient logs could have stayed afloat, even encrusted by crinoids. Hunter, meanwhile, is using statistical approaches to analyze crinoid fossils and reverse-engineer their time of death. These methods, he hopes, will add credence to the rafting hypothesis and derive more accurate estimates of floatation duration.

Rafting crinoids flourished until roughly 180 million years ago, when, some scientists think, the appearance of wood-boring organisms like shipworms drastically curtailed their drifting ways. Once their vessels collapsed, the crinoids would plummet to the bottom of the ocean, in many cases becoming frozen in time by the oxygen-starved seabed. 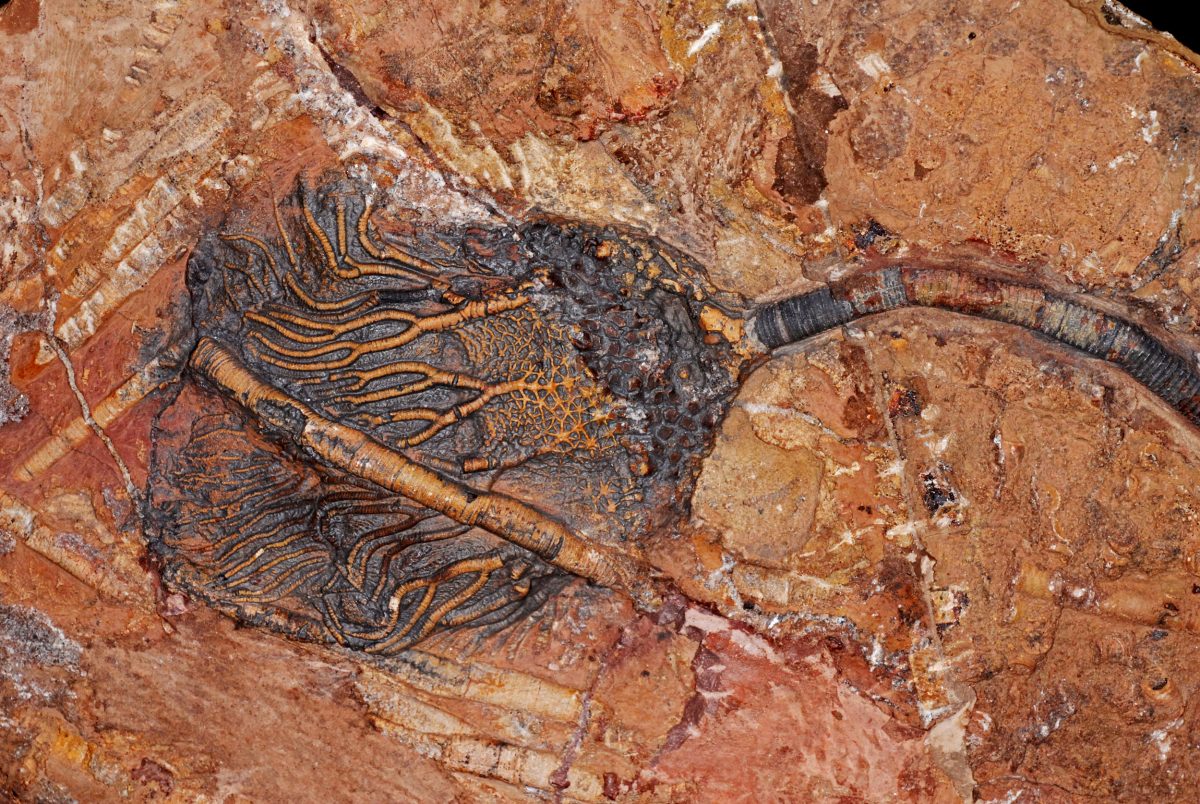 By analyzing fossilized crinoids, scientists are trying to determine how long and far they could have rafted. Some fossils even contain mussels, suggesting the crinoids supported a small ecosystem. Photo by Scott Camazine/Alamy Stock Photo

Modern crinoids no longer raft attached to logs—instead, some species get around by crawling along the seafloor or swimming with feathered arms. But that hasn’t stopped the rafting process for other species. Now, creatures looking to hitch a ride enjoy a fleet of vessels even more durable than Jurassic driftwood: plastic.

“Every day we throw plastic in the ocean, so there is a continuous supply of tickets for these travelers,” says Martin Thiel, a marine biologist at the Catholic University of the North in Chile.

In 2015, Thiel and his colleagues reported that nearly 400 different types of organisms have been found rafting on floating litter, a figure that has only grown. Compared to Jurassic logs, most plastics are highly resistant to decay. Forget decades, these plastic rafts could theoretically drift for centuries.

Figures like these raise concerns about the threat of invasive species, which now have a new way to surpass their natural distributions. According to Lars Gutow, an ecologist at the Alfred Wegener Institute in Germany, invaders riding on plastic rafts are a major threat to biodiversity that could lead to the homogenization of species on a global scale.

But for Hunter and Simms, Jurassic crinoids are a good reminder that rafting is not new. While some in the scientific community were shaken by recent reports of organisms rafting on plastic and other debris for upwards of five years after the 2011 Japanese tsunami, Hunter’s reaction was, “Wow, that’s too short.”

Just like the ancient crinoids, he says, these tsunami-born travelers could have floated for decades but ultimately bumped into land. Many of these travelers, he thinks, may still be out there.

What makes today’s plastic rafters different from Jurassic crinoids, though, is that no wood-boring organism will expedite their demise. The durability of plastic means that the full impact of these impervious rafting communities on native species has yet to be seen.

As Simms says, it’s a great time to be a rafting organism, “but a terrible time to be almost anything else.”