Killer whales, like many other species, are expanding their ranges in the warming, increasingly ice-free Arctic. But here, new threats await. Photo by Crystal Speedie

In February 2016, hunters from Sanikiluaq, Nunavut spotted two killer whales prowling around a group of beluga whales in southeast Hudson Bay. It was an unusual sight for the time of year—killer whales don’t usually show up there until the summer, and are rare even then. In June, residents of the Inuit community spotted two other killer whales. By July, all four killer whales were dead. Trapped in the bay by thick sea ice, they starved to death.

Hudson Bay is a geographically complex inland sea with just two entrances—or exits—both at the north. Most years, the bay freezes over completely from mid-November until mid-July. Killer whales are typically found in the open ocean, but in recent years they have been venturing into the bay during the ice-free summer in search of prey such as belugas or narwhals. As the ice forms across the bay’s entrances in the fall, the only escape for the whales is to swim north. But this goes against their normal instincts, says Steve Ferguson, an evolutionary ecologist from the University of Manitoba. In the open ocean, killer whales would head south, where there is typically less ice. The result is that the killer whales find themselves trapped long into the winter, and, soon after, begin to starve.

Around the world, and especially in the Arctic, changing environmental conditions are offering up new habitats to animals willing to venture into the unknown. These killer whales may have been locals from the northeastern Canadian Arctic that were exploring Hudson Bay for the first time, or newcomers that moved into the region from afar—scientists aren’t sure. Either way, the lack of sea ice in the bay—which is setting in later, and over a smaller area, than in previous decades—was the fake floor hiding a deadly trap.

In fact, these four dead whales are just the latest in a rising tally. In 2011, a killer whale was found frozen in ice in the north of the bay. In 2013, an estimated 17 killer whales were seen swimming in the frigid water, their movements tightly constrained by the drifting pack ice. Most, if not all, of these whales are thought to have died. As far as scientists know, in the Arctic, more killer whales have died in the ice over the past decade than have suffered such a fate over the past century. 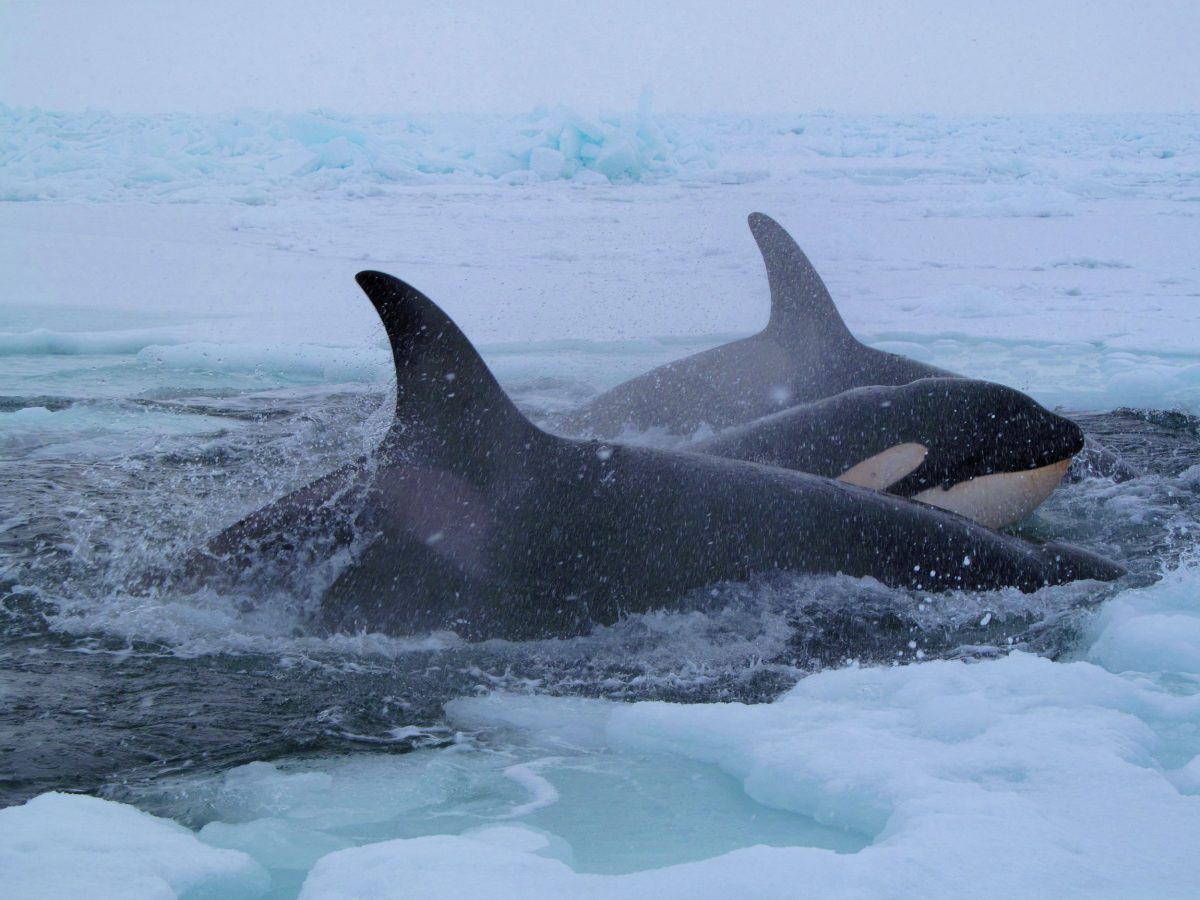 In 2013, roughly 17 killer whales, including these three, became trapped in Hudson Bay. They were photographed near Inukjuak, Quebec, on the eastern side of the bay. Thick sea ice prevented them from moving freely. Photo by Raphaël Goulet

To find out exactly how the four killer whales died in 2016, Cory Matthews, a marine ecologist with Fisheries and Oceans Canada, along with Ferguson and other colleagues, analyzed samples of skin, blubber, muscles, and teeth that Sanikiluaq residents shipped to their lab in Winnipeg, Manitoba. Evidence pointed toward starvation as the cause of death. Cell fluid had condensed in the blubber, and skeletal muscle fiber had wasted away. Higher levels of nitrogen isotopes in muscle compared to skin—an observation seen in other animals undergoing extreme nutritional stress—supported this hypothesis.

The team estimates the killer whales could have survived on fat reserves for around 50 days, so they must have found at least some food to have lasted as long as they did. But whether the belugas on which the killer whales were feeding managed to escape, or there simply weren’t enough to tide them over until the ice thawed, the killer whales eventually starved.

“Killer whales are super smart; they pass things on culturally,” says Matthews. Yet these killer whales are naively swimming into the warming bay. If none survives the winter freeze, the warning to stay away can’t be passed on. “If you wipe out an entire group it could take time, not just to recuperate their abundance but to gain the knowledge back,” Matthews says.

As animals—killer whales included—expand their ranges and lengthen their stays in the Arctic, ecologists are watching for the potential consequences. In western Alaska, for example, the fragile food chain topped by polar bears and human hunters is being intruded upon by this apex predator in the sea. But Matthews and his colleagues argue that killer whales dying trapped by ice may slow their expansion—and could be noticeably harming their numbers.

Paul Wassmann, a marine ecologist from the Arctic University of Norway, says that the killer whales venturing into the Arctic for the first time may be particularly at risk of getting lost in the ice as they’ve yet to learn how to tackle the new environment.

“This could be a pretty significant source of mortality for these whales,” Matthews says. He estimates that only around 70 killer whales live in the northeastern Canadian Arctic. Ferguson agrees that there could have already been a pretty big impact, as even just the four dead killer whales in 2016 is a proportionately high toll for that local population. “I’m curious how many sightings of killer whales we’ll see over the next few summers,” Matthews says.