Inside the harbor in Ny-Ålesund, a research town in Svalbard, researchers look down on the powerful lights of an autonomous underwater vehicle. Photo by Geir Johnsen (NTNU)

In the fall of 1819, William Edward Parry and his crew prepared to spend the winter in the Canadian Arctic. For this team of British explorers, the unforgiving cold and round-the-clock darkness were obstacles to be overcome in their search for the Northwest Passage. Looking out across the flat, treeless expanse of ice and fog, the barren landscape must have seemed wholly inhospitable. “It was a novelty to us,” he later wrote in the account of the expedition, “to see any living animal in this desolate spot.”

From Parry’s accounts, and those of other travelers, scientists built a picture of the polar night as a period of Arctic dormancy, an extended slumber in the endless twilight—when all but the hardiest of life either fled for warmer climes, or hunkered down to wait for the Sun to return. But now, researchers are discovering that the explorers had it all wrong.

A pair of new papers describing the latest discoveries reveals that the Arctic night is far from desolate: it’s alive with activity. It’s a time when microbes and animals feed, grow, and reproduce in the polar ocean, with special adaptations allowing them to thrive in the dark. 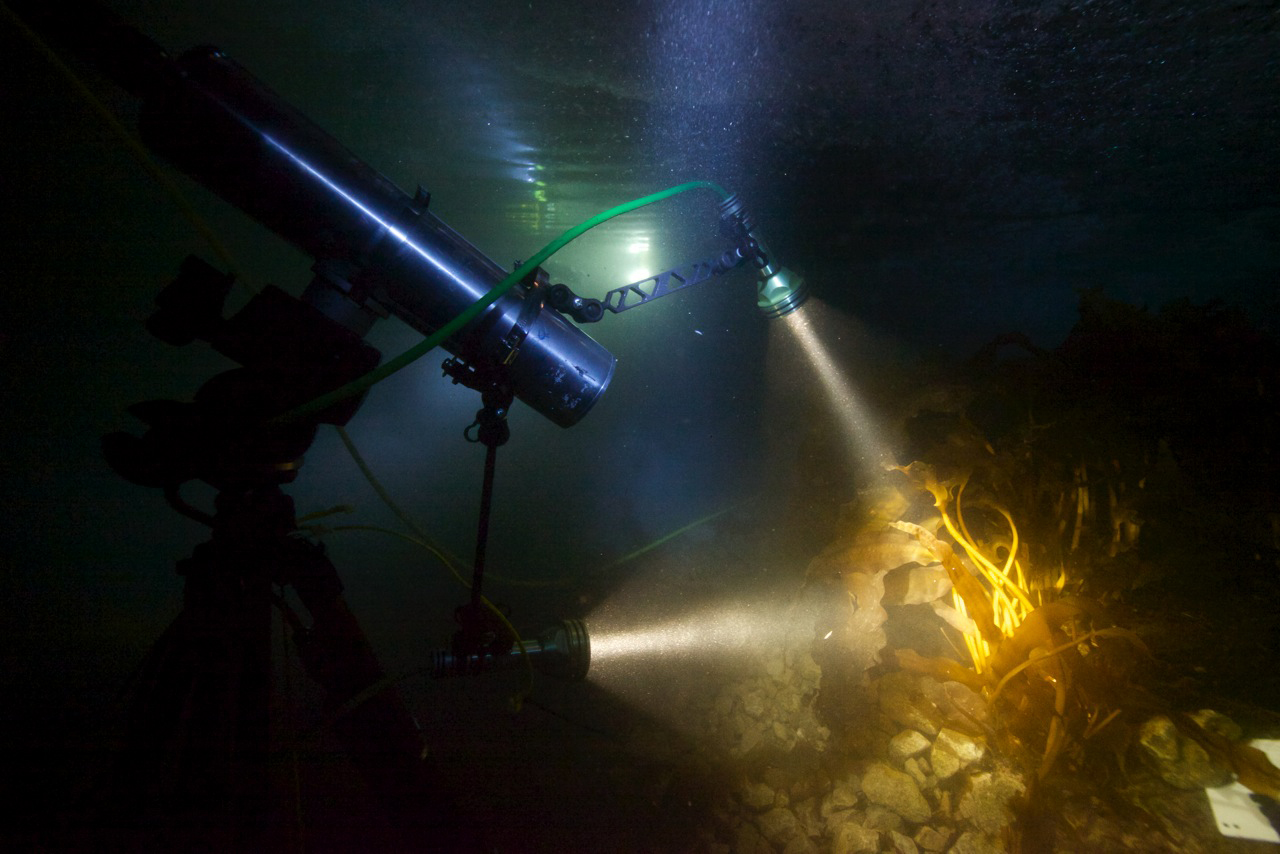 Many Arctic creatures have evolved to make use of light that is invisible to the human eye. Meanwhile, “an astonishing number” have developed bioluminescence, says Jørgen Berge, lead author of both new studies. Others live by moonlight, or by the soft red and green glow of the aurora borealis.

Berge, a marine biologist with UiT The Arctic University of Norway, is no stranger to life above the Arctic Circle. Berge has spent 13 years studying zooplankton in Svalbard, a group of mountainous, ice-covered islands far off the northern coast of Norway. Yet while cruising around a fjord in January 2012, he leaned over the side of his small boat, peered into the water, and saw something new.

“I saw a fantastic cosmos of blue-green light in the middle of the fjord,” Berge says. “That’s when I decided we needed to study the polar night.”

Berge and his colleagues have since discovered algae that grow without normal sunlight, and zooplankton that maintain their circadian cycles even without the Sun’s cues. And with these minuscule organisms forming the base of the food chain, larger organisms have adapted to prey on them.

Berge found healthy seabirds in winter with stomachs full of krill and Calanus glacialis, a fat-rich copepod that he calls the “avocado of the ocean.” How the birds located their prey in the dark remains a mystery, but he suspects that they spot the planktons’ faint bioluminescence. 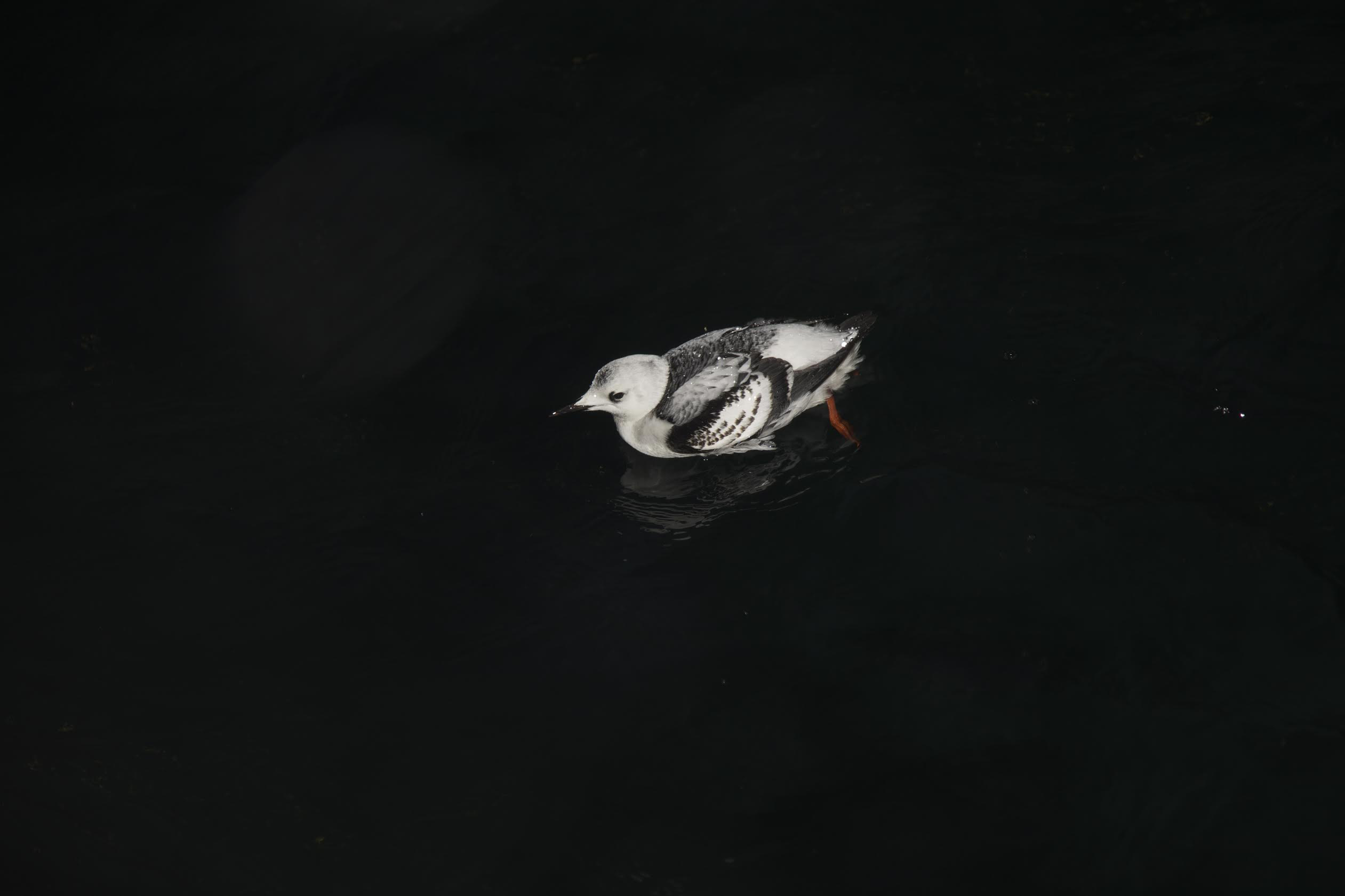 A black guillemot floats on the sea outside Ny-Ålesund, Svalbard. Photo by Geir Johnsen (NTNU)

Iceland scallops, meanwhile, can detect enough ambient light from the weak glow of the sun over the horizon to swim and feed on a summer-like schedule. “For me, seeing the bivalves grow through the polar night was the most surprising,” says biologist William G. Ambrose, Jr., a coauthor of the Current Biology study.

Life in the polar night is “far more active than we ever thought,” says Carin Ashjian, an oceanographer at Woods Hole Oceanographic Institute, who was not involved with the new papers. “This is a paradigm shift.”

Now, researchers are working to determine if the burgeoning life they see is common across the Arctic, or if it’s an abundance particular to Svalbard. Then, they’ll need to figure out the whys and hows. “It appears you can’t understand the system fully by just focusing on the period of time when the Sun is up,” Ambrose says wryly.

But the rapid onset of polar warming, driven by anthropogenic climate change, means that the time for discovery may be running out. “We need to first understand the processes currently occurring. We call this the baseline,” says Kim S. Last, who worked on both of the new papers. “Without a baseline we have no way of assessing change in the biological system.”

Like the old explorers, scientists still have much to learn about what goes on when the Sun goes down.

“We have lifted the curtain on the darkness,” Berge says, “and now we’re watching the active players on stage.”