Sea lice are common parasites that can infect wild and farmed salmon. Photo by Natalie Fobes/Corbis

Like their land-based colleagues, fish farmers have to deal with pests and parasites that attack their animals. And like famers on land, they are looking for natural ways to deal with the pests that minimize the use of chemical treatments.

For salmon farms on the east coast of Canada, that means finding a way to fight the sea lice that can plague their open-water net pens. The aquaculture industry is now experimenting with using “cleaner fish,” such as cunner fish and lumpfish, to help control lice numbers, similar to how land-based integrated pest management techniques use natural predators to control pests.

“Sea lice may be unique to salmon farms, but pest management is not unique to farming,” says Pamela Parker, executive director of the Atlantic Canada Fish Farmers Association. The aquaculture industry is developing integrated pest management techniques as a way to keep chemical and drug treatments to a minimum, she says.

Sea lice are common parasites that attach to a variety of wild fish, including salmon, and feed on their host’s skin, mucus, and blood. While a few lice on an adult salmon are not too much of a problem, large numbers of them—or small numbers on juvenile fish—can be harmful or even fatal. They may also help to spread infectious salmon anemia, a serious disease.

Sea lice are a particular problem for farmed salmon because the farms provide a concentration of hosts that are unable to escape the parasites. The lice don’t like fresh water, so wild salmon can shed their unwanted hangers-on when they swim into rivers to spawn. But wild juvenile salmon, which are more susceptible to the lice, can be at risk if they swim past infested pens on their way back out to sea. 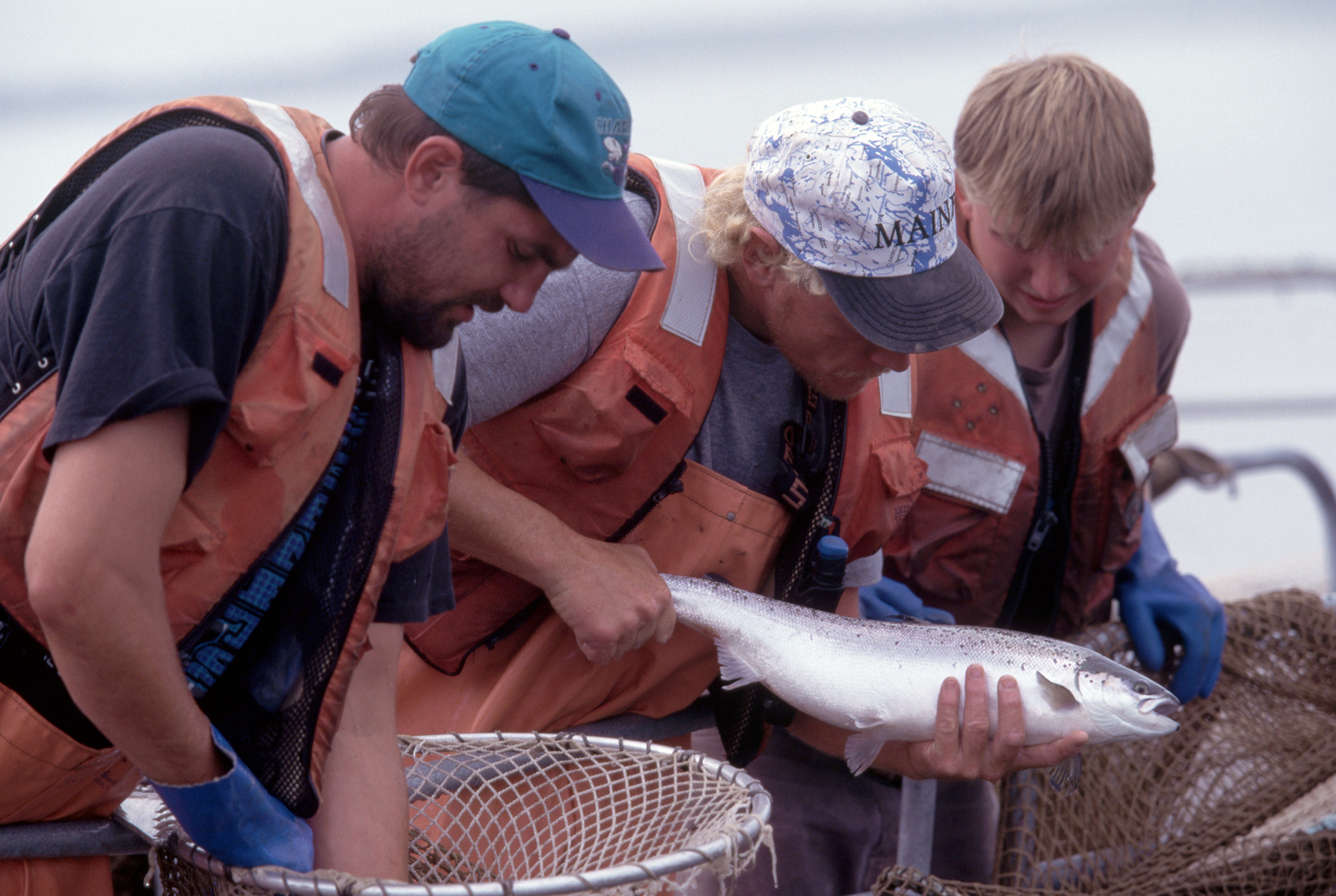 The aquaculture industry uses a variety of methods to try and control the lice population. The fish go into the water parasite-free and these first-year fish are separated from older fish that are more likely to have parasites. The farmers also leave areas fallow after the fish are harvested, to allow the parasites to die off or disperse. But they always show up again. “We’re never sure where they come from,” says Parker.

Farms also use more active control measures. Additives in fish food prevent lice from attaching, hydrogen peroxide baths remove any that do attach, and, in an emergency, organophosphate pesticides are administered.

But sometimes the problem can get so bad that the farmers take more drastic action. In 2013, Cooke Aquaculture, one of the biggest fish farming companies in North America, pled guilty to using Cypermethrin—a pesticide that is illegal to use in the ocean in Canada—to control sea lice at 15 sites in New Brunswick, and was fined CDN $500,000.

To increase the effectiveness of their other management systems, the industry is now experimenting with natural control methods. This includes adding cleaner fish such as lumpfish and cunners, which are native to the region, to the pens where it’s hoped they’ll eat the lice off of the salmon. “Cleaner fish are showing promise,” says Parker.

The Norwegian aquaculture industry has been using wrasse cleaner fish for about five years now, she adds, and the North American industry is learning from that experience, particularly in how to breed and care for their own cleaner fish. “You can’t just go out and capture wild lumpfish,” Parker says. “You need a breeding program and you need to protect the health of the cleaner fish.”

While anything that reduces the industry’s reliance on chemical treatments is to be encouraged, Inka Milewski, the scientific adviser for the Conservation Council of New Brunswick, thinks ramping up cleaner fish from small experiments to full-scale fish farms will be a challenge. “How many cunners will you be able to put into a pen without sacrificing salmon density?” she asks.

And introducing the cleaner fish could bring its own set of problems, she adds. Cunners, for example, have their own parasites such as Cryptocotyle lingua, a parasite that can cause the untreatable black spot disease in both fish. And since the cleaner fish in the pens are at a higher concentration than would be normal for the ecosystem, if they escape they could hurt local fish and crustacean populations as they prey on their eggs and larvae. “Sometimes the solution creates other problems,” says Milewski. The whole idea of employing cleaner fish needs to be reviewed at a broader level, she adds, rather than just simply investigating whether the cunners will pick off the lice.