Lionfish are native to the Indian Ocean, but spread to the Atlantic in the 1980s. They first arrived in Cozumel, Mexico, in 2009. Photo by Cultura RM/Alamy Stock Photo

Dive tourism is a pillar of the economy in Cozumel, an island off Mexico’s southern coast. But the reefs that keep this industry standing are being destroyed by invasive lionfish, which eat native fish and slowly but persistently strip the reefs of their vibrancy and diversity. Such sorely degraded reefs will hurt Cozumel’s tourism industry—to the tune of a 12 percent drop in tourists, or US $83-million annually, according to a recent report conducted by Mexico’s National Commission of Protected Areas. But controlling the lionfish is expensive. Hunting them one by one with harpoons is the best method, but there aren’t enough local resources to fund such a cull.

To make up the financial shortfall, some conservationists and scientists have suggested levying a fee on divers to help pay for reef protection. In a new paper, Luis Malpica Cruz, a marine scientist at Simon Fraser University in British Columbia, shows that implementing such a fee could involve some tough choices. He found that most tourists would be willing to pay a $5 fee, but were less likely to pay more. He also found that most tourists prefer healthy reefs with few lionfish. The takeaway of the study is that in the short term, such a fee could discourage divers from visiting Cozumel, hurting local businesses. But in the long run, raising money to fight the lionfish might save the reefs and, ultimately, keep dive tourism alive.

Even before Malpica Cruz published his study, officials from Cozumel Reefs National Park were considering charging a fee for reef conservation. Everyone who enters the park pays an entrance fee of about $1.75, but that money goes to the federal government, not the national park. The new fee would fund the park directly.

When asked about an additional fee for tourists, Guillermo Mendoza, the owner of Aldora Divers in Cozumel, groaned. He says the additional fee would drive customers away, and add another layer of bureaucracy to running a business. He says lionfish aren’t as big of a plague as they’re made out to be, adding that while he sometimes takes customers lionfish hunting, they rarely find them.

“There are 2,000 to 3,000 divers a day here during peak season,” Mendoza says. “You can forget about the lionfish. There may be one on the reef, but it doesn’t even last a week … before it’s dead.”

The local fishing cooperative supports the stance that lionfish are already under control. The co-op has been aggressively targeting lionfish since the invasion began in 2009. That year, co-op fishermen hauled in 700 to 800 kilograms of lionfish each month. In subsequent years, that dropped to less than 50 kilograms per month. 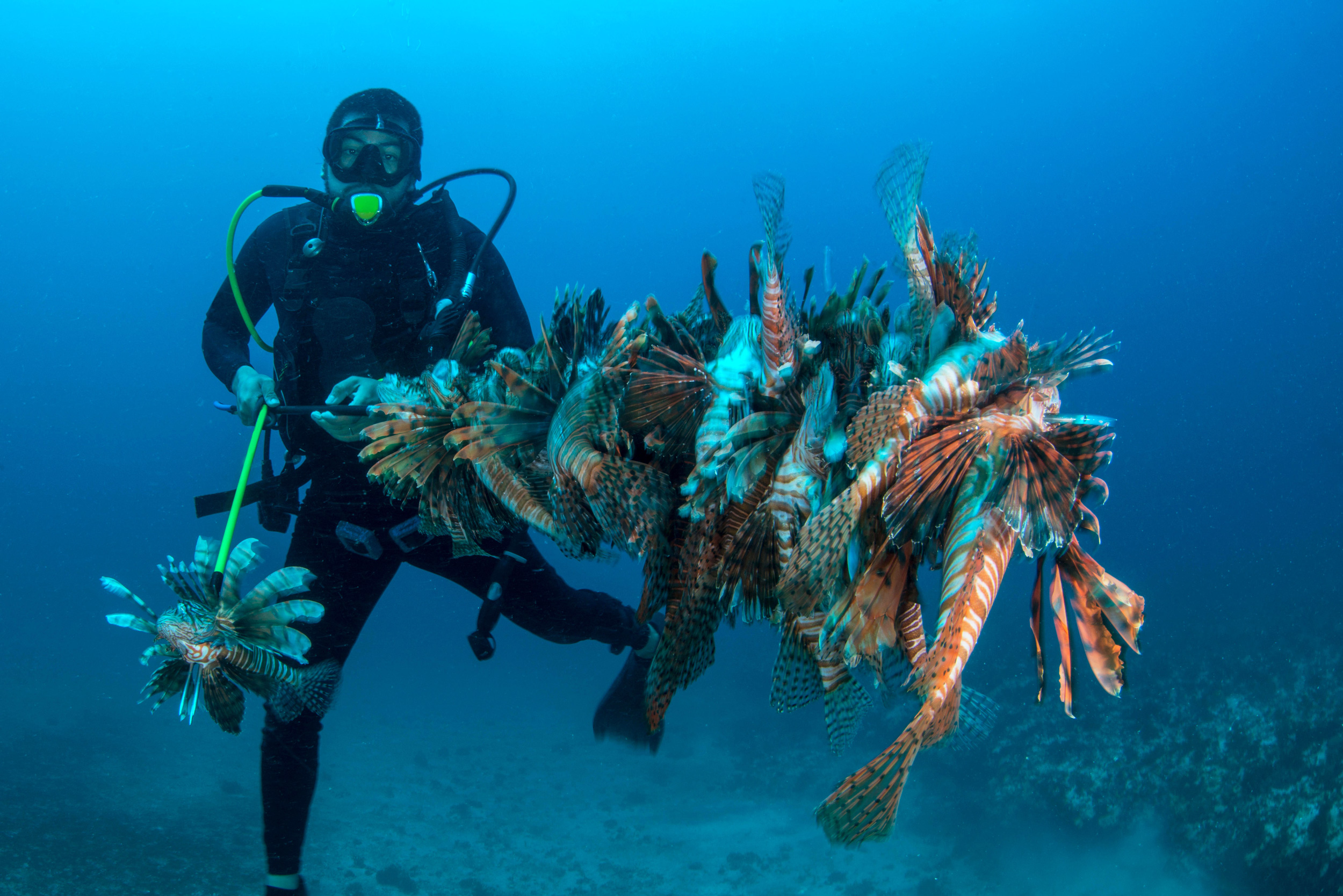 Alfonso Aguilar-Perera, a lionfish expert at the Autonomous University of Yucatán, Mérida, says hunting and eating the lionfish is only a temporary solution. The idea that parks would be able to control the fish is flawed, he says. Lionfish can live deep beneath the surface, avoiding fishermen’s harpoons.

He compared the problem to Mexico’s seemingly endless drug war. You can arrest the leader of a drug cartel, but there will always be someone else to take his place.

According to Aguilar-Perera, parks should implement a fee for divers, but they should use the funds to pay for educational programs on the destructive effects of lionfish since no amount of money can truly stop the invasive species. Cozumel’s only hope, he says, is if the island’s native predators develop a taste for lionfish.