Montserratian children splash in the waves on a Sunday afternoon in late January. Photo by Ryan Schuessler

Shary Barzey got snorkel gear for Christmas. She likes to look at the fishies—and the sea turtles, of course. And that’s about all you can get out of her, as can be expected from any shy nine-year-old. But the glint in her eye tells a different story: Shary Barzey is excited about the ocean.

For Veta Wade, the director of Fish ’N Fins, an ocean camp for Montserratian children, that’s good news. It’s a sign that her life’s work is beginning to pay off.

Wade, now 35, was born in Montserrat, but she used to take the ocean for granted. That is, until she was forced to leave it. Wade was just a teenager when the island was thrown into chaos. 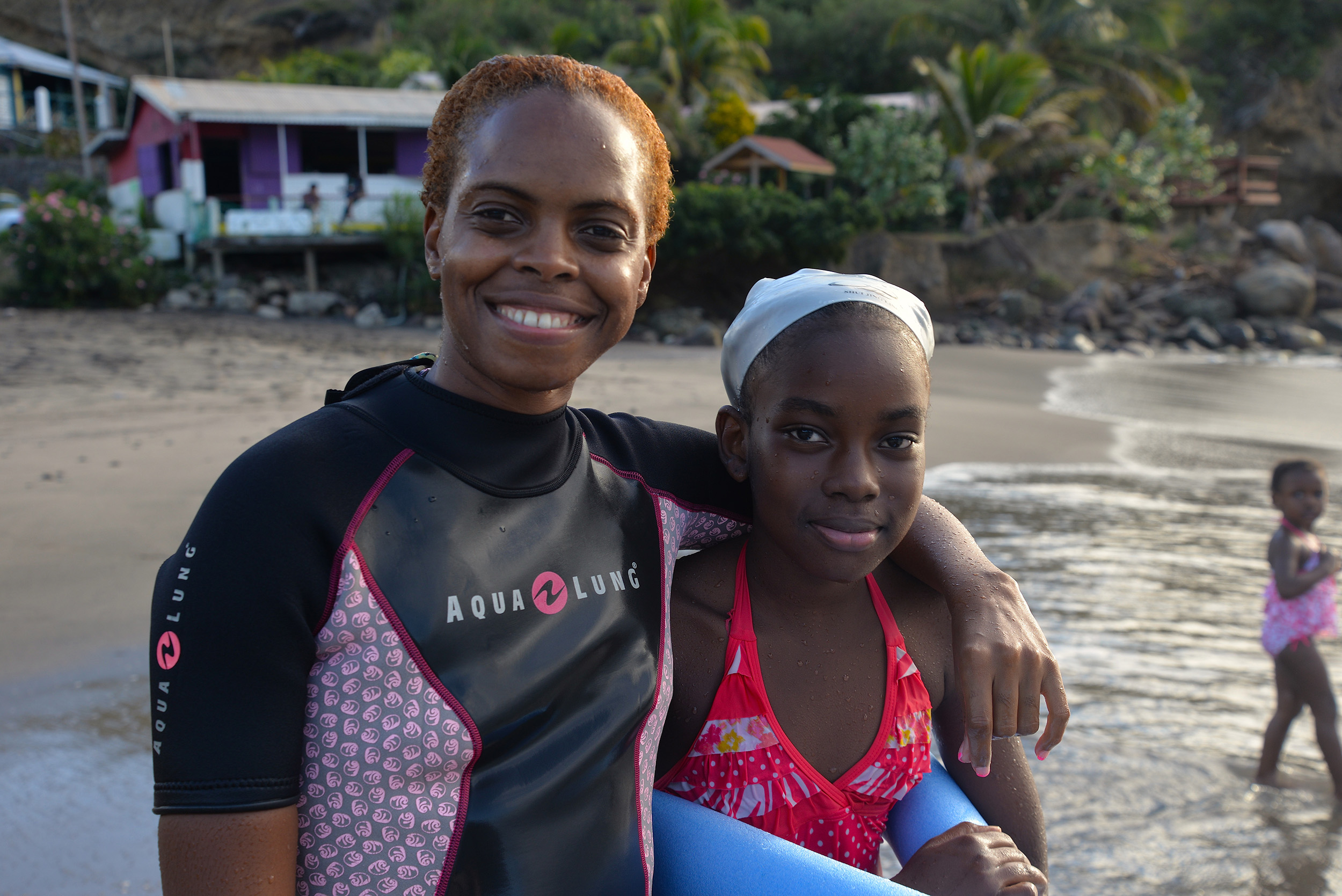 In 1995, Montserrat’s Soufrière Hills volcano began to rumble, prompting the evacuation of two-thirds of Montserrat, with violent eruptions following suit. In 1997, super-heated pyroclastic flows crashed through Plymouth, Montserrat’s once-bustling capital. The abandoned city burned before it was buried by ash and rock.

Two-thirds of Montserrat became uninhabitable, and its most populated areas were abandoned. Thousands crowded into makeshift shelters in schools and churches in the island’s north. By the hundreds, Montserratians boarded planes and boats and left. Wade’s parents sent her to London. The nation’s population dropped from more than 12,000 to just 1,200.

Today, most Montserratians live in the United Kingdom, the United States, Canada, or other Caribbean islands. They started new lives far away from Montserrat’s beaches, the blue waters that sustained their ancestors, and the way of life that had come to define what it meant to be Montserratian.

“There was no place that ever made me feel like home,” Wade recalled of her years in England. “I never would decorate flats or anything because I always felt like it was a temporary situation.” 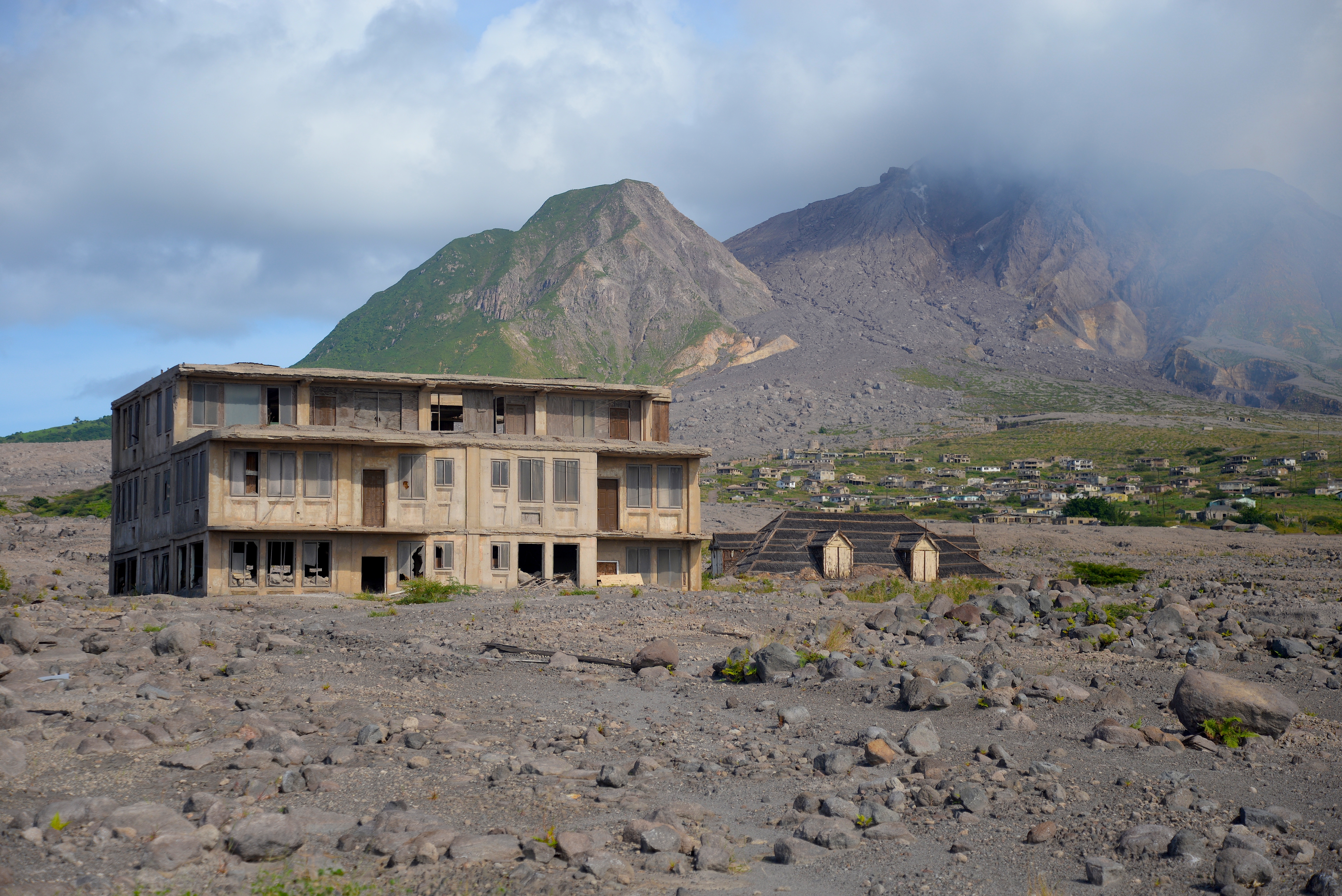 Plymouth, Montserrat’s capital, was destroyed by pyroclastic flows in 1997. Since then, ash has slowly buried the once-bustling city. Photo by Ryan Schuessler

Wade returned to the island in 2011. Having realized that she was losing the very things that she felt made her Montserratian and Afro-Caribbean, she threw herself into the ocean—literally and figuratively. She started Aqua Montserrat, a snorkeling and adventure business, shortly after her return.

In 2015, Wade started Fish ’N Fins, a camp for Montserratian children. For a small fee, local children could get swimming lessons, go snorkeling, and try their hands at lionfish hunting. On moonlit nights, there’s the occasional beach campout where local fishermen and elders teach children the ways Montserratians used the sea to survive.

“Traditionally, fishers or older men would show their children or young boys in the community how to dive, how to swim, how to spearfish, how to line fish,” Wade says. Today, most are too busy “with Facebook, with life, with work.” The camp is her way of working to heal the wounds the volcano inflicted on a generation of displaced Montserratians, much like herself.

For St. Patrick’s in March—a week-long heritage celebration that draws many Montserratians back to the island—Fish ’N Fins will host a special camp for diaspora children who are growing up far from the Caribbean.

“[Fishing culture] is something that’s becoming so rare in the world, and that is a trend that will continue,” Wade says. Yet “to us, this is our way of life. This is so natural to us. And we must remember this, and we must preserve and respect it, and be proud of it.”

Yet to Wade, the camp is not only about preserving the past. It’s about fostering within Montserratian children a strong connection to the ocean.

“At the end of the day, the decisions that are made will be in their hands. And the more culturally aware that they are, and the more environmentally focused, the more they are going to be respectful of the things that I think are so intrinsically important to Montserrat. I talk about the ocean, but it all ties together in terms of our culture.” 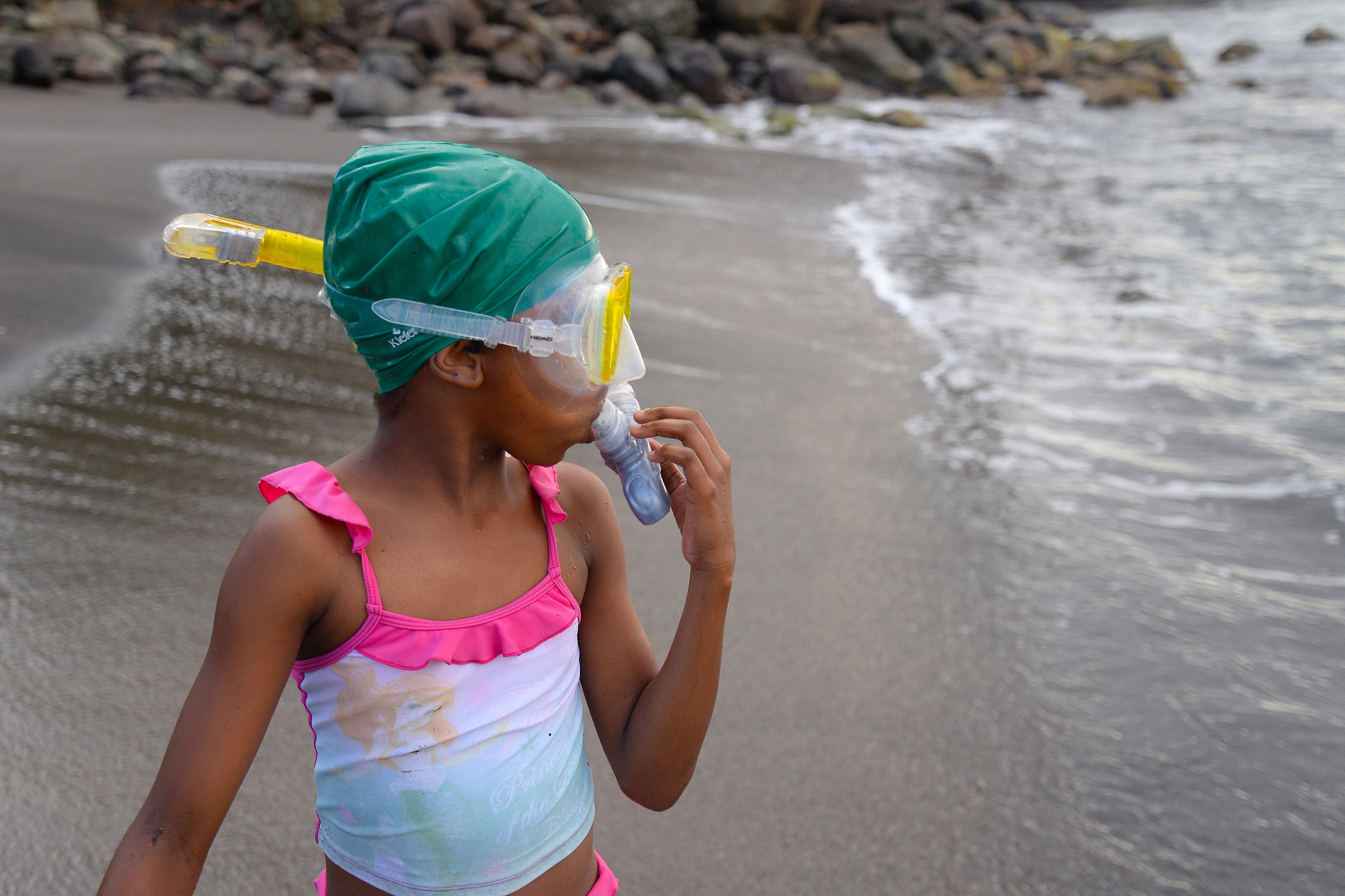 Snorkel ready, fins on, a Fish ’N Fins member gets ready to wade into the water. Photo by Ryan Schuessler

Robin Ramdeen, who works on Montserrat with the Waitt Institute’s Blue Halo project (which donated snorkel gear to Fish ’N Fins), agrees that working with children is a good way to reestablish the importance of this bond with the ocean. “Anything with environmental consciousness or behavior is tough because you have to change somebody’s mindset. With kids, they’re fresh. They’re young. It’s easy to reach out.”

Ramdeen says there has been talk of expanding Fish ’N Fins’ model to other islands in the Caribbean.

As Shary Barzey waded out of the water, the sun setting behind her, Marsha Meade—her mother—took a photo on her phone.

“I want her to learn as much life skills, so when I’m not around, she can manage herself,” Meade says. “Before the volcano, I used to swim, but today I get nervous.”

She adds, with a smile: “Veta’s working on getting me back.”