Many fishermen kill sharks tagged and followed by scientists—and followed by the public via social media accounts. Photo by Stephane Granzotto/Minden Pictures

Scientists track these celebrity sharks with GPS telemetry and share updates on their labs’ websites. The most popular sharks have tens of thousands of followers, a massive audience for science outreach. And while it can be exciting to glimpse into the lives of these mysterious animals, not everything that happens to them is happy news.

“The naming of animals is a two-edged sword,” says Alistair Dove, vice president of research and conservation at the Georgia Aquarium and the creator of the Where’s Domino account that tracks his research team’s tagged whale sharks. “It gives the animal a narrative and a backstory people can follow, and those connections are critical to getting people to bring animals closer to their hearts and to care more about what happens about them. But what happens if those tagged wild animals die, as all animals eventually do? What happens if they die because of human activity?”

Fishermen kill a lot of sharks—and sharks with telemetry tags are no different. A 2017 study reported that fishermen killed nearly a third of all tagged shortfin mako sharks. The scientific organization OCEARCH, which runs the Global Shark Tracker and is responsible for several of the most-followed sharks like Katharine and Mary Lee, says that eight of its 300 tagged sharks have most likely been caught and killed.

“It’s always a little sad and a little frustrating when this happens since it’s a waste of life and money,” says Chris Fischer, OCEARCH’s founder and expedition leader. “We know that sharks are killed every day, but seeing it illustrated clearly on the tracker always stings a little.” 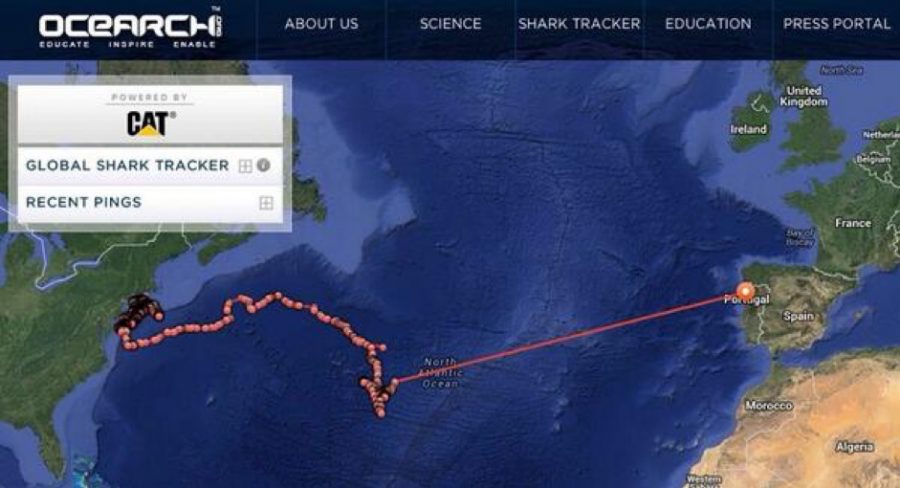 This image shows the satellite telemetry track of Rizzilient, a mako shark tagged in New York waters by the OCEARCH science team. The straight line, which indicates constant speed, suggests that the shark was broadcasting from a fishing vessel.

So far, the OCEARCH-tagged sharks that have died had fewer social media followers than the likes of Katherine and Mary Lee, and the response from social media followers and the broader public has been subdued. On OCEARCH social media posts where they reported the deaths of their tagged sharks, followers have expressed sadness, but nothing remotely approaching the vitriol associated with the 2015 killing of Cecil, the South African lion researchers had been following for eight years. One OCEARCH follower wrote on Twitter, “oh no! 😢funny how quickly you can become emotionally invested in a little orange dot on your screen.”

Interestingly, more social media comments focused on the idea that tagged sharks should be protected than the idea that shark fishing is bad. “I don’t understand why someone would not release a shark with a tracking device on it, legal catch or not,” wrote another follower. And yet another chimed in with, “It’s not only killing the shark, it’s killing the research—there should be a law against killing any tagged shark.”

US law does not protect fish with telemetry tags from fishing but does require fishermen to return the tags to the scientists, which allows them to download the data. If a tag is lost, so is the information—only a tiny percentage of data is broadcast through satellites.

Social media managers for the killed sharks are surprised that public outrage associated with their deaths has not reached the level surrounding Cecil the lion—so far, anyway. “Lions and sharks should be loved equally; they perform the same role in their respective ecosystems,” Fischer says. “I do believe that there would be a stronger public reaction if a shark like Mary Lee, Katharine, or several other of our highly followed sharks were taken, however.”

An emotional public reaction to the death of a celebrity shark could be just the thing needed to educate the public about shark conservation and the consequences of overfishing.

As amazing as the technology and communications strategy behind these shark Twitter accounts are, showing a day in the life of a marine animal sometimes means showing the last day of its life.