Robert Bea had just started a family and bought his first house in New Orleans when the hurricane hit and the waters came. “I swam back to our home,” Bea says. “We lost everything.” When the president showed up after the disaster, he vowed, “This shall never happen again,” Bea recalled.

The storm was Hurricane Betsy, the United States’ first billion-dollar hurricane. It was 1965, and the president was Lyndon Johnson. Forty years after Betsy, Hurricane Katrina hit New Orleans, causing damage costing roughly 100 times that of Betsy. “It was a disaster that took 40 years to unfold, and it should never have happened,” says Bea, who helped lead the National Science Foundation’s investigation into Katrina.

A decade after Katrina, roughly US $14.5-billion has been spent to transform New Orleans into a fortress. “If a carbon copy of Katrina were to show up next week, New Orleans could now withstand it,” says civil engineer H.J. Bosworth Jr., lead researcher for Levees.org, a non-profit group highly critical of New Orleans’ past hurricane defenses. “A lot of lessons were learned in the last 10 years.”

Yet while a lot has been learned, there’s still plenty that could change: sea levels can rise; ground can sink; and marshes protecting coastlines can disappear, warns Bea, who is a professor emeritus at the University of California, Berkeley’s Center for Catastrophic Risk Management.

Katrina hit Louisiana on August 29, 2005. The hurricane killed more than 1,800 people and caused roughly $150-billion in damages, making it the costliest natural disaster in US history.

To say a lot went wrong with Katrina “is an understatement,” says Bea. 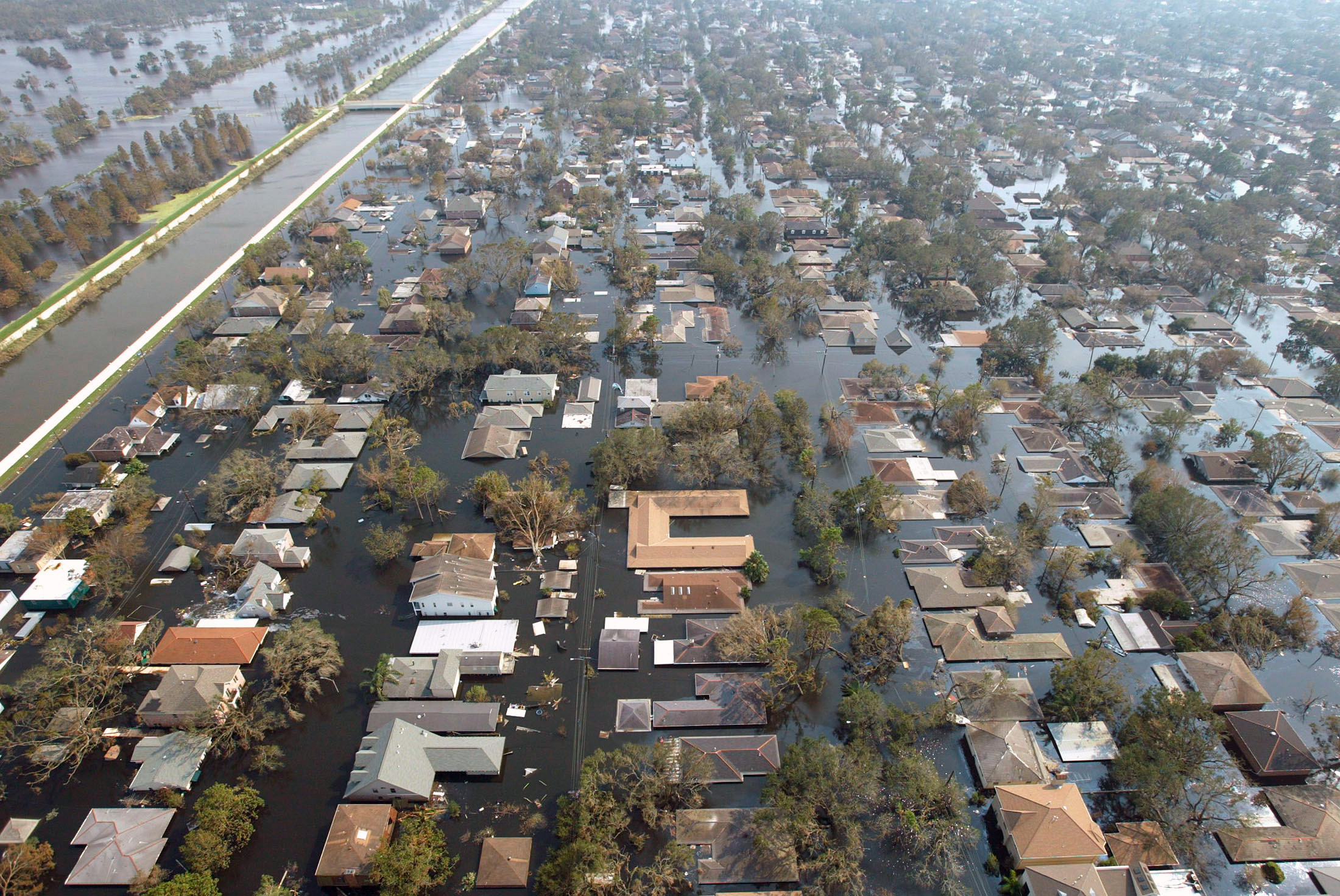 A week after Katrina made landfall in Louisiana, vast stretches of New Orleans remained underwater. Photo by Allen Frederickson/Reuters/Corbis

After Hurricane Betsy, the US Army Corps of Engineers (USACE) was tasked with protecting New Orleans from another hurricane. But those systems “were only 50 percent complete when Katrina struck,” says Karen Durham-Aguilera, USACE’s Director of Contingency Operations and Office of Homeland Security.

USACE’s extensive system of levees—embankments built to prevent flooding—was supposed to protect New Orleans, where half of the city is already below sea level. Yet the levees were poorly designed and poorly made. They were unarmored, too short, and composed of too much sand, leaving them ill-prepared to withstand the surge of water brought on by Katrina. “A lot of them washed away to nothing,” says Bosworth.

One of the main reasons New Orleans’ hurricane defenses were weak before Katrina was that funding came only in dribs and drabs. The resulting system had a patchwork quality, with many weak points. In contrast, the $14.5-billion that the US Congress voted New Orleans’ way after Katrina was promptly delivered up front.

As a result, a multi-billion-dollar fortress now protects New Orleans. 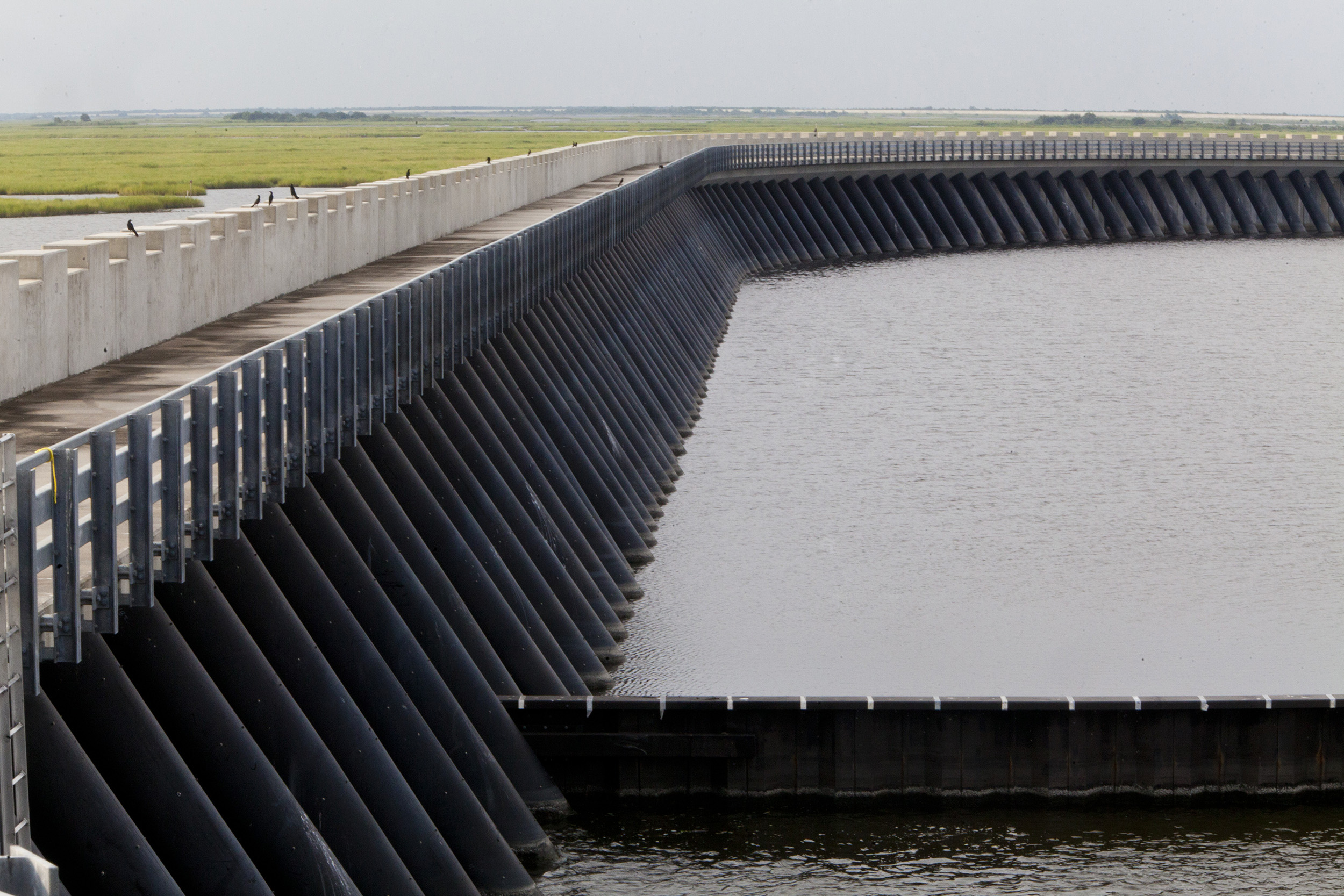 The Lake Borgne Surge Barrier is an eight-meter-high wall along the city’s eastern flank. Photo by Philip Gould/Corbis

One part of the defenses, the 3.2-kilometer-long Lake Borgne Surge Barrier, blocks water from Lake Borgne, actually an arm of the Gulf of Mexico, from getting into the city from the east. “We call it The Great Wall of Lake Borgne,” Bosworth says. The pre-Katrina walls and levees stood four meters high; the Great Wall is twice that. In addition, a system of massive gates blocks water from Lake Pontchartrain to the north of the city. Helping these barriers is a powerful pumping station—the world’s largest—which is capable of draining an Olympic-sized swimming pool in four seconds.

Now, New Orleans’ defenses take geological features, such as ancient buried sandbars, into account. “All the structures that were earth-supported have been armored and buttressed and reinforced with real foundation pilings behind them. The walls should hold just fine if a hurricane like Katrina hits again,” says Bosworth.

All in all, New Orleans’ new hurricane defenses are built to prevent the level of flooding expected from a one-in-100-year storm.

However, Katrina was probably a one-in-400-year storm, more powerful than this 100-year standard. Still, Durham-Aguilera says that New Orleans’ reinforced hurricane defenses are resilient against up to a one-in-500-year storm. Even if water from such a massive storm manages to make it over the city’s barriers, the pumps and other infrastructure should prevent this flooding from doing much damage.

While Bea agrees that New Orleans could probably withstand a Katrina-level hurricane, he is skeptical about the future. Melting icecaps, rising global sea levels, and increased risk of flooding worldwide will likely boost the intensity of hurricanes and storm surges. In addition, the ground under New Orleans is sinking, making it more vulnerable to flooding, and Louisiana has lost marshes that would naturally buffer against hurricanes. In the seven decades preceding Katrina, Louisiana lost wetlands totaling about 4,900 square kilometers, an area the size of Trinidad and Tobago.

Durham-Aguilera says the present system is “designed to face projected sea level rise and climate change over the next 50 years.” More earth and more armor will be added, and Louisiana plans to create 100 square kilometers of new wetlands by 2031.

Yet no matter what defenses New Orleans might have in the future, Bea urges vigilance.

“I’ve spent my life fighting water, and it’s damned difficult,” Bea says. “Water will find your weaknesses and exploit them.”