University of Alaska Anchorage doctoral student Veronica Padula fishes a dead seabird from the Bering Sea near the remote Alaska island of Saint Matthew. Her advisor, ecologist Doug Causey, has been collecting birds from the Bering Sea since 2009 to support research on food web shifts, plastic contamination, and other problems facing northern oceans. Photo by Nathaniel Wilder

“There’s some little guys hanging out in the water over there!” says deckhand Shlomo Gherman, steering the Zodiac toward a small flock of seabirds. A July squall blurs the nearby cliffs of Saint Matthew Island, more than 400 kilometers west of mainland Alaska, in the Bering Sea. Doug Causey, an ecologist from the University of Alaska Anchorage, swivels on the gunwale, following the birds as they lift off, then raises a shotgun and fires.

A gray body biffs into the waves. Veronica Padula, who is working with Causey on part of her doctorate, retrieves it with a hand net. “Parakeet auklet,” she confirms.

“Parakeet!” she shouts over the wind.

Back aboard the Tiĝlax̂—the research vessel of the Alaska Maritime National Wildlife Refuge, pronounced TEKH-lah—Causey looks a bit like a seabird himself in his bulky black hoodie. He leans over five new specimens—two auklets, with eerie white eyes, and three pigeon guillemots, raven-sleek with improbably red feet.

Make no mistake: Causey loves birds. Watching footage of nesting northern fulmars one night in the ship’s galley, his eyes had grown moist. Still, he handles the dead without sentiment or revulsion. A few days earlier, he had not hesitated to grab a few rotting guillemots and glaucous gulls from a fox den. “Oh! Oh … with your bare hands?!” Padula had exclaimed.

“There’s nothing so gross that I won’t pick it up,” he replied.

Now, with the fresh birds arrayed before him, he clips numbered tags through their webbed feet and measures wings, bills, legs, and tails. Padula embosses separate metal tags to be attached to the birds’ ankles before each is wrapped in foil and filed away in the freezer for later dissection in Anchorage.

In its early days, biology hinged on killing and collecting creatures to catalog the world’s species. Causey’s work has shades of that now-rarer 19th-century practice—“John J. Audubon wouldn’t have been in a Zodiac with a motor, but he would have had a shotgun and a boat,” Causey points out. But this collection is meant to catalog something more insidious: a story of Bering Sea change that is writing itself into these birds’ very bodies. 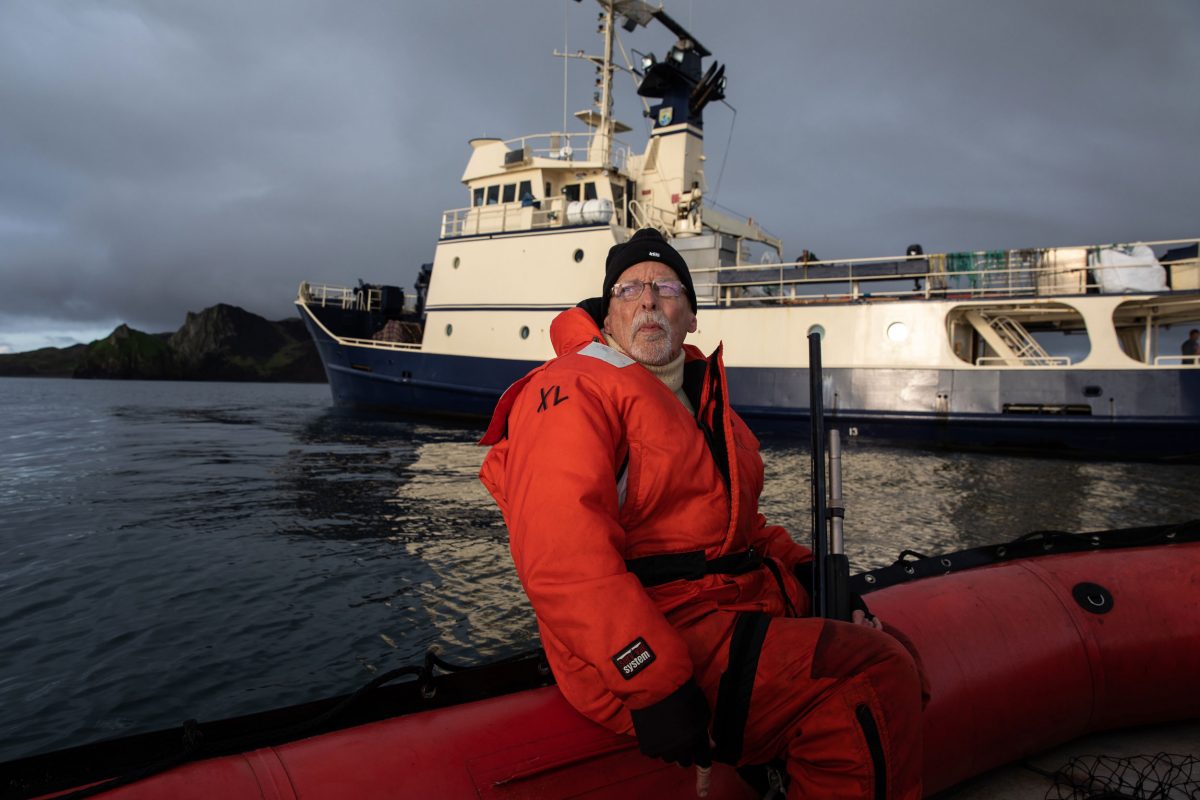 Ecologist Doug Causey heads out from the US Fish and Wildlife’s Tiĝlax̂ research vessel to collect seabirds with a shotgun. Though the practice can be controversial, it supports several inquiries into long-term environmental change in the Bering Sea. Photo by Nathaniel Wilder

Back in 2009, on a Tiĝlax̂ trip to the Aleutian Islands at the far western end of the wildlife refuge, Causey noticed that the breeding populations of cormorants had plummeted. “Something was happening to the marine environment,” he says.

He turned to the seabirds themselves to find out what. Because they forage over great distances and different species eat different things—from plankton at the bottom of the food web to fish in the upper threads—examining what a suite of them are eating will tell you what kinds of food are available in the ocean and, by extension, how those foods might be changing along with ocean conditions. But instead of looking at birds’ stomach contents, which provide a snapshot of one meal, Causey is scrutinizing their feathers with a technique called stable isotope analysis.

Isotopes are atoms of the same element, such as carbon or nitrogen, that have slightly different masses. Foods have unique ratios of these isotopes. As a body incorporates a food, these ratios are preserved—a library of meals recorded in the flesh. “If you eat a ham sandwich, within about half an hour we can detect the stable isotopes that are associated with that ham sandwich out of your breath,” Causey says. “In about 10 to 15 days, we can detect the stable isotopes from your ham sandwich in your red blood cells. In 30 days, in your blood plasma.” With birds, researchers can do the same with different feathers based on when each part of their plumage comes in—sussing out what the animals were eating as far back as a year.

With this in mind, Causey has so far collected and salvaged 910 seabirds of 10 different species from the Alaska Maritime National Wildlife Refuge with the Tiĝlax̂’s help over the past decade—primarily from the Aleutians. Though analysis is ongoing, preliminary findings are alarming. Within the past five or so years, he says, the birds’ diets have become more varied. Northern fulmars, for example, a relative of the albatross, primarily eat krill—a tiny floating crustacean—but now seem to be leaning ever more heavily on other kinds of plankton.

“When you see widespread increasing variability, it means that the ecosystem is going through a change,” he says. And if that change ultimately means the seabirds’ favored foods are harder to come by near the islands where they rear their young, it could be one factor driving population declines. Seabirds are capable of foraging over vast distances, so they can follow food—to a point. “Until birds can figure out how to lay their nests on water,” he says, “they’re stuck to an island to breed.”

Each collected bird supports not just the stable isotope project but several others as well. One graduate student examines samples for novel forms of influenza and other viruses that could harm people—an increasing concern as animals shift their ranges because of climate change. One of Causey’s colleagues collects the birds’ parasites. Some tissues are measured for the presence of toxins from harmful algal blooms, another byproduct of Bering Sea warming; others are sampled for plastics and their byproducts. Specific data for each animal is also entered into vertnet.org, an international catalog of specimens, where other researchers can use it, too.

Padula first started helping Causey as a side project a decade ago while completing a master’s degree on fish, then began her interdisciplinary doctorate in 2014, part of which assesses the collected birds’ exposure to phthalates, a class of endocrine-disrupting chemicals used to make plastics more pliant. Like the signs of ecosystem change, the chemical news isn’t encouraging. Every individual of every species tested has tissue contaminated with at least one form of phthalate.

Gathering such information makes collecting worthwhile, despite the controversy it can bring, Causey believes. His target species aren’t rare, and most of these projects require a whole animal. And while it is possible to sample feathers from live birds, he adds, in the dense colonies of the refuge, that would likely be more disruptive to breeding populations than gathering a few at sea under a carefully regulated US Fish and Wildlife Service permit.

Generally, the Alaska Maritime National Wildlife Refuge no longer collects its own specimens. But supervisory wildlife biologist Heather Renner recognizes the value of Causey’s work. Some 40 million seabirds flock to the refuge to breed, so information on their ecology and the threats they face is “tremendously helpful,” she says. “Some of these questions about what they’re eating at other times of the year, or over a longer period, we just can’t answer without some of these more integrated types of studies.”

For her part, Padula struggles with the collecting process. “It sucks a lot,” she says bluntly. But she hopes that amplifying what she, Causey, and others are reading from the birds’ bodies will inspire empathy for these species and the growing burdens they bear in the already harsh places where they make their homes. Few people get to visit places like the Aleutians and Saint Matthew and understand how special they are, she says. “There are things happening there that, unless someone is sharing the story, people don’t really get to know about it.”