The oil that flows in pipes away from Canada’s oil sands is not the same as conventional crude oil. Known as diluted bitumen, or “dilbit,” this proprietary blend of oil and chemicals behaves differently in the event of a spill. Or, scientists suspect it does. So little research has been done on the environmental and ecological effects of dilbit that it’s hard to say for sure. As a first step toward understanding the risks posed by dilbit, scientists working with Alberta oil sands dilbit found that the tacky mixture can cause a range of serious toxic effects in fish.

Canada’s oil sands are home to a huge amount of oil: they’re the third largest reserves in the world after Saudi Arabia and Venezuela. Around two million barrels are produced each day.

To keep up with production, which is expected to nearly double over the next decade, three new pipelines are being planned: Northern Gateway to the Pacific coast, Keystone XL to the Gulf of Mexico, and Energy East to the Atlantic. These controversial pipelines are in fairly advanced stages of planning. So, you would reasonably assume that oil companies and ecologists have a good idea of how a dilbit spill would affect ecosystems, or at least how to best clean it up.

You would be wrong.

Greg Pyle, an aquatic toxicologist at the University of Lethbridge in Alberta, recently pulled together all the research he could find on the behavior and toxicity of dilbit. He didn’t find much.

“Nobody’s really been thinking about it, despite the fact that we have all these plans for pipelines,” says Pyle. “There’s not a lot of funding available to do the work.” 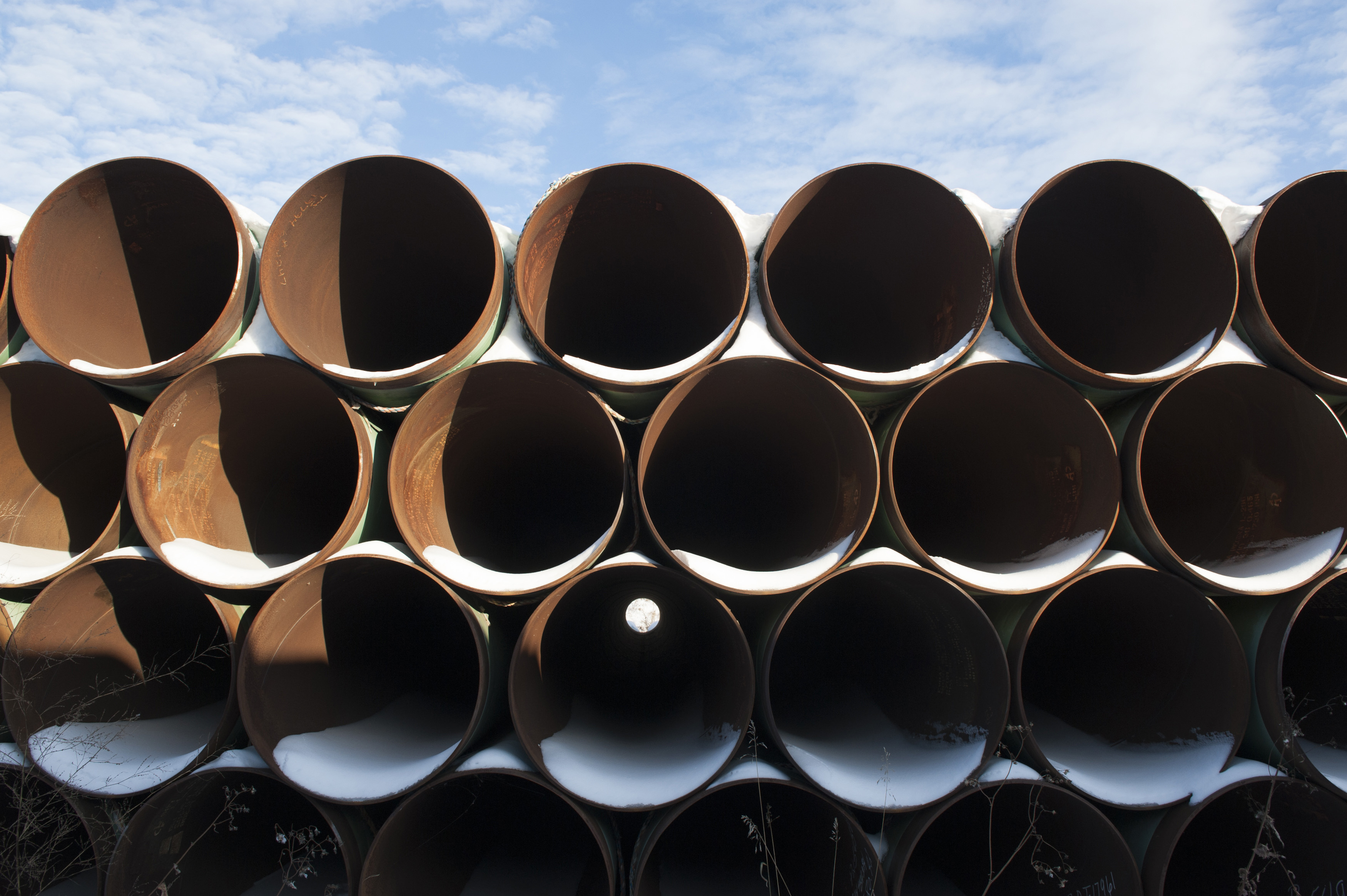 Pipe segments for the hotly debated Keystone XL pipeline sit at a storage depot in North Dakota in November 2014. Photo by Andrew Cullen/Reuters/Corbis

Understanding the environmental effects of dilbit, says Pyle, depends on knowing two things: how toxic it is to wildlife, and whether it floats on water.

In the first laboratory study of how dilbit affects the development of fish, researchers from Royal Military College in Kingston, Ontario, found that fish embryos exposed to dilbit have serious problems, including deformed hearts and abnormal swim bladders.

The toxic effects are similar to those caused by conventional oil, but Barry Madison, a fish physiologist who worked on the study, says it is important to do the work on dilbit as well.

Testing the toxicity of dilbit is particularly tricky because dilbit is highly variable. Undiluted bitumen, the oil extracted in the oil sands, is too thick to flow through a pipeline, so companies add various oil and gas condensates, like gasoline, to make it flow. Yet each version of dilbit is a different blend, and components are often adjusted seasonally to cope with the changing temperature. Madison worked with Access Western Blend, one of the most common blends, but there are at least half a dozen other varieties. Specific dilbit formulations are proprietary, so most recipes are secret.

“We know the basic chemistry, but not the proportions of different things without analyzing samples constantly,” says Madison. “These uncertainties make it challenging to assess its toxic implications.” 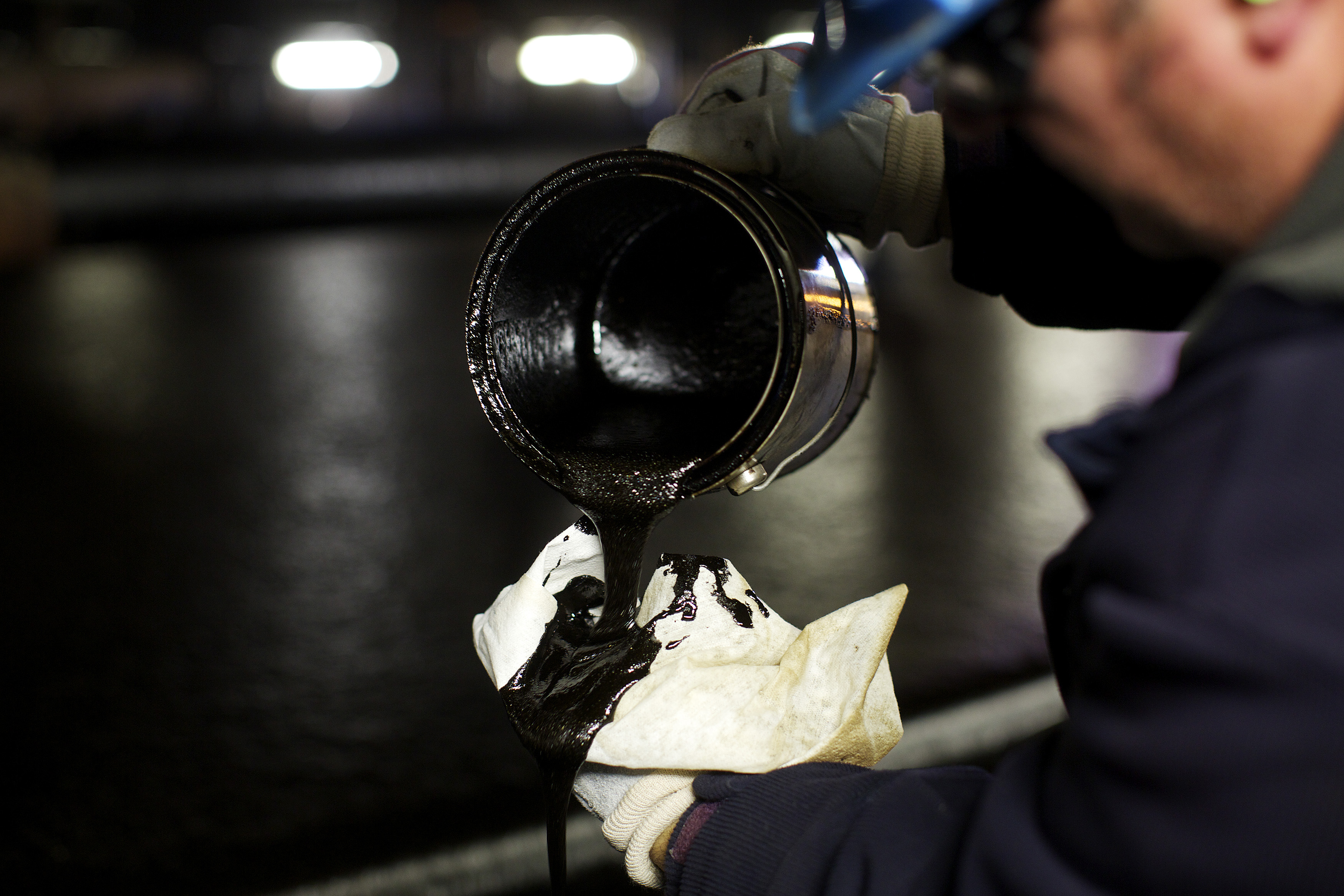 Scientists know a bit more about how dilbit mixes with water, but there are still gaps. Most research, for instance, has focused on saltwater rather than freshwater.

Immediately after a spill, dilbit floats on water much like conventional oil. With a quick response, a spill can be contained and skimmed from the surface. But as the condensate additives evaporate and the dilbit interacts with dirt and other particles, the oil begins to sink. Once the oil gets into the sediment, it is very hard to get rid of.

This is what happened in 2010, when dilbit spilled into Michigan’s Kalamazoo River. That spill was pretty much the worst-case scenario, says Pyle. The dilbit spilled onto land, picking up dirt and losing the lighter condensates as it traveled to the river, where it entered fast-flowing water and sank to the bottom. Much of the oil hung around for years, and the large-scale dredging operations to clean it up did almost as much damage to the ecosystem as the initial spill.

“We’re not terribly experienced with this yet,” says Pyle. “There’s still a bit of trial and error involved in cleanup.” 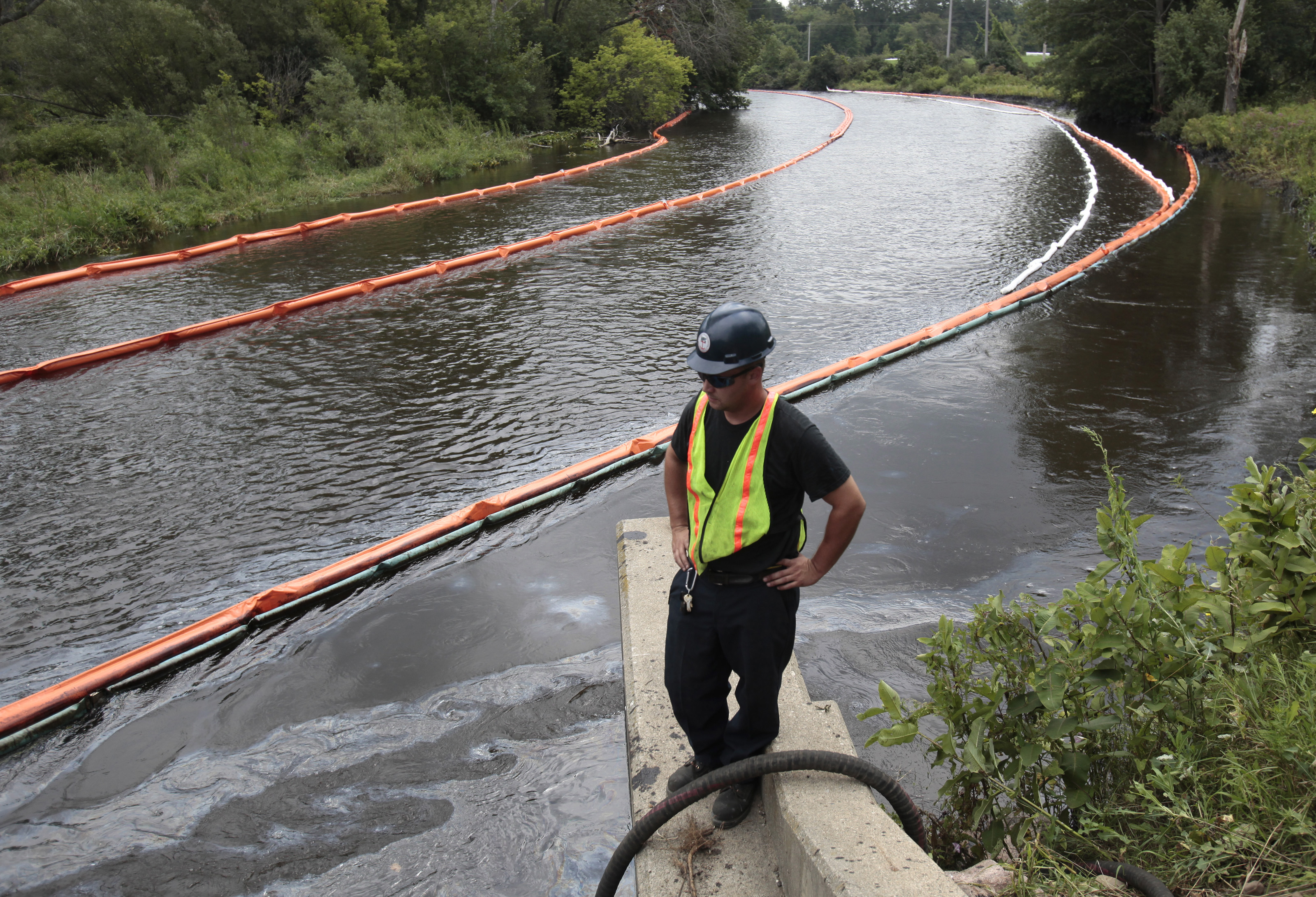 A worker watches as oil spilled on the Kalamazoo River is swept up by a boom on July 31, 2010. Photo by Rebecca Cook/Reuters/Corbis

The companies that operate dilbit pipelines say they understand the need to clean up a spill before it can get into the sediment. “It is very important that in any spill emergency response is mobilized quickly,” says Ivan Giesbrecht, a spokesman for Northern Gateway. “That’s why our safety plans include using tugboats capable of responding immediately to provide spill source control and containment. That is why our plan includes emergency response capabilities at points along the proposed shipping routes.”

The Canadian government may have been slow to support work on the toxicity and behavior of dilbit before now, but Patrice Simon, director of environment and biodiversity sciences at Fisheries and Oceans Canada, says that they are picking up speed.

“Everything related to dilbit is a priority now,” he says. “We’re going to see more and more of this kind of research.” The department is funding Madison’s work, as well as several other studies, to help guide how the government will respond to potential future spills, says Simon.

This research can’t come soon enough for Pyle. “There are lots of things we don’t know that we really should before we develop these pipelines,” he says.