Peppermint shrimp, a species of cleaner shrimp, show an affinity for the taste of parasite eggs, making them good candidates for employment in tropical and subtropical aquaculture operations. Photo by Stocktrek Images, Inc./Almay Stock Photo

In the coral reefs of the western Pacific Ocean lives a candy-striped creature with a minty-fresh name. Commonly known as the peppermint cleaner shrimp, this tiny crustacean provides a cleaning service for other fish by nibbling off skin parasites. Now, scientists in Australia are looking to the peppermint shrimp to take on a much bigger job: fighting disease on fish farms.

David Vaughan, a biologist at James Cook University in Australia, recently introduced a test cohort of peppermint cleaner shrimp to a tank of farmed grouper and found that the rate of infection by the parasite Neobenedenia girellae was 87 percent lower than in a control group without the shrimp. The trial was the first-ever test of a shrimp’s prowess as a natural form of pest management in aquaculture.

“I didn’t expect them to work as well as they did,” Vaughan says, adding that the shrimp coped well with crowding and water conditions similar to those found in aquaculture facilities. “That surprised me.”

Farmed animals are often kept in crowded conditions, which makes them particularly susceptible to disease and parasite infestations. The toll of these parasites is significant and includes increased fish mortalities, decreased fish quality, and the need for expensive therapeutic treatments. One study from 2015 estimated that the annual economic impact of parasites in aquaculture sits somewhere between US $1-billion and $9.5-billion. Typically, fish farmers fight parasites with pesticides, which come with risks to the environment and human health.

Harnessing natural parasite predators to reduce the need for chemical treatments is not a new practice. In Norway, for instance, salmon farmers use cleaner fish such as wrasse and lumpfish to fight sea lice infestations. But there’s currently no equivalent biological control for tropical or subtropical aquaculture. Vaughan thought cleaner shrimp might be able to take on this task.

Vaughan’s first experiment evaluated the appetites of four cleaner shrimp species for three common parasites. In his lab, he held a contest of sorts, where each species of shrimp had the opportunity to feed on each species of parasite twice—once on adult parasites that had infected the skin of a grouper and once on the pests’ eggs, cysts, and cocoons.

Each shrimp species displayed slightly different tastes. While some targeted mature parasites, the peppermint shrimp were especially keen on eating the eggs, cysts, and cocoons. This was key.

The peppermint shrimp’s preference for these earlier life stages suggests they might break the cycle of reinfection that plagues many fish farms. Chemical treatments are only effective against mature parasites, so if any eggs remain, the farm is likely to be reinfected. A successful sweep of the tanks by egg-eating cleaner shrimp could reduce the need for chemical intervention.

In a follow-up test, Vaughan and his colleagues placed 30 peppermint shrimp into 500-liter aquaculture tanks populated with grouper. The fish were contained in mesh cages that had been colonized by N. girellae. In this test, the peppermint shrimp excelled. They gobbled up the parasite eggs on the mesh and reduced the groupers’ rate of infection by 87 percent. 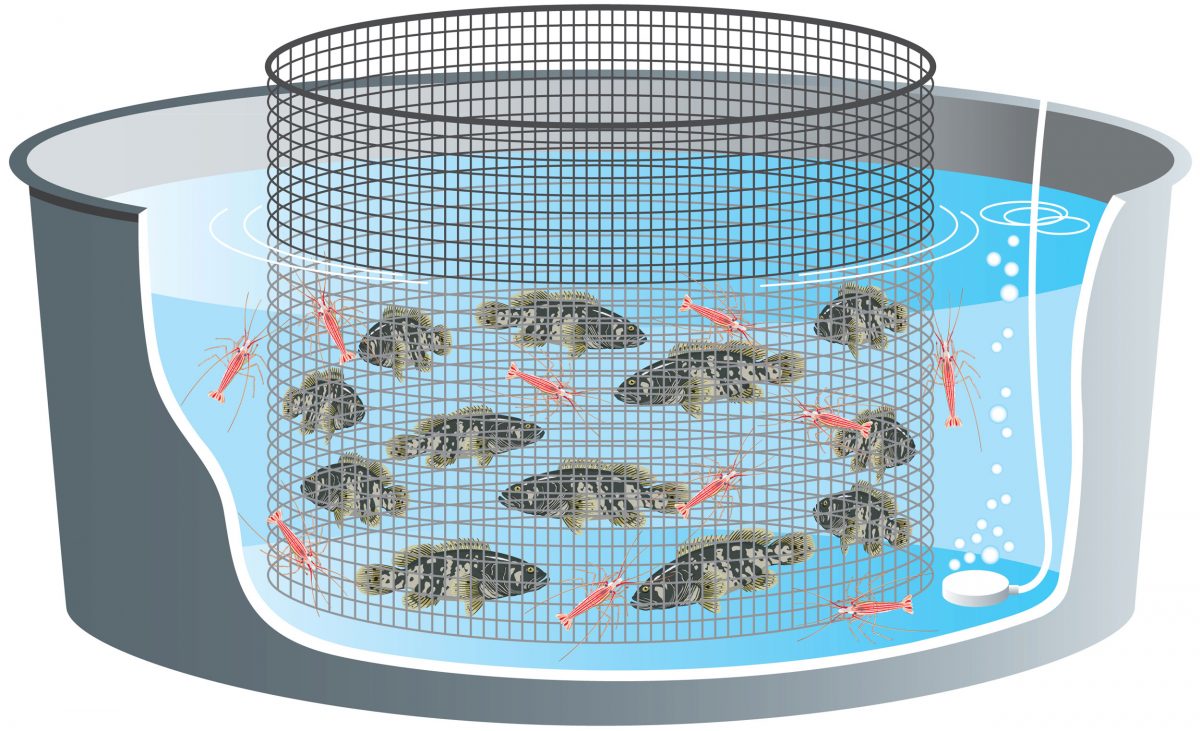 In this test scenario, peppermint shrimp were separated from grouper. By eating the parasite eggs on the mesh cage, the shrimp reduced the parasite infestation rate on the adult grouper. Illustration by David B. Vaughan, Alexandra S. Grutter, Kate S. Hutson; Aquaculture Environment Interactions 2018

Vaughan says the peppermint cleaner shrimp’s parasite-eating prowess is only one reason the species would be an ideal candidate for use in aquaculture. The shrimp is tolerant of crowding, so it’s not a problem to put a bunch of them in a tank together. Their native range also extends from Australia to Russia, so their use could be widespread. And, perhaps most importantly, the species is already bred for home aquariums, so Vaughan is optimistic that they could be bred at the scale required for aquaculture.

That doesn’t mean this little cleaner is ready to hit the big leagues. Enrique Blanco Gonzalez, a biologist who studies the wrasse fishery in Norway and was not involved in the research, says introducing cleaner species—fish or shrimp—to marine aquaculture in large numbers can strain the local ecosystem. The shrimp could escape, they might carry their own diseases, and they might feed on organisms other than the parasites, potentially messing with the population dynamics in the community. “You first need to run some pilot experiments to understand how the system will respond before you scale up the project,” Blanco Gonzalez says.

Vaughan acknowledges there is more work to do: “We need to actually look very carefully and start evaluating where these limitations are and then start focusing on how we can mitigate those down the line in terms of applicability in aquaculture.”