A crowd gathers at the edge of the brackish water in Malaysia’s Setiu Wetlands. It’s an odd mix of people—fishermen, politicians, scientists—and all of them are staring at their feet, where nearly 100 10-legged, dinner-plate-sized, alien-like creatures are crawling about.

It’s early on a Sunday morning in July, and they’re here to witness the swarm of horseshoe crabs being released into the wetland on Malaysia’s eastern coast. For these ancient yet imperiled living fossils—they predate dinosaurs by 200 million years, and have changed little since—this was the last stop on a four-day, 250-kilometer journey meant to save them from becoming someone’s dinner. Now, they’re free to swim in Southeast Asia’s first horseshoe crab conservation area.

Horseshoe crabs are found throughout Asia, from China to Indonesia. The region is home to three of the world’s four species—the Chinese, coastal, and mangrove horseshoe crabs. Some crabs, such as the large Chinese ones, are coveted by the pharmaceutical industry for their endotoxin-detecting blood. (The same fate affects the Atlantic horseshoe crab, found along North America’s eastern coast.) But crabs in this part of the world face additional threats from human consumption, habitat loss driven by rapid development, and a lack of government protection.

The crabs are eaten in some parts of Malaysia and Thailand, where they’re known as Belangkas and sell for as much as US $7 each. Female crabs and their eggs are a delicacy. Their meat is added to spicy stir-fries, curries, and stews. But in Malaysia’s east, horseshoe crabs are rarely on the menu. Moving the animals, then, is a simple solution to a complex problem.

“This is fast action to save horseshoe crabs from ending up in frying pans,” says biologist Faridah Mohamad, who is co-spearheading the government-funded project.

To kick-start the project, Mohamad’s team from the University of Malaysia, Terengganu, purchased 100 coastal horseshoe crabs from fishermen down south, where they are eaten. The animals were placed in polystyrene boxes in the back of a pickup truck and transported to the university’s hatchery three hours away. Although one crab died, Mohamad says the crabs are quite hardy and easy to transport. All the team had to do was drive at nighttime and keep the boxes on ice to ensure the crabs remained cool in Malaysia’s 30 °C heat.

Upon arriving at the hatchery, the crabs were transferred to large blue tanks to get them acclimatized to the slightly less saline local water. Mohamad’s team then spent the next few days taking measurements—carapace width, tail length, weight, and so on—which will serve as baseline readings for follow-up assessments in the coming months. They then fitted each animal with white, poker-chip-sized tags bearing an ID number and a telephone number for local fishermen to ring when the crabs end up in their nets. With the crabs now set loose on the Setiu Wetlands, the researchers plan to return every week to monitor their growth. 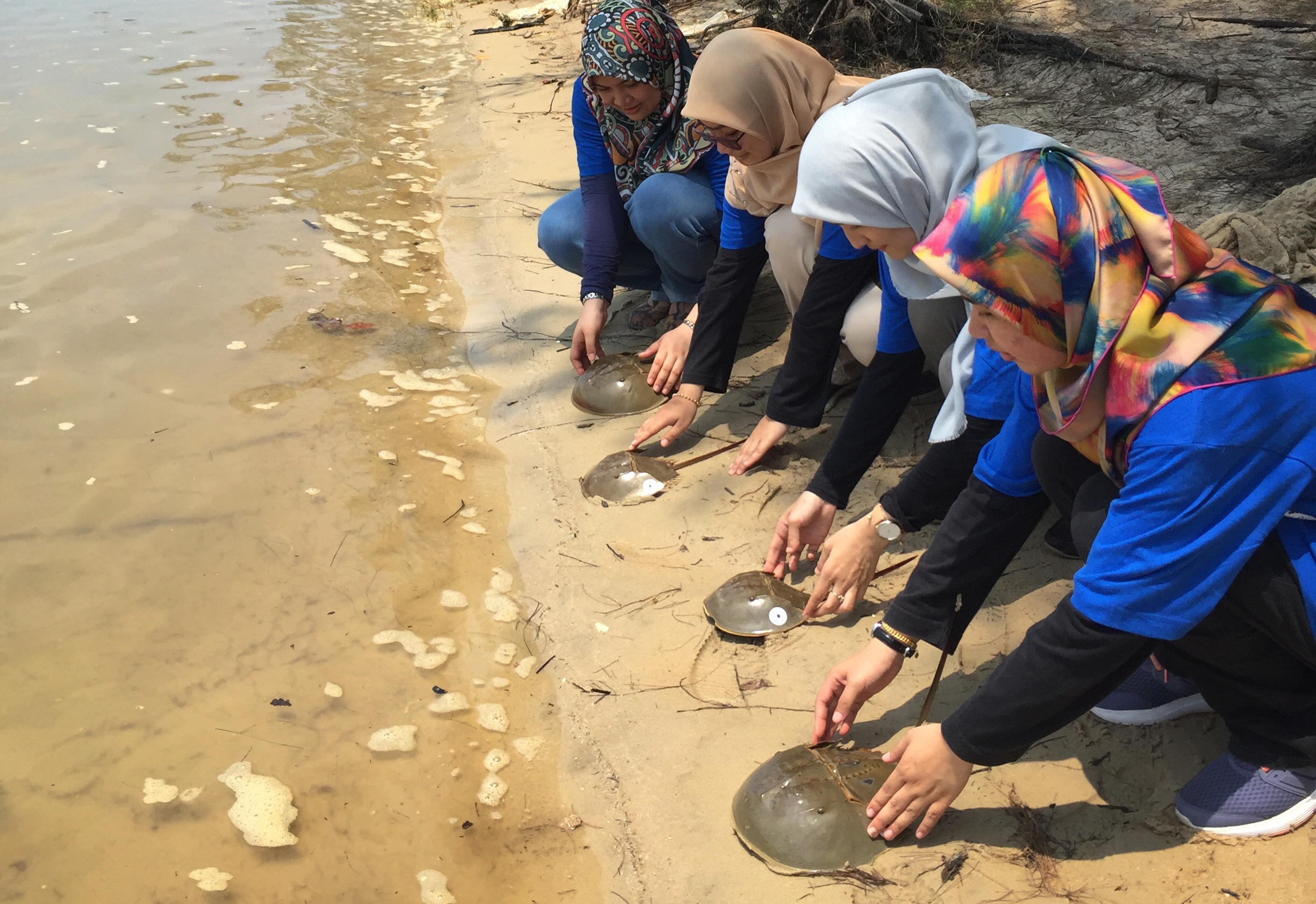 Until recently, horseshoe crabs have had few advocates in Asia. In many countries, “conservation is not a very high priority,” says Siu Gin Cheung, a marine biologist from the City University of Hong Kong who is part of a horseshoe crab specialist group with the International Union for Conservation of Nature.

But in 2011, a scientific conference focused solely on Asian horseshoe crabs was held in Hong Kong. The meeting brought the scattering of horseshoe crab researchers from across the area together for the first time. It was a watershed moment, says Cheung. Prior to that, “people in one country didn’t know what others were doing in the rest of Asia.”

The conference spurred efforts to start protecting horseshoe crabs. Six years on, countries are now protecting the species. Japan, along with Taiwan and China, also have laws in place to safeguard breeding grounds. On a smaller scale, researchers in India and Malaysia are working on captive breeding. Then, there’s Mohamad’s relocation project.

Over the next two years, Mohamad and her team plan to release 2,000 horseshoe crabs into the Setiu Wetlands, which she hopes will become a natural nursery and foraging area.

As Mohamad stands at the edge of the mangrove forest, headscarf fluttering gently in the mid-morning breeze, she watches the crabs slip into the gray-green water and burrow into the cool sand below. She says, “Hopefully with our effort, we’ll have a few places in Malaysia where we can really focus on getting this animal thriving without threats.”