California mussels’ shells are naturally black, which causes them to absorb a lot of solar radiation when they are exposed to the open air at low tide. Photo by Alyssa-Lois Gehman

Endolithic parasites are troubling California mussels, which live in rocky intertidal areas from Mexico to Alaska. But as new research shows, they might also be helping them.

Endoliths are a range of microscopic organisms that live in shells, coral, or even rock. Some of these organisms complicate the lives of bivalves by dissolving the bicarbonate in their shells. For California mussels, the endolith culprit is likely an unidentified cyanobacteria. But even if scientists don’t know exactly what to blame, the carnage is having very real consequences. Sometimes, the endoliths open a hole clear through the mussel’s shell, killing the animal inside. But even in less acutely lethal cases, the endoliths dissolve away the shell’s surface, causing it to transform from black to bluish-gray.

In hotter areas, however, this endolith may actually be giving some California mussels a helping hand. New research shows the change in shell color that results from the endoliths’ activity helps California mussels cope with the high temperatures they experience at low tide, when they are exposed to the air and direct sunlight.

California mussels straddle a liminal habitat between low and high tides. The lower limit of their world is set by how high aquatic predators, such as sea stars, can usually reach into the intertidal. Their upper limit is determined by the weather, since prolonged exposure to the sun during low tide can desiccate and kill the shellfish.

Previous research shows that Mediterranean and brown mussels in Portugal and South Africa parasitized by endolithic organisms are capable of dealing with higher temperatures. Alyssa-Lois Gehman, a postdoctoral research fellow at the University of British Columbia and the Hakai Institute*, wanted to see if endoliths are also giving California mussels a boost in coping with the sun’s heat. 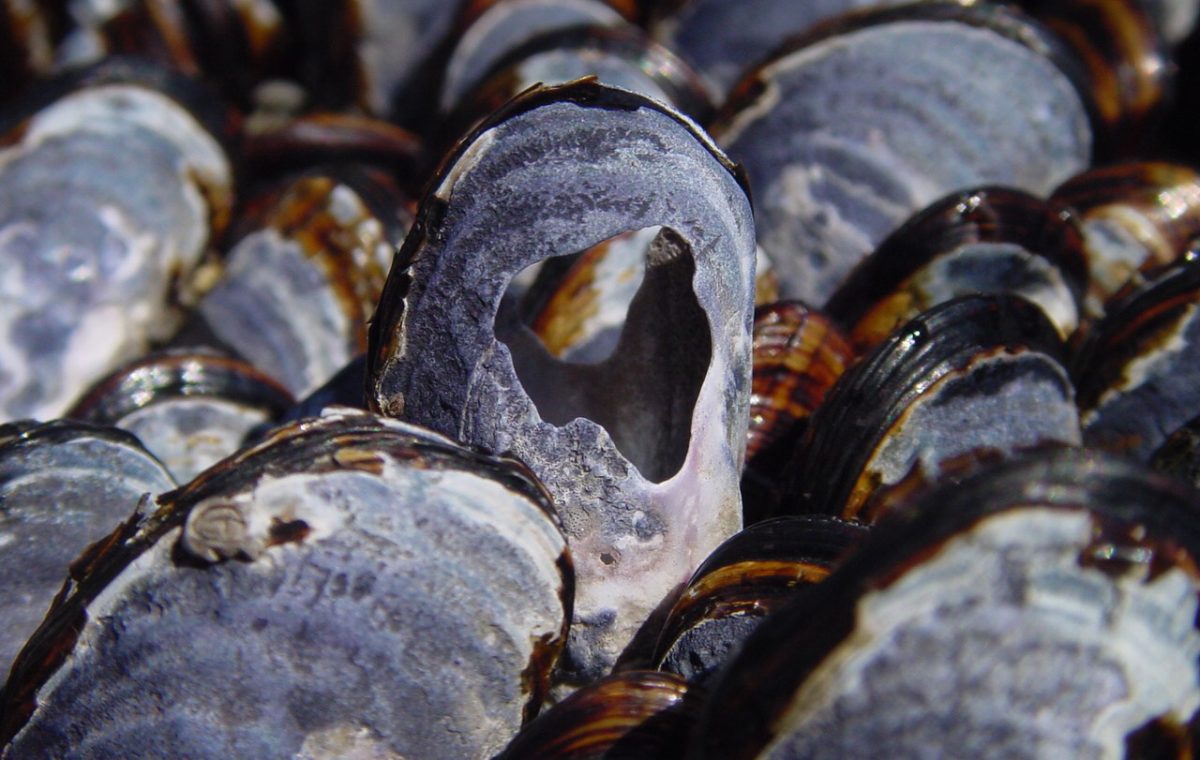 Endolithic parasites can reduce the reproductive rate of, or even kill, California mussels. Photo by Chris Harley

The results reveal it is the difference in color that helps the creatures cope with higher heat levels, Gehman says. “We’re essentially showing that this one interaction can be negative or positive, depending on the context.” The effect, Gehman says, is that the endolith’s activity actually increases how long the mussels can survive out of the water, and thus increases the area where the mussels can live.

Even with the help of the endoliths, it’s likely that mussels living highest in the intertidal zone are already at the limit of their heat tolerance. As the world warms due to climate change, it’s possible that a larger proportion of the mussels may become more reliant on the parasites just to survive where they already are, Gehman says. But the slight heat tolerance benefit provided by the endoliths could still be outweighed by the negative effects of the parasite.

Gerardo Zardi, an ecologist at Rhodes University in South Africa who conducted the earlier work in South Africa and Portugal and was not involved in the new study, says he is happy others are paying attention to this interaction, which has implications for how mussels will cope with climate change.

Zardi says a better understanding of the interaction is important, since mussels are ecosystem engineers that create habitat for other sea life. “Any change that happens to mussels has significant repercussions on other species,” he says.