Little penguins, such as this one walking on the shore of Kangaroo Island, South Australia, have a varied diet that includes gelatinous prey. Photo by Jurgen and Christine Sohns/Minden Pictures

Some penguins like their fish with a side of jelly, a new study shows. By looking at the DNA in the birds’ poop, researchers found that they eat a surprising amount of gelatinous prey, including tiny tube-shaped animals called salps. Knowing what’s on the menu for penguins is important for understanding the health of not just these seabirds, but of their whole ecosystem.

Catherine Cavallo, a PhD candidate in ecology at Monash University in Australia, is trying to turn seabirds into tools for learning about ocean environments. In particular, she studies little penguins, which get their name for being the smallest of all penguins at just 30 centimeters high. These penguins stay close to home when they hunt, Cavallo says. That means observing what they eat could help researchers track changes in the local environment.

The traditional way of studying an animal’s diet is to examine its stomach contents or feces. “It’s usually some random assortment of body parts and mush that are pretty hard to identify,” says Travis Gerwing, an ecologist at the University of Victoria in British Columbia who wasn’t involved in the new study. Even if you can tell what you’re seeing, this method over-represents species with hard parts such as shells, bones, or beaks. Soft, squishy prey are more likely to disappear entirely in the digestive process, Gerwing says.

So, instead, Cavallo and her coauthors used a newer technology called DNA metabarcoding. They collected hundreds of scat samples from little penguin nests at two breeding sites in southeastern Australia. Then they targeted and sequenced certain short segments of DNA within the feces. These genetic snapshots told them what kinds of life forms had passed through the penguins’ guts.

Most of the penguins’ diet appeared to be fish, but the researchers also found gelatinous animals in 75 percent of the samples. The DNA of these animals made up almost a quarter of the total prey DNA in the study. Some of them weren’t known to be penguin food. “We were expecting to find gelatinous prey in the diet, but the prevalence of salps was a surprise,” Cavallo says. 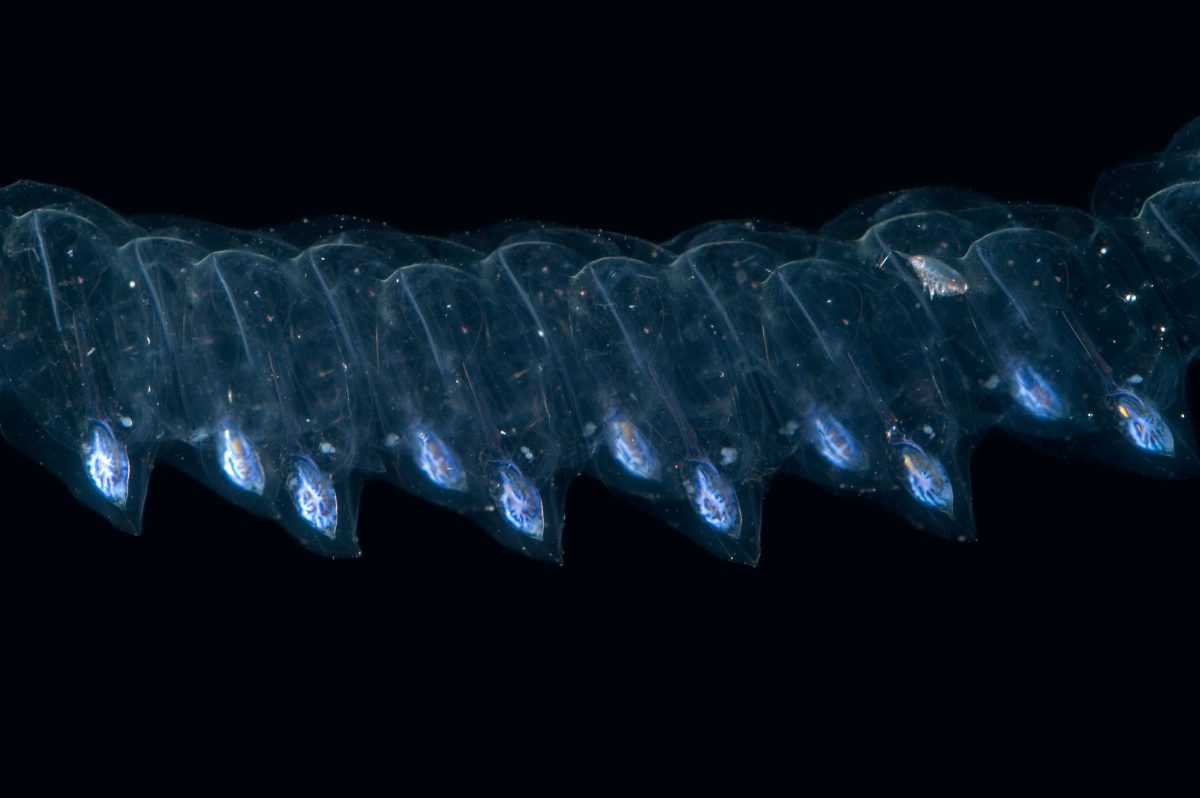 This salp, Thalia democratica, often grows in great swarms, and in the Tasman Sea it has reached densities of up to 1,312 individuals per cubic meter. Photo by David Shale/Minden Pictures

DNA metabarcoding is an imperfect tool though, notes Gerwing. “It’s an amazingly powerful technique. That’s actually one of its problems,” he says. It can pick up the genetic signature of not just the little penguin’s prey, but also the prey’s prey—whatever was in the belly of a fish the penguin swallowed, for instance, so long as that DNA survives being digested twice. Cavallo says that’s unlikely to dramatically change her results, however, and knowing what the penguins’ prey were eating is also valuable information.

Cavallo thinks little penguin diets can help researchers study climate change. For example, salps and jellies are expected to fare better than others in a warming, acidifying ocean, and their abundance might be reflected in penguin poop.

In an earlier study, Jean-Baptiste Thiebot of the National Institute of Polar Research in Japan and his colleagues attached video cameras to little penguins and three other penguin species and saw them all eat jellyfish. But evidence for penguins eating gelatinous herbivores like salps has been more limited, Thiebot says.

Thiebot wonders whether salps are a favorite food item for little penguins year round or just in the summer when salps are more abundant. He also thinks it would be interesting to know if their diets change over time. “Do younger individuals tend to try those more? Or less?” Perhaps age and hunting experience will affect a penguin’s taste for jellies.