A proposal to build the United States’ largest oil-by-rail terminal in Vancouver, Washington, could transform the Columbia River into a major conduit for fossil fuel. The facility would accept trainloads of crude oil from the Bakken region of North Dakota, and transfer it to ships bound for West Coast refineries. In the process, it would more than double the number of oil tankers and barges traveling through the Columbia River and into the ocean across the Columbia River Bar, a treacherous patch of sea known to sailors as the Graveyard of the Pacific.

For the past five weeks, Washington state authorities have listened to arguments for and against Vancouver Energy’s proposed terminal at a series of hearings, which concluded last week. The public debate has centered on the dangers of oil trains—a threat highlighted by the fiery derailment of 16 cars in the Columbia River Gorge earlier this summer. But the potential risks of shipping have attracted less attention, says Dan Serres, the conservation director at Columbia Riverkeeper, one of the environmental organizations fighting to block the terminal.

If the new facility is built, it’s estimated that one oil tanker would visit the terminal every day, traveling more than 170 kilometers upriver to Vancouver. The vessel would also have to navigate one of the most dangerous bar crossings in the world, where the swift current of the Columbia collides with the Pacific. The chaos creates the shifting maelstrom of shoals, currents, and towering breakers known as the Columbia River Bar. 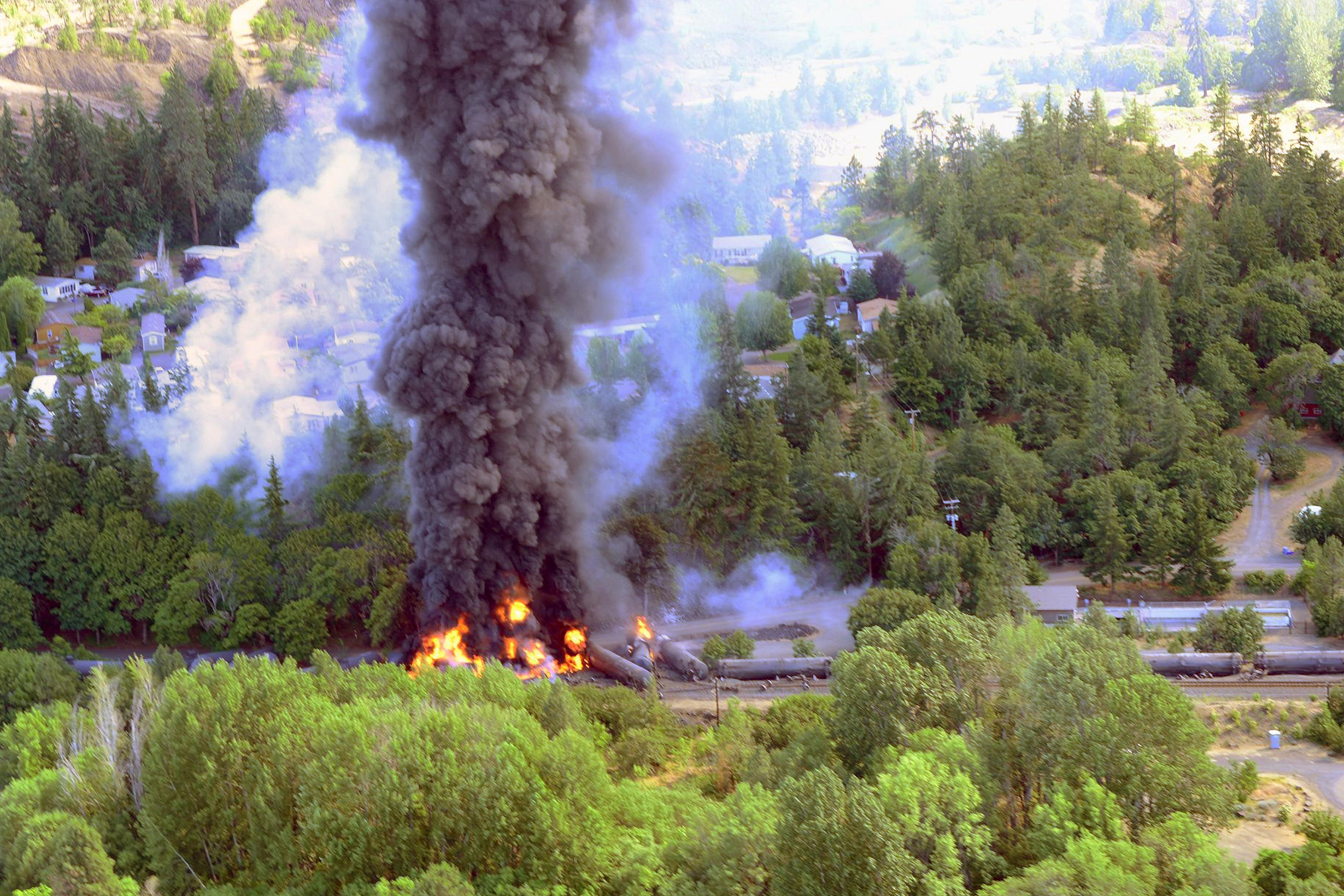 In the US Pacific Northwest, the dangers of shipping oil by rail are top of mind following the derailment of a tanker train in Mosier, Oregon, earlier this summer. Photo by US Coast Guard Photo/Alamy Stock Photo

Since 1792, the bar has claimed at least 2,000 ships, and the United States Coast Guard regularly closes it to traffic due to hazardous conditions. “Putting those two things together—a dangerous bar and dramatically increased shipments of oil—should give everyone pause,” Serres says.

A spill from a vessel could release up to 30 million liters (nearly 200,000 barrels) of oil, according to the project’s draft environmental impact statement. If an accident happened on the bar, the turbulent water could make recovering oil challenging, and would pose a risk to coastal beaches, experts say. If a spill happened in the river, it could also threaten the Columbia River estuary, home to a rich ecosystem of birds, pinnipeds like sea lions and seals, and salmon.

A report commissioned by the Washington Attorney General’s Counsel for the Environment, which represented the public’s interest in the hearings, found that such a disaster could cause between US $170-million and $1.16-billion in damages, and would require decades of recovery.

Throughout the hearings, the backers of the project—a joint venture by Tesoro Corp. and Savage Companies—have said they can operate the terminal safely. “Our interests are completely aligned with making sure that the delivery to and from the project is safe and done in an environmentally responsible way,” says Jared Larrabee, general manager of the project.

At the terminal, these efforts would include deploying oil booms before filling vessels to catch any oil spilled during loading, and installing safety shutoff valves on hoses. Larrabee says Vancouver Energy would also demand that oil tankers—operated by the terminal’s customers—follow procedures, such as using tugboat escorts, as well as the services of specialized river and bar pilots, who would come aboard to help vessels safely navigate the shipping channels and crossing.

It’s thanks largely to the skills of these experienced pilots that the river is as safe as it is today, says Laura Springer, the waterways management branch chief for the coast guard in Portland. After all, the Columbia is no stranger to vessel traffic. About 1,500 ships ply its waters every year, including roughly 300 tankers.

“We actually have a really good record of safety,” Springer says. The last major spill occurred in 1984, just downstream of Vancouver, when a steering failure caused a Mobiloil tanker to run aground, releasing nearly 750,000 liters (4,700 barrels) of heavy fuel oil. (Experts say tug escorts can help prevent accidents like this.) 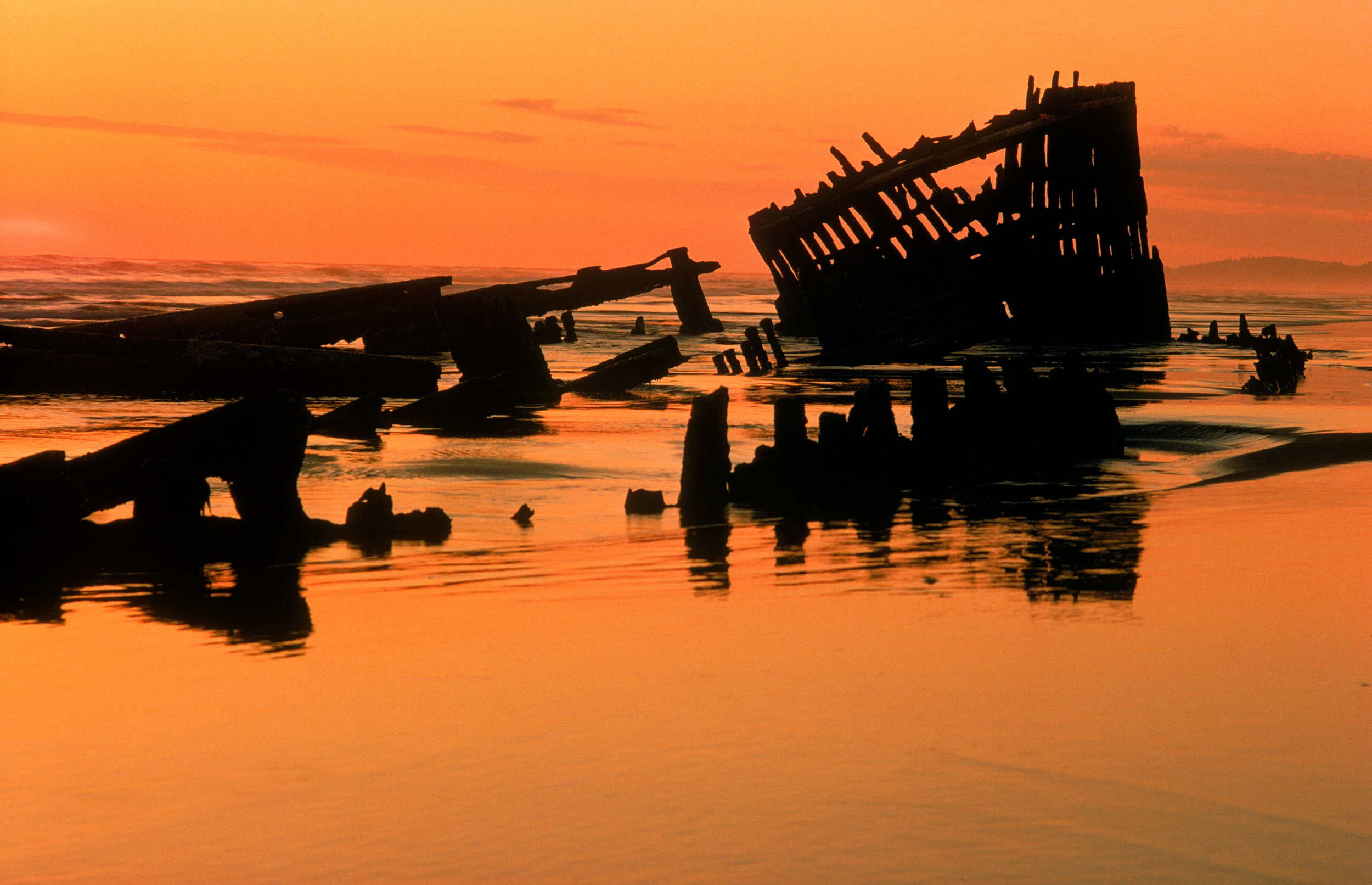 The mouth of the Columbia River—the Graveyard of the Pacific—is adorned by the wreck of the Peter Iredale. Photo by Chad Ehlers/Alamy Stock Photo

Based on historical shipping data, the draft environmental impact statement (compiled by the siting council and outside consultants) concludes that a small spill from a ship grounding or collision could happen about once every 20 years. A vessel traffic risk assessment commissioned by Vancouver Energy, which considers the effect of added congestion, found that a small tanker would be involved in a spill about once every 40 years and a large tanker about once every 3,000 years. (Washington’s Department of Ecology recently began an independent evaluation, but the preliminary results won’t be released until late 2017.)

However, the risk of a spill isn’t just about probability, says Kristin Boyles, the Earthjustice attorney representing Columbia Riverkeeper and other environmental groups—it’s also about consequences: and the consequences could be disastrous, according to some of the scientists who testified at the hearings.

James Holmes, an environmental scientist who helped compile the report for Washington’s Counsel for the Environment, found that a worst-case scenario spill could affect up to 130,000 adult salmon, 1.6 million juveniles, and 65,000 waterfowl. It could also contaminate more than 400 square kilometers of habitat, including wildlife refuges and wetlands that have been restored in recent years to boost salmon populations. The impact on tribal fisheries and culture would be devastating, says Sarah Thompson of the Columbia River Inter-Tribal Fish Commission.

Business groups and the Port of Vancouver have voiced support for the terminal, and a 2015 survey of Clark County residents found that two-thirds approved of the project. However, many have also come out against it, including the Washington Department of Natural Resources, the Vancouver city council—which recently passed a resolution to ban all future oil terminals—and citizens who submitted nearly a quarter million comments in response to the draft environmental impact statement, citing the danger posed to the river and to the climate.

On Friday, Washington’s attorney general, Bob Ferguson, joined the opposition. “The bottom line is that the potential benefits of this project are dramatically outweighed by the potential risks and costs of a spill,” he said in a statement.

With the hearings over, the state’s Energy Facility Site Evaluation Council will now pore over the reams of submitted testimony and make a recommendation to Washington’s governor, Jay Inslee, who has final say over the terminal’s fate.

The decision will determine whether the Graveyard of the Pacific becomes the Gateway to the Pacific.