On William Barents’s second Arctic expedition in 1595, the Dutch navigator’s crew had a deadly encounter. While searching for diamonds on an islet near Russia’s Vaygach Island three months into the journey, two of his sailors were resting in a wind-protected depression when “a great leane beare came sodainly stealing out, and caught one of them fast by the necke.” The bear killed and devoured both men, despite the crew’s attempt to drive the animal away The incident, recounted in Dutch officer Gerrit de Veer’s diary, became the first account of a polar bear attacking humans in recorded history.

More than 400 years later, humans now live and work in the Arctic in unprecedented numbers. At the same time, as sea ice diminishes in the Arctic Ocean, polar bears are spending more time on land. This change in behavior has wildlife managers worried that attacks could become more common in the far reaches of the North. No one, however, had been tracking the clashes between polar bears and humans.

So, in 2009, following reports from northern communities that bears were spending more time near towns and showing aggressive behavior, the five nations with polar bear populations issued a directive to create a record of human-bear conflicts. Wildlife managers in Canada, Greenland, Norway, Russia, and the United States produced a digital database that tracked injurious or fatal attacks between 1870 and 2014. Their goal was to reveal trends that could help prevent future injuries.

Once the Polar Bear-Human Information Management System (PBHIMS) was complete, researchers analyzed the 73 confirmed historical attacks in which 20 people were killed and 63 injured to see if the circumstances of attacks were changing by decade. They found that nutritionally stressed adult male polar bears were the mostly likely to attack, while defensive attacks by females to protect cubs were rare. The majority of attacks happened at field camps and in towns—a departure from the majority of grizzly and black bear attacks that occur in wilderness areas. And in 38 percent of attacks, human food attractants were present. No attacks occurred near natural attractants, such as whale bone piles. 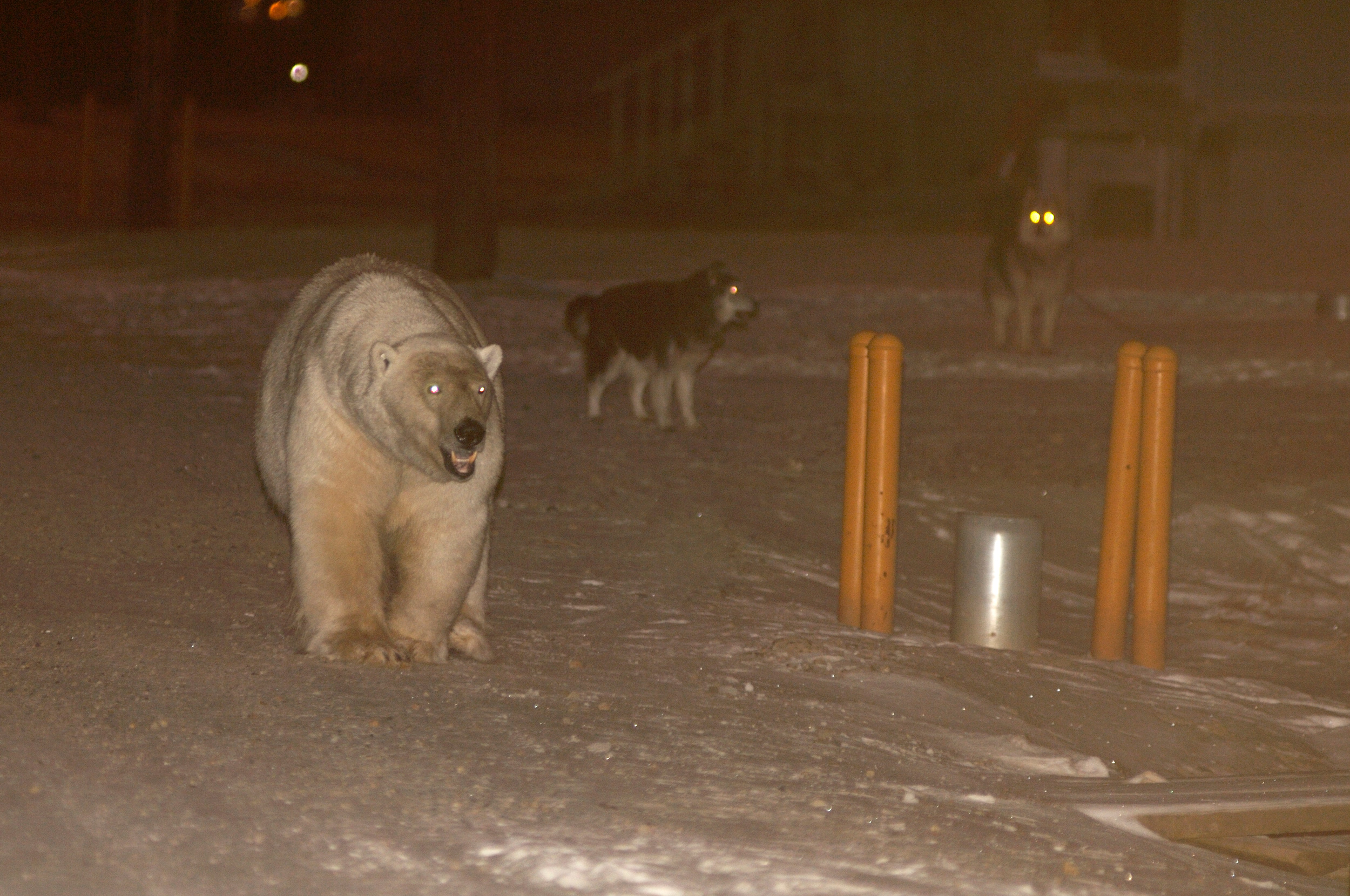 Not the neighbor you want to see walking down your street. In Kaktovik, Alaska, and other Arctic towns where polar bears are becoming more common visitors, communities often set up patrols to mitigate potential conflicts with humans. Photo by Steven Kazlowski/Minden Pictures

“The concern is that this is something that will only continue to increase,” says Todd Atwood, a United States Geological Survey wildlife biologist and coauthor of the study that appeared in Wildlife Society Bulletin this month. “The conditions are ripe for human-bear conflict.” In addition to a growing open water season forcing polar bears ashore for longer durations, declining sea ice has also opened up the Arctic to more recreational and industrial human activity, including oil and gas development.

When Atwood and his colleagues looked at whether attacks were increasing or decreasing between 1960 and 2009, no clear trend emerged. But between 2010 and 2014, when the extent of sea ice reached record lows, the greatest number of attacks took place. Moreover, since 2000, 88 percent of attacks have occurred between July and December, when sea ice is at its lowest.

Atwood hopes that wildlife managers in Arctic communities will use this information to determine conflict hotspots and develop plans to keep bears and people safe. University of Alberta polar bear researcher Andrew Derocher, who is unaffiliated with the study, says the PBHIMS provides much needed data.

“There’s been a real deficit of information,” Derocher says. Though wildlife managers suspected attacks were increasing, there was no way to know how often and where the events were taking place, or what could be done to prevent them.

Given the results of the study, mitigation might include better management of human food attractants, such as garbage, meat caches, and harvested animals, and implementing additional patrol teams to monitor and haze bears near towns. Going forward, countries are expected to document all future attacks in the database.

“It’s a useful contribution,” Derocher says. “Most governments already have these sorts of systems in place [for other animals]—if you look at black bears and grizzly bears, we track those quite well. Polar bears have been lost out in the wilderness because they’re so far away and the incidents are fairly infrequent, but when they occur they’re quite sensational.”

With the populated database, wildlife managers will be able to turn to science, not stories, to help prevent future attacks.