The talitrid amphipod (Orchestia grillus) turns from brown to fluorescent orange when infected with the parasite Levinseniella byrdi. Photo by David Samuel Johnson

The drama playing out in a New England estuary has all the makings of a Hollywood thriller: unwitting characters carrying out pleasant lives against a bucolic backdrop of branched waterways and rustling grasses when—suddenly!—they’re overtaken by a potent parasite. They turn pumpkin orange and wander away from shelter in zombie-like confusion. Eventually, they’re gobbled whole by winged monsters.

Yet unlike the movies, this story is very real. Talitrid amphipods, also known as marsh hoppers, in Massachusett’s Plum Island Estuary, are afflicted by Levinseniella byrdi. And the parasite—flourishing under rampant pollution—causes its victims’ descent into the scuttling undead.

First, it turns the brown crustaceans, which resemble shrimp the size of black beans, bright orange through a chemical reaction. The orange exoskeleton is “like a neon sign that says, ‘Eat me!’” says David Samuel Johnson, a marine ecologist at the Virginia Institute of Marine Science. Then, the parasite changes the amphipod’s behavior, likely by affecting its sensitivity to light. With its instincts scrambled, an infected marsh hopper will stumble out of cover and into the danger zone, “like a drunk who wanders into traffic,” says Johnson, where a hungry bird is likely to spot it.

“They’re not aware the danger is there,” he adds.

Zombies are surprisingly common in nature. There’s a parasitic fungus, for instance, that causes an ant to march away from its colony, climb a leaf or blade of grass, clamp onto the end, and then die so its dangling body can rain spores onto other potential victims. There’s a parasitic larva of a wasp that manipulates its spider host to turn its web into a cocoon. And in Japan, a nematomorph parasite sends crickets and grasshoppers on suicide missions, causing them to leap into the water where hungry trout lurk. The list goes on—each an example of the intricate ways parasites manipulate their hosts to complete their own reproductive life cycles.

Yet there’s something different about the parasite surge in the Plum Island Estuary: it was caused by scientists.

For more than a decade, researchers with the TIDE Project have used the estuary as a large-scale experimental site. To mimic the effects of sewage and agricultural runoff, they dumped fertilizer into marsh tidal creeks and have been studying the consequences on the ecosystem. 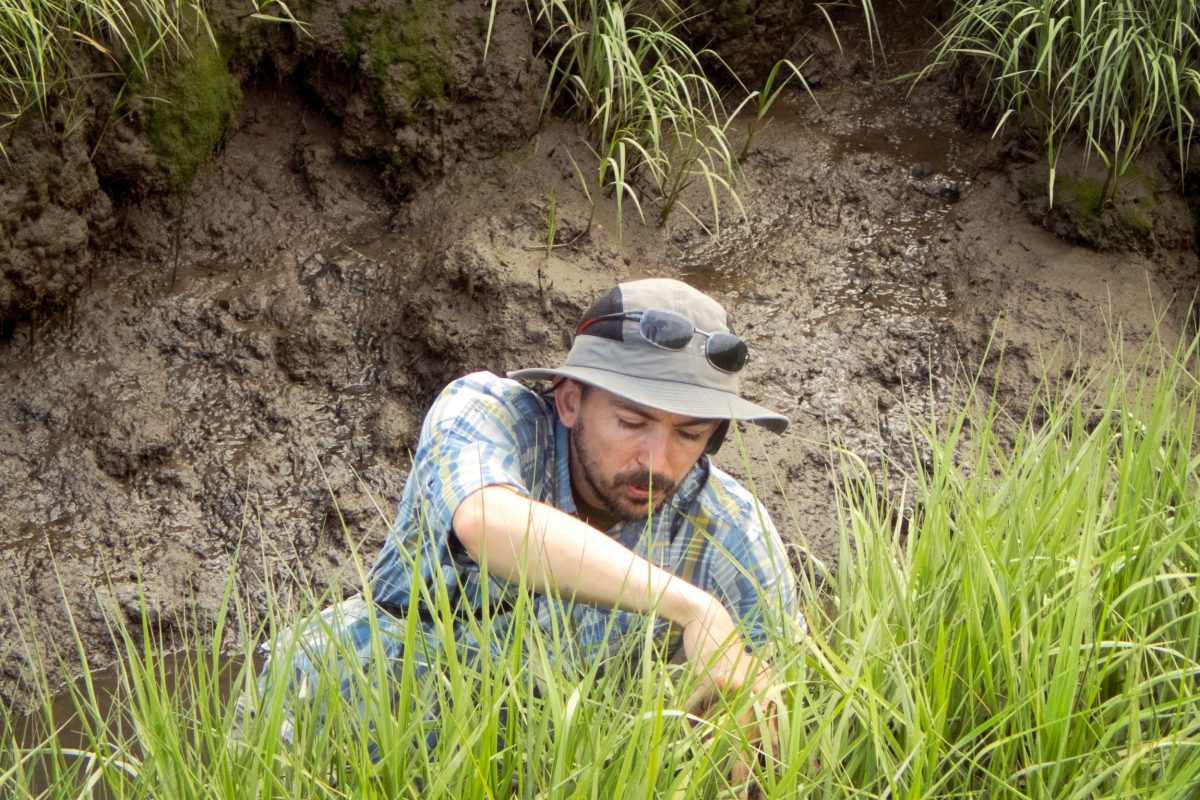 Marine ecologist David Samuel Johnson has been studying amphipods—among other creatures—in Massachusetts’s Plum Island Estuary for over a decade. Photo by Shanna Baker

Since 2009, Johnson has documented how amphipods reacted to the pollution. At first, marsh hopper populations in the test areas were comparable to those in stretches of the estuary that had not been dosed with excess fertilizer. But after a few years of surplus nitrogen, the number of marsh hoppers—and the prevalence of the parasite—in the test marshes spiked.

Like all good thrillers, there’s a cautionary note embedded in the results.

Kevin Lafferty, a parasite ecologist with the US Geological Survey who was not involved in the Plum Island Estuary experiments, says the findings align with a growing body of research that shows how human pollution—specifically, the introduction of nutrients like nitrogen—can lead to an increase in parasites.

Levinseniella byrdi has no effect on human health, but could be an analog for those parasites that do, says Johnson: malaria, for example, transmitted by mosquitos, which are associated with aquatic ecosystems.

It’s reasonable to speculate, Lafferty says, that “infectious processes [will] increase when you add resources to a system.”

As Johnson notes: “If we’re taking measures to control disease, one of the measures might be to limit the amount of nutrient pollution we have going into these ecosystems.”

Scientists with the TIDE Project stopped adding fertilizer to the Plum Island Estuary in 2016. Now, Johnson will be watching closely to see if the zombie amphipod uprising is over.