Abandoned train tracks come to an end at the shore of San Francisco Bay, where a burnt-out, collapsing warehouse extends over the greenish-brown water. Beside the derelict loading dock is a small public pier about 30 meters long. Most days, a fisher or two may be found here, quietly waiting, lines in the water.

On this rainy January morning, however, the Ferry Point pier in Richmond, just a few kilometers east of the Golden Gate Bridge, has drawn a circus of activity. Sea lions are barking, gulls are squawking, and about two dozen men, women, and children are cheering as they fill buckets with small fish. From behind the wooden railing of the pier, circular spiderwebs of nylon go flying. They open like parachutes before landing on the water. A man in rain gear leans over the railing and hauls in his net, now filled with wriggling slivers of silver. He shakes out a dozen Pacific herring into his 24-liter cooler, and throws the net again.

In the nearby parking lot, more fishers are unloading their gear. A commercial gill net boat moves into the cove. Sea lions bawl. Word is out: the herring are in. 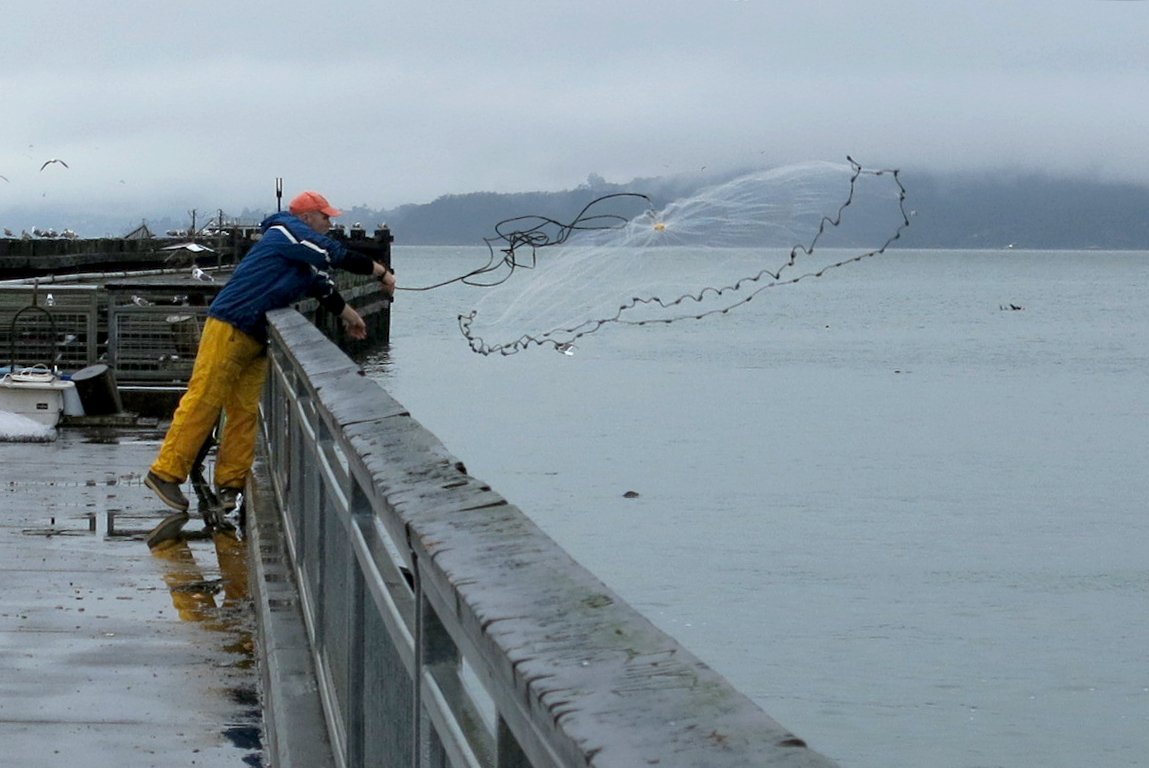 The fish are spawning as they do each winter in West Coast estuaries. The females lay their eggs on rocks, pier pilings, and kelp, and the males turn the water milky blue with sperm. Fish, birds, and sea lions feast, and commercial and recreational fishers cast their nets.

In the past few years, the recreational herring fishery has been gaining popularity along piers and breakwaters in San Francisco Bay. And with it has come a resurgence in the ancient art of cast netting. There are other ways to catch herring. The fish bite small artificial flies, for example. But only cast nets allow recreational fishers to haul in enough of the small fish to make the effort worthwhile.

A cast net is a fine woven mesh with a rope attached to the center. Cultures around the world have relied on cast nets for millennia. There are references in the Bible, for instance, of nets being cast over fish in the Sea of Galilee. When pulled, the rope cinches the weighted perimeter of the net to create a nifty sack that is still as effective today as it was in the hands of Polynesian canoeists and Mediterranean sailors. 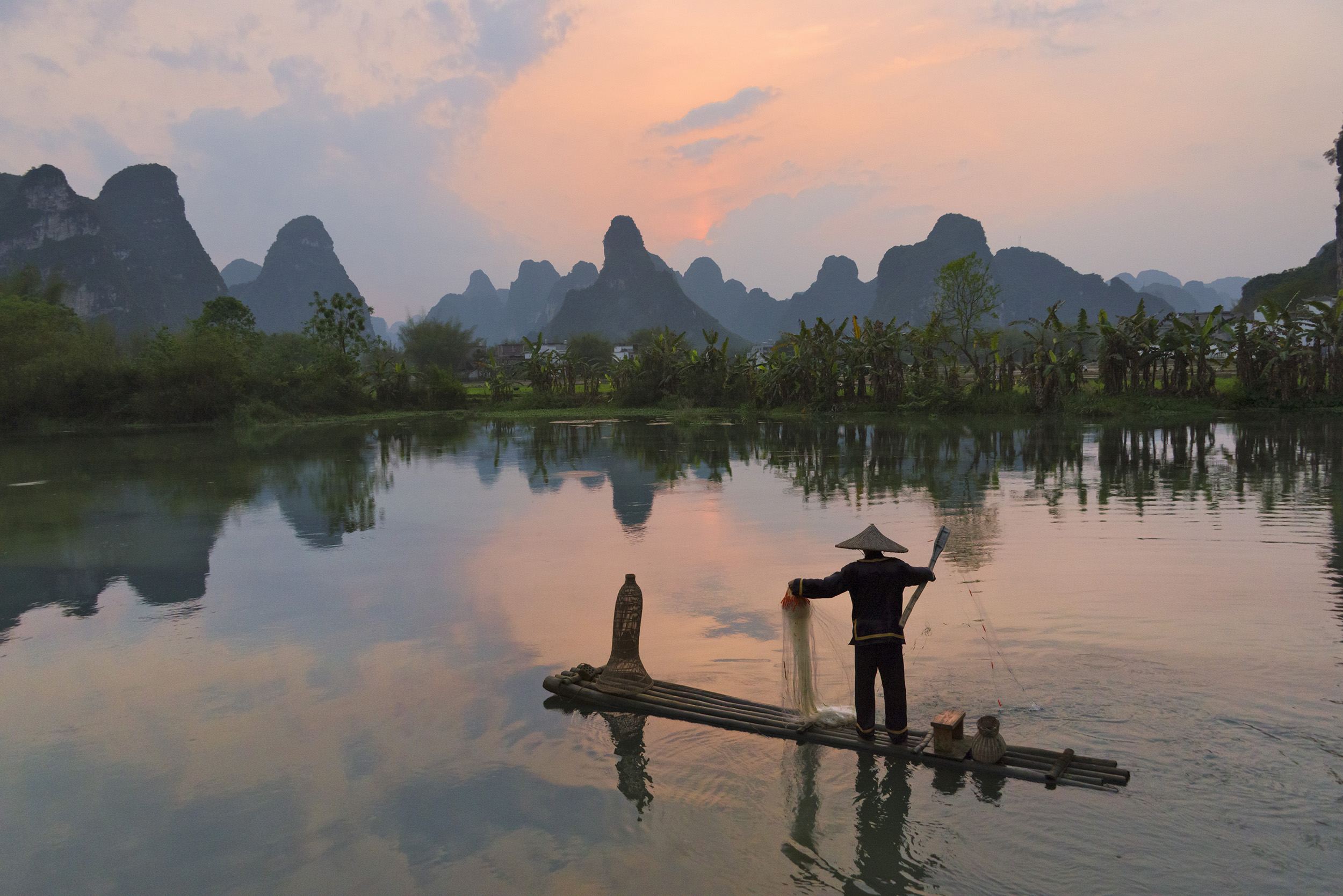 Cast nets are a low cost and highly effective way to catch small fish, and are used all over the world. Photo by Keren Su/Corbis

Nathan Lee was in high school when he first learned about San Francisco Bay’s herring runs—of how a fisher standing on the shore could throw a small net for several hours and catch 50 kilograms of fish. But it was only a few years ago that Lee, now 43, bought a net and began chasing reports of the fish. Many times, Lee says, he arrived just hours too late, the rocks and kelp covered with sticky, pearl-like eggs, but the herring themselves gone.

“This is the first year we finally got them,” says Lee, who, with his 11-year-old daughter, Maya, took home about 20 kilograms of fish one day in January. They pickled, fried, and smoked their catch.

Lee uses a net that’s more than three meters wide, while Maya and her nine-year-old sister, Maddie, have been practicing on their lawn with a half-sized net.

The San Francisco Bay herring spawns have only recently gained in mainstream popularity. However, a small population of fishers—especially migrants from nations like China, Vietnam, and the Philippines—has been targeting herring for decades. Many of these people subsist in large part on local fish populations, and each winter when the herring are in, they catch enough in just several outings to last them through the year.

Now, as the recreational herring fishing scene in San Francisco Bay grows, so too does the attention being paid to it by regulators. 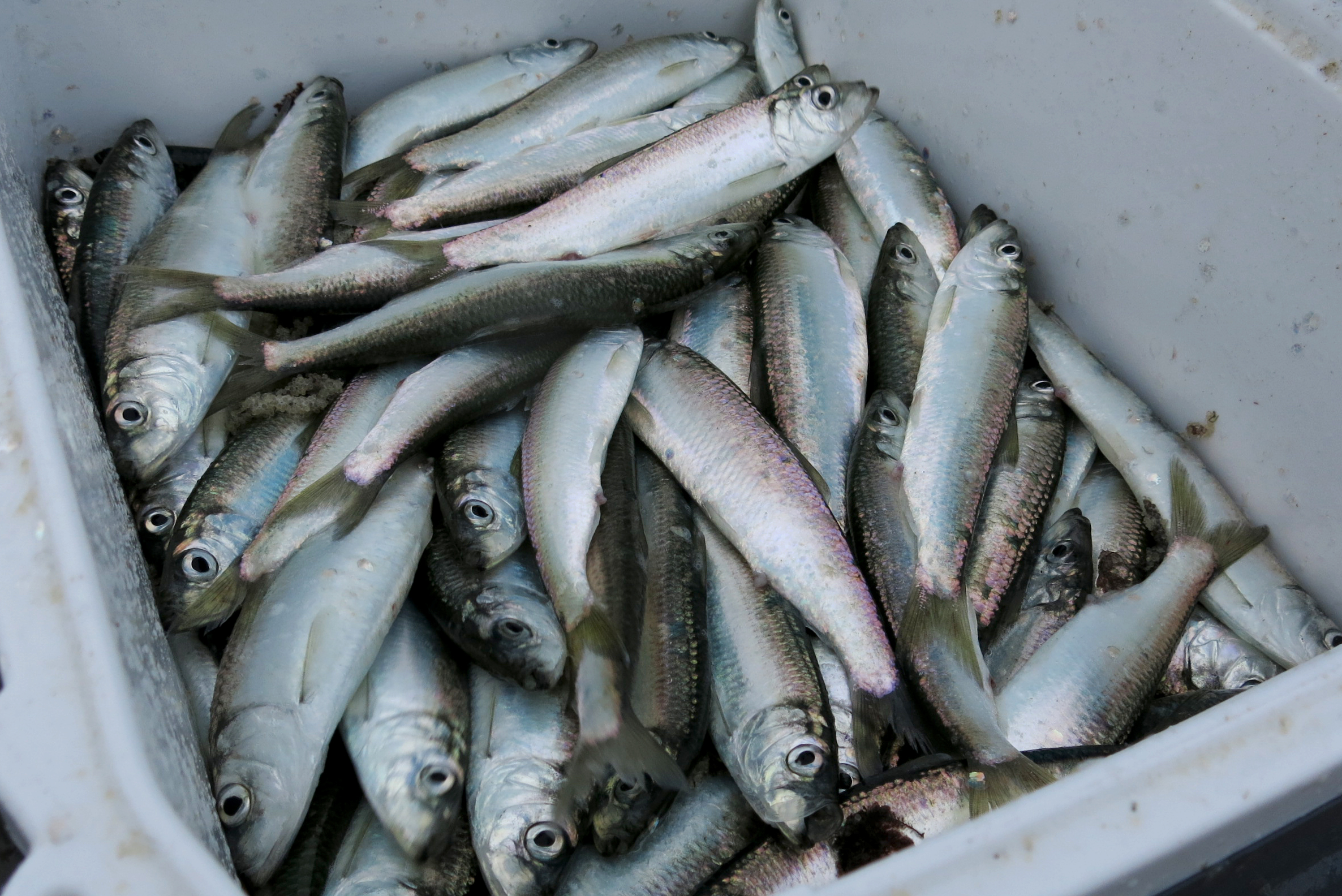 A cooler half full of herring caught from the Ferry Point pier. Photo by Alastair Bland

The herring population in San Francisco Bay is generally considered healthy, and the commercial fishery is closely regulated, says biologist Ryan Bartling, the California Department of Fish and Wildlife’s herring specialist. In a typical year, the commercial quota is set at around 2,000 tonnes. For reasons not fully understood, he says, 2015 saw a relatively low number of returning spawners. As a result, the 2016 commercial catch will be limited to 750 tonnes. The most valued part of the catch is the females’ roe, which is mostly exported to Asia.

For now, there is no limit on how much recreational fishers can catch, though most take no more than a few buckets full each season. The recreational catch is probably a fraction of the commercial catch, Bartling says. Still, the growth in the number of fishers targeting herring is drawing some scrutiny. Reports of a few fishers filling large garbage bins with hundreds of kilograms of herring has prompted discussions within Bartling’s department of enforcing a daily take limit beginning two years from now.

Even though the commercial quota has been reduced this year, Lee says he’s frustrated that a small recreational fishery could see tightened restrictions, while commercial fishers still fill their boats using gill nets and sell their catch abroad.

“If you’re worried about the resource, then limiting the recreational take isn’t going to have a lot of effect,” he says. He notes that fishers on the shore throwing nets can only physically access a fraction of the spawning herring. “But the commercial boats can probably reach 99 percent of the fish. They’re the ones taking real tonnage, and imposing a limit on us will be a joke.”