The Maldives hosts some of the world’s best surfing spots, but locals fear one such site is about to disappear as construction of a bridge gets underway. Photo by Scubazoo / Alamy Stock Photo

Over a dozen motorbike riders have pulled over on the side of Boduthakurufaanu Magu, Malé’s main road, to stare out on the Varunulaa Raalhugandu surf points. In the high wind, strong waves are breaking against the shore, misting their faces with spray. The waves are heavy with memory: local surfers have ridden them for generations. In recent years, foreigners too have flocked here, to the southeast coast of Malé, the uber-congested capital of the Maldives, to share in the waves’ tubular splendor.

But today, the throngs of surfers that once dotted the breaks have given way to rigs, cranes, pylons, and an unfinished bridge. There is little open space in Malé, and here, one of the last vestiges is being taken away.

Since construction on the bridge began in March, this long-popular surfing spot has been blocked from public use. For the many surfers who frequented Raalhugandu, this was as unexpected as it was devastating. Past surfing spots in the area were ruined by the construction of new harbors and land reclamation projects, and Raalhugandu was the fast-developing city’s last access point to the Maldives’ greatest natural resource: the sea. Now, without warning, it was closed off.

But one day in early March, the swells were too good for professional bodyboarders Ali Khushruwan and Ali Javeed to ignore. Khushruwan and Javeed surfed for three hours, and when they came ashore, a posse of officers took them to jail, where they stayed for 24 hours without charge. Since then, more than a dozen others have been arrested for surfing Raalhugandu or protesting its public closure.

Like most major infrastructure projects, the two kilometer-long, 20-meter high overpass, officially named the Chinese-Maldives Friendship Bridge, is being built to fulfill a worthy goal.

As of 2018, the bridge will connect Malé to its airport on neighboring Hulhulé Island. (Until then, as always, you’ll need a boat). It is one of the largest infrastructure project ever undertaken in the Maldives, and it comes with a correspondingly large US $210-million price tag, funded in part by the Chinese government.

Design for China-Maldives Friendship Bridge unveiled to the public. pic.twitter.com/GZyi7zLB3X

Malé is one of the most densely populated cities on Earth, with an estimated 18,400 people per square kilometer. Tokyo, by comparison, has just 4,400. With labyrinthine lanes, hordes of motorbikes, and narrow sidewalks, Malé is a city that would drive any claustrophobe shrieking into the reef.

A rising sea is threatening to sink the country’s smaller islands, and the government is scrambling to help 70 percent of its 400,000-plus population (presently spread across 188 islands) to relocate to the Greater Malé Area, a megalopolis that includes the nearby islands of Villingili and Hulhulé (aka “Airport Island”). The whole multi-island city will one day be connected by bridges. Building the Friendship Bridge is the first step.

Officials say the relocations will give islanders access to educational, economic, and medical opportunities that remain largely absent on rural atolls. Critics see it as a step toward leasing the soon-to-be-empty smaller isles to the highest bidder. 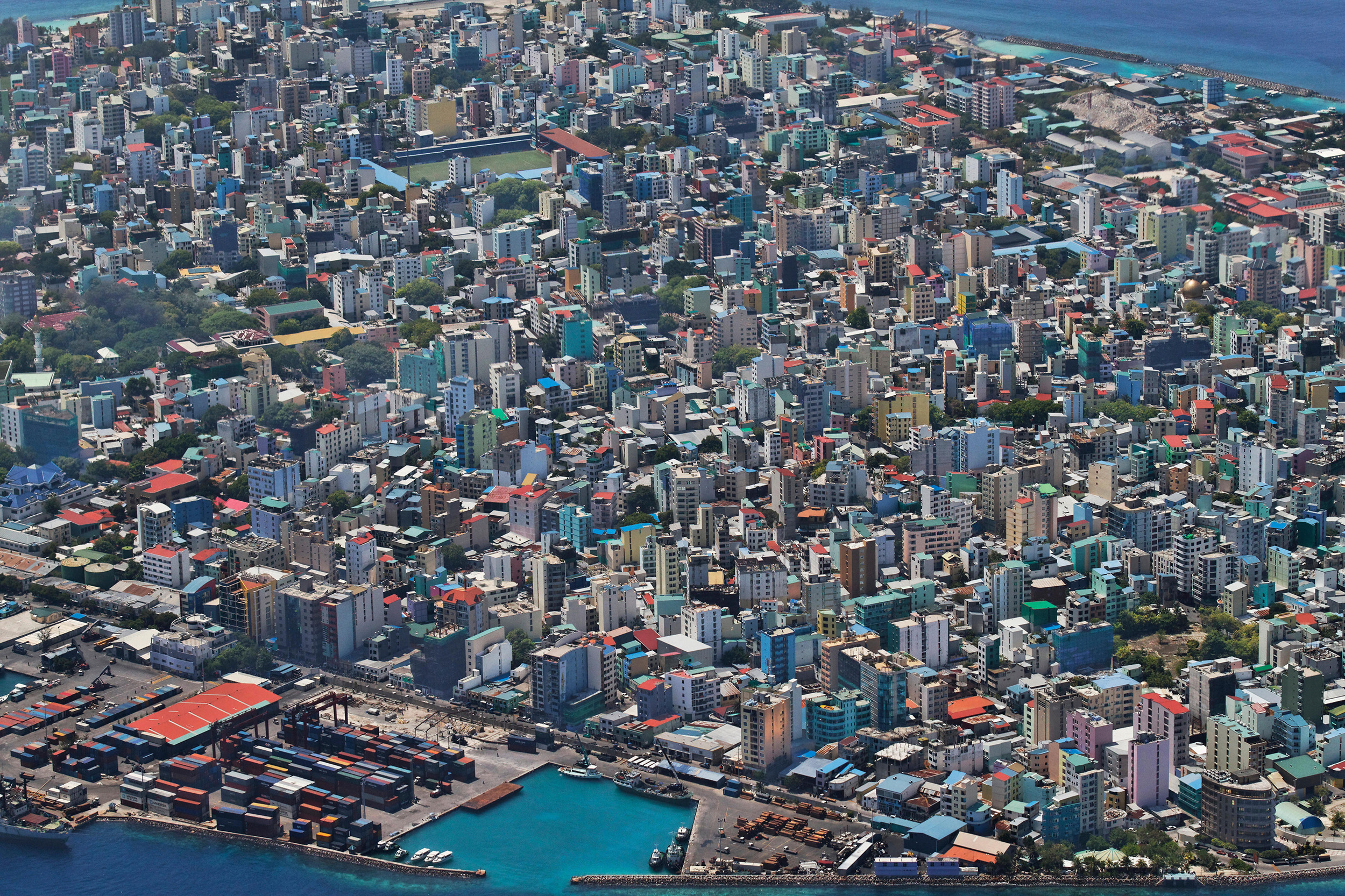 Malé is a small but incredibly dense island city—and it’s going to become even more populous in the near future. Photo Hemis / Alamy Stock Photo

Most surfers, like many Maldivians, are not against the bridge itself, only the closing of access to Raalhugandu. Surfers, led by national surfing and bodyboarding associations, have created a campaign called “Save Our Wave” to protest the public access ban. They’ve made a Facebook group, drafted petitions, held demonstrations, and penned op-eds. But the ban remains in force.

In April, the housing minister Mohamed Muizz announced that surfers would be able to return after the bridge was finished, adding that construction would not permanently damage Raalhugandu’s waves, but surfers remain skeptical.

“I don’t think they know what’s going to happen in the long run,” says Ahmed Arish, a nationally ranked bodyboarder and Save Our Wave activist who, like most surfers, distrusts government assurances and believes that the bridge will ruin the surf break. Looking out on Raalhugandu from a Malé café, Arish laments the dwindling access to the sea in the capital.

“We are the people who should get the benefits of living in such a beautiful place,” he says bitterly. It is a sentiment heard often in Malé: paradise is getting further and further away.

The closing of Raalhugandu transformed surfers into some of the bridge project’s most vocal critics, but they are not the only ones opposing aspects of the construction.

Before construction began, the Malé-based company CDE Consulting released a 417-page environmental impact assessment on the bridge, detailing a slate of anticipated environmental consequences. The surfers take umbrage with the report for not going far enough in criticizing the bridge, but some of its predicted consequences sound grim enough: “[P]otential impacts on reef slope geology due to vibrations and drilling” and “hydrodynamic changes in relation to tidal flow and wave height changes” are just two worrying excerpts.

The bottom line is this: nothing this large has ever been built upon a coral reef in the Maldives, and nobody is quite sure of the range of environmental effects it may have. 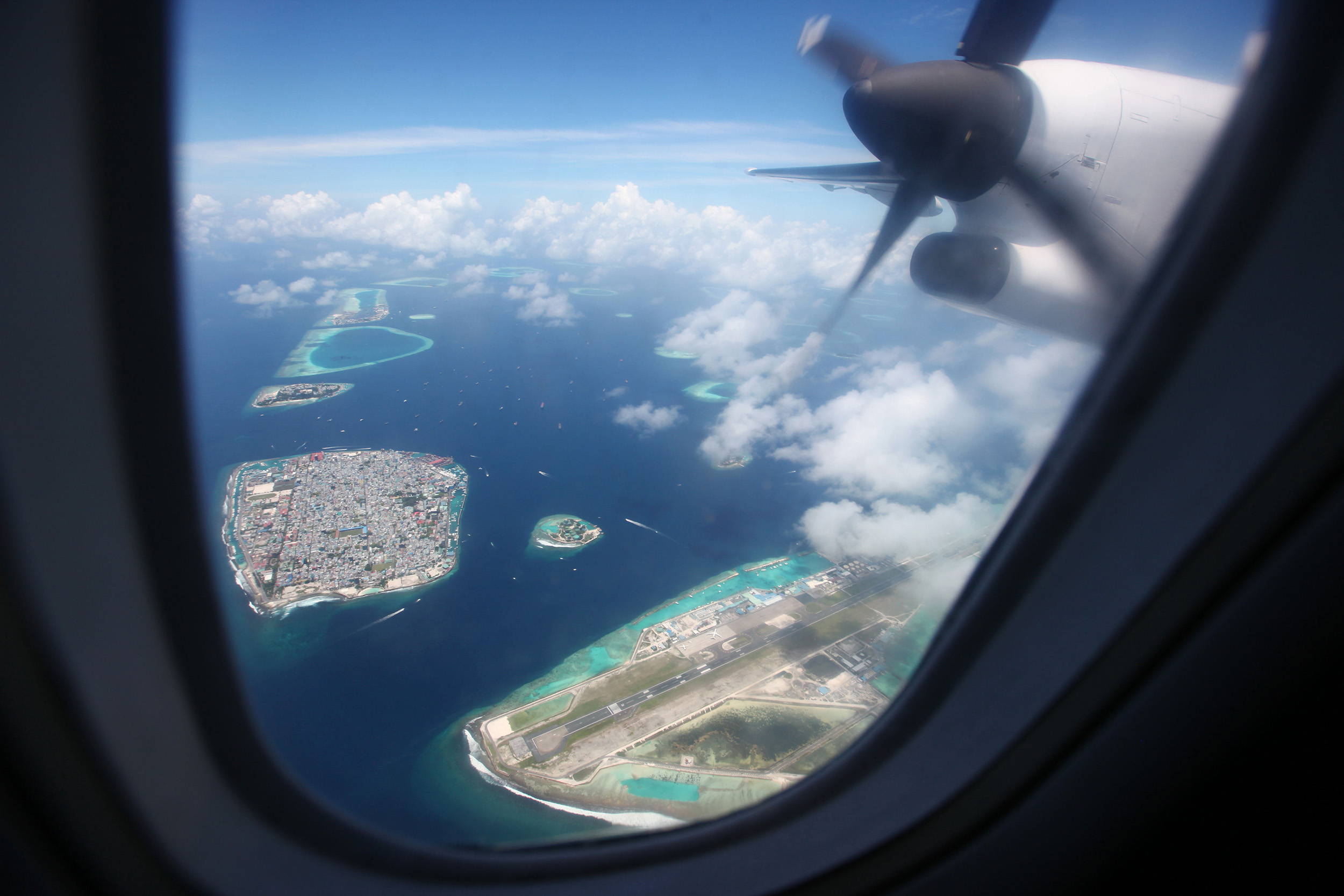 The view from an airplane window shows Malé and the airport on nearby Hulhulé Island. Photo by Peter Schatz / Alamy Stock Photo

The Chinese construction firm handling the project, CCCC Second Harbour Engineering Company, has also come under scrutiny. In 2009, the company was blacklisted by the World Bank over fraudulent practices, and critics doubt that they will seriously heed environmental concerns. In May, the firm sparked outrage when it was discovered that they had destroyed a nearby coral reef by storing steel pipes atop it.

Beyond that, many of the surfers and other Maldivians interviewed question the necessity of a bridge in a country with such a strong maritime history and a host of other pressing infrastructure needs.

“I think [the bridge] is insane, and utterly disrespectful of the beauty of the Maldives, the fragility of its environment, and its centuries old island culture,” says Azra Naseem, a Maldivian socio-political theorist and blogger, who has written extensively about the project.

One night at the construction site, Chinese project manager Lin Shukui described other frustrations associated with the bridge. Lin, who has built bridges from Chongqing to Macau, says that the fragility of the reef and heavy wave action make this the toughest project he has ever undertaken. “Diyu,” is how he describes it in Mandarin: hell.

Lin is wearing an off-white hardhat and standing at the base of an unfinished supply bridge leading out to the rigs. Behind him, men hold blue-flamed acetylene torches to a long stretch of metal piping. A cluster of massive pylons tower overhead, dwarfing the workers.

Beyond them stand the rigs, protruding from the water and, illuminated by powerful work lights, glowing like deformed lighthouses. Below, past Lin and his workers, the crashing of the waves is thunderous. But you can still hear the hammering from the nightworkers on the rigs. The sound carries clear across the water—tik tik tik—like the movements of a distant clock.