RangerBot is an autonomous underwater vehicle designed to identify and kill crown-of-thorns starfish by lethal injection. Photo courtesy of Queensland University of Technology

Australia’s Great Barrier Reef can’t catch a break: on top of contending with pollution, hurricanes, and back-to-back-to-back bouts of coral bleaching, the world’s most iconic reef is being eaten alive by millions of prickly, venomous sea stars known as crown-of-thorns starfish (COTS). But in a matchup befitting a sci-fi movie, scientists have developed a new robot to hunt and kill these sea stars—a murderous, autonomous underwater vehicle called RangerBot.

Since 2010, the population of native, coral-eating COTS has been booming, and the outbreak is plaguing the 2,300-kilometer-long Great Barrier Reef. RangerBot is being introduced to the reef—and to sea star nightmares—this week, in part to help with ongoing efforts to control COTS. This autonomous bounty hunter is the result of more than a decade’s worth of research and development by Queensland University of Technology (QUT) roboticist Matthew Dunbabin, backed by a US $750,000 grant from Google’s nonprofit arm.

COTS outbreaks have been a major cause of coral death for the struggling Great Barrier Reef. The booms appear to be caused by multiple factors: the sea stars are prolific and fast growing, agricultural runoff boosts food for their larvae, and humans have overfished the few predators willing to eat the venomous pincushions. Research suggests that getting this sea star explosion under control and preventing future spikes could help reverse coral declines on the Great Barrier Reef.

This is where Dunbabin saw a chance to apply his research in robotic vision. Back in 2005, Dunbabin developed a computerized system that could identify COTS with about 67 percent accuracy. But taking the next step and adapting the system to actually exterminate a sea star once it was spotted was a big challenge. Killing a COTS would have required injecting a toxic solution into every single one of a sea star’s roughly 20 arms. Miss a few and the animal could survive and regenerate. “That’s a big task even for a human and it was impossible for a robotic system,” says Dunbabin.

But in 2014 came a solution to that particular problem: the discovery that a single shot of a derivative of bile (the acidic digestive juice from gall bladders, most often from cows or sheep) could dispatch COTS quickly and completely. These bile salts cause tissue damage and a powerful immune response that kills the sea star in less than 20 hours. Dunbabin got to work building a robot based around this new one-shot injection system. The result was a torpedo-like robot called COTSbot. Advances in robotic vision and artificial intelligence meant the COTSbot could recognize COTS 99.4 percent of the time. 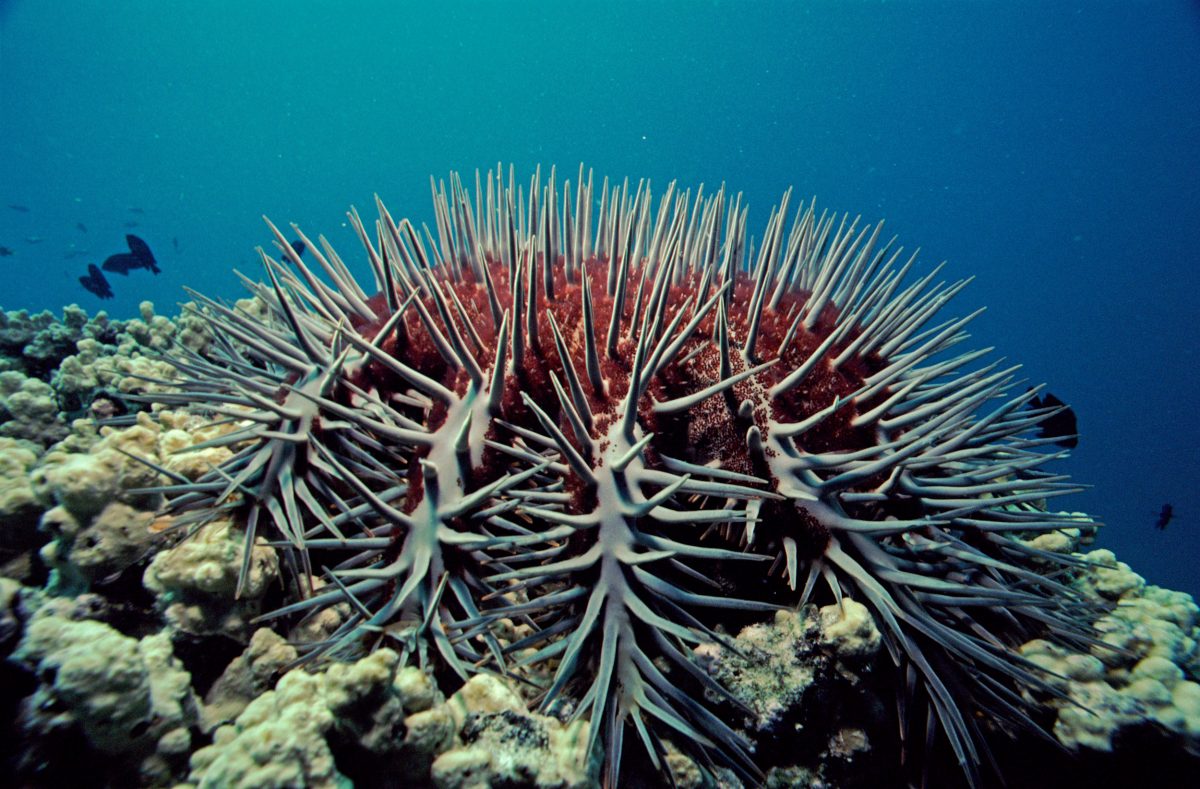 While COTSbot was a successful proof of concept, it had many limitations preventing its widespread use on the reef. The robot was big and expensive and could only be deployed by an expert. Dunbabin and his team envisioned a cheaper, smaller robot that was more versatile and easier to use—a vision they realized with RangerBot.

“The goal was to make it very intuitive, like how drones are today. You pick up a tablet, plan a bit of a mission, and press play,” says Dunbabin. Getting to this stage involved testing and refining the controls with lots of potential users, including students at more than a dozen regional high schools. They also fleshed out RangerBot’s kit, giving it water-quality sensors, lights, removable batteries, and an extra thruster so that it could gather water samples, operate at night and for longer periods, and maneuver in all directions.

Russ Babcock, who studies COTS management at Australia’s Commonwealth Scientific and Industrial Research Organization, is optimistic about RangerBot’s potential to expand sea star control efforts into deeper, less accessible waters and gather high-quality data on corals and sea stars to inform current management. “I believe these things have a place in the toolbox of marine ecologists, and we’re getting closer and closer to the day when mere marine ecologists like myself can operate one without getting a robotics jockey to come along. Bring it on,” he says.

Julia Davies, one of Dunbabin’s colleagues at QUT, helped test the user interface during RangerBot’s development. She compares RangerBot’s potential to that of a system of highway traffic cameras, which can provide swift notice of accidents and slowdowns.

More immediately, Dunbabin hopes his five operational RangerBots can provide early warning signs of COTS outbreaks across the Great Barrier Reef. However, he remains realistic about the RangerBots’ limitations. “They should be tools to extend our management programs,” not replace them, he says.