Maltese soldiers carry one of the few recovered bodies from the April 18 shipwreck as part of an interfaith burial service. Photo by Reuters/Darrin Zammit Lupi

On April 18 more than 800 people died when two boats collided in the Mediterranean Sea between Tunisia and Italy—the worst maritime disaster in the region in decades. Locked below decks in a smuggler’s fishing trawler, hundreds drowned when their would-be escort crashed into a merchant ship.

In the past year, smugglers have sent hundreds of thousands of African migrants onto the open sea for a harrowing crossing to Europe. Rampant poverty, war, religious persecution, and political instability have many Africans and Middle Easterners searching for safer shores. Though many migrants make the crossing safely, thousands have died. The migrant crisis is exposing a lot of cracks, including the flaws in a set of laws that was built atop an ancient honor code.

When on the open sea the threat of death always looms, and this harsh reality is the source of one of the oldest humanitarian codes: if you find people in distress at sea, you must save them if you can.

It’s a tradition that goes back centuries, if not millennia, says David Jardine-Smith, company secretary of the International Maritime Rescue Foundation. Though the origins of the code are “lost in the mists of time.”

“Throughout history and still today, particularly in the open sea, the only rescue possible is another ship in the area,” he says.

Over time, this informal sailors’ code has been chiseled into the formal laws in many nations. In 1982, the United Nations established the “duty to render assistance” as part of the United Nations Convention on the Law of the Sea. The law stands out because, in essence, it amounts to a legal right to be saved.

The law turns every ship in international waters—every fishing vessel, cargo ship, or cruise ship—into an obligatory savior whose failure to act is a legal offense. The only exception is government vessels, which, on principle, typically follow the code anyway. “Government vessels will definitely conduct search and rescue if they can,” says Jardine-Smith. “It’s just a legal get-out clause.”

The law has few exceptions. Vessel commanders must rescue and bring to shore distressed seafarers regardless of their race or religion, their nation of origin, or how they wound up at sea. And that’s where this ancient mariners’ code butts up against the Mediterranean migration crisis. Those who save imperiled migrants sometimes have nowhere to put them as they run up against European immigration policy. 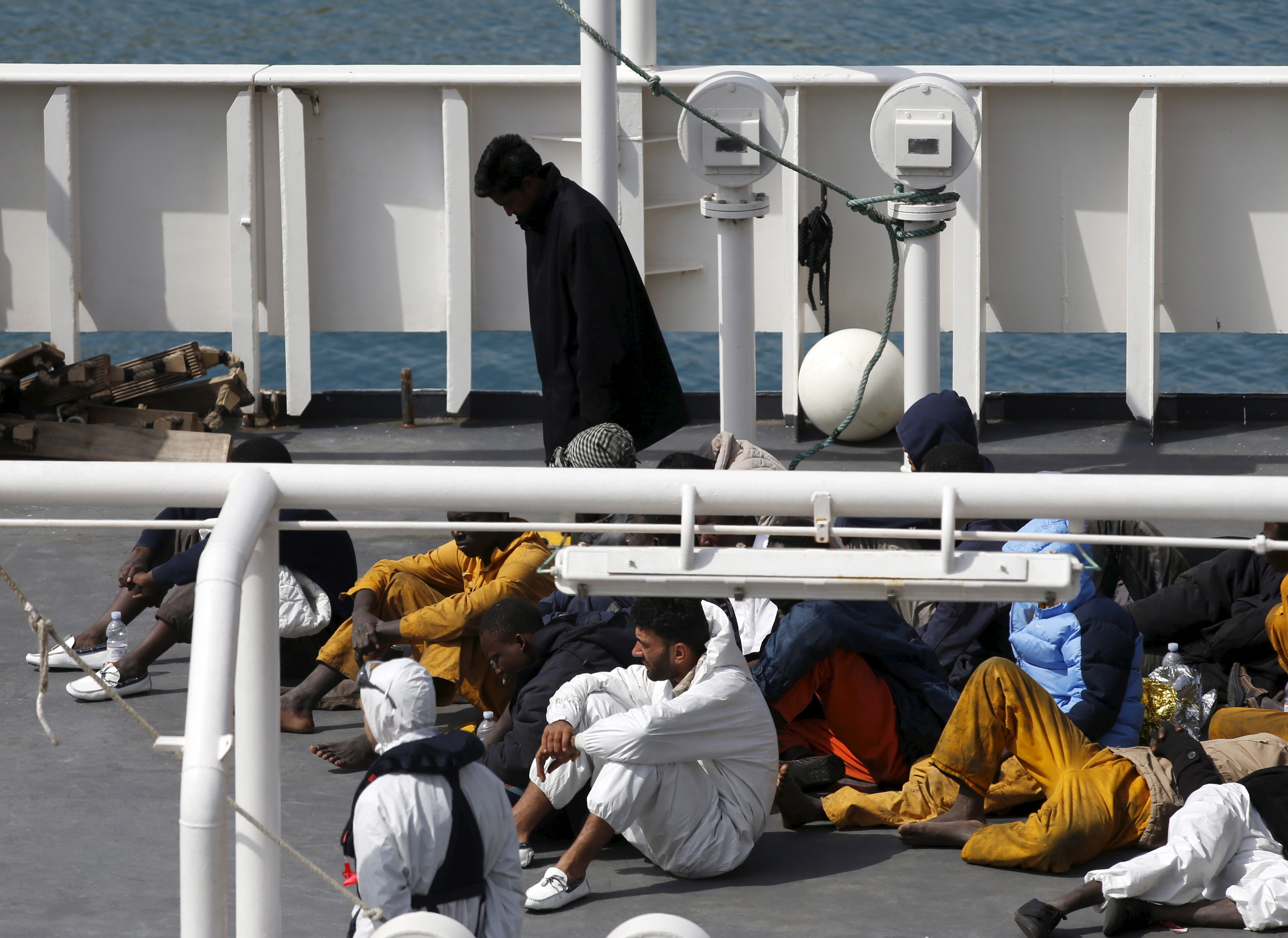 Survivors of the shipwreck that killed more than 800 people sit on the Italian Coast Guard ship Bruno Gregoretti. Photo by Reuters/Darrin Zammit Lupi

When the independent refugee rescue organization Cap Anamur saved 37 migrants in the Mediterranean and brought them to Italy, the rescuers found themselves under trial for aiding illegal immigration. In 2007, seven Tunisian fishermen rescued 44 migrants and brought them to Lampedusa, Italy’s southernmost island. The Tunisians were also prosecuted for their efforts.

While the rescuers were acquitted in both cases, the court proceedings endured for years. The Tunisian fishermen lost their boats and fishing licenses while the trial was underway, says Paolo Cuttitta, a sociologist who studies migration and border control. According to Cuttitta, the result is that private seafarers became more hesitant to honor the code when it came to migrants.

When tragedy again struck near the Italian island of Lampedusa on October 3, 2013, survivors claimed that “private vessels did not stop to assist them during the journey,” says Cuttitta by email. That wreck claimed more than 360 lives. “This was only one of the many occasions on which private seafarers reportedly turned a blind eye to migrants in distress.”

A week on the heels of the 2013 Lampedusa tragedy, a second deadly shipwreck spurred the Italian navy to launch a massive, yearlong search-and-rescue effort called Operation Mare Nostrum—Latin for “Our Sea.” The operation lasted from October 2013 to October 2014, and Italy credits it with bringing more than 150,000 desperate people in the Mediterranean to safety on European shores.

But when Italy upped its game, some smugglers took advantage. Several migrants brought to shore told Frontex, the European Union’s border agency, that the smugglers gave them no water, no food, and only 30 liters of fuel—not enough to make it to land. Why? Because they expected the Italians would find them within two days.

If smugglers are subjecting would-be migrants to extra risk, that may make rescue efforts seem self-defeating. But the numbers still suggest that Mare Nostrum was successful at saving people in the spirit of the age-old seafarers’ code.

Last week’s tragedy has brought the world’s gaze back to the Mediterranean, and there have already been calls to reinstate Mare Nostrum. But in Italy, there is also resistance: some Italians are wary of shouldering what they suggest is ultimately a European problem. The European Union is now responding with a pledge for more funding for a smaller operation, Triton.

Whether our current course can stem the rising death toll may not just shape the course of the Mediterranean migrant crisis, but the future of maritime humanitarianism.