A killer whale in Argentina charges a sea lion. This behavior, dubbed intentional stranding, has now been seen in killer whales in the northern hemisphere. Photo by Sylvain Cordier/NPL/Minden Pictures

Bigg’s, or transient, killer whales use stealth and teamwork to hunt their marine mammal prey. For a seal hightailing it from an attack, the best bet for survival is to get out of the water. But now, even dry land is not safe.

Demonstrating a dramatic behavior previously only observed in some killer whales in the southern hemisphere, Bigg’s killer whales in the Salish Sea have now been seen deliberately running aground to ambush prey. The behavior, witnessed at Protection Island, a national wildlife refuge near the mouth of Discovery Bay in Washington State, in August 2016, was described in a recent study.

“When the group made the first charge at the shallows, I just remember shouting and pointing,” says Justine Buckmaster, a naturalist with a Washington-based tour company who witnessed the incident. At first, Buckmaster says she was worried that the stranded whale had accidentally beached itself, but her concern quickly turned to excitement. “I realized I had just witnessed something really rare in our region,” she says.

That day, a group of five Bigg’s killer whales had homed in on the westernmost point of Protection Island, where harbor seals and their pups were hauled out on a cobble beach. Buckmaster watched as the group’s matriarch and a subadult male intentionally stranded themselves in the shallows. After that initial sortie, the subadult male made two more head-on charges at the shore, grounding itself on the beach. “His dorsal fin wobbled as he came to a full stop,” says Buckmaster. The killer whale needed powerful thrusts of its tail flukes to refloat itself, confirming that it was completely aground.

Josh McInnes, a biologist with the Transient Killer Whale Research Project and lead author of the study, says that the killer whales were able to scare the seal pups into the water where they were easy pickings. “The whales haven’t got to that stage in the development of this behavior where they can actually grab a seal off a beach,” he says. 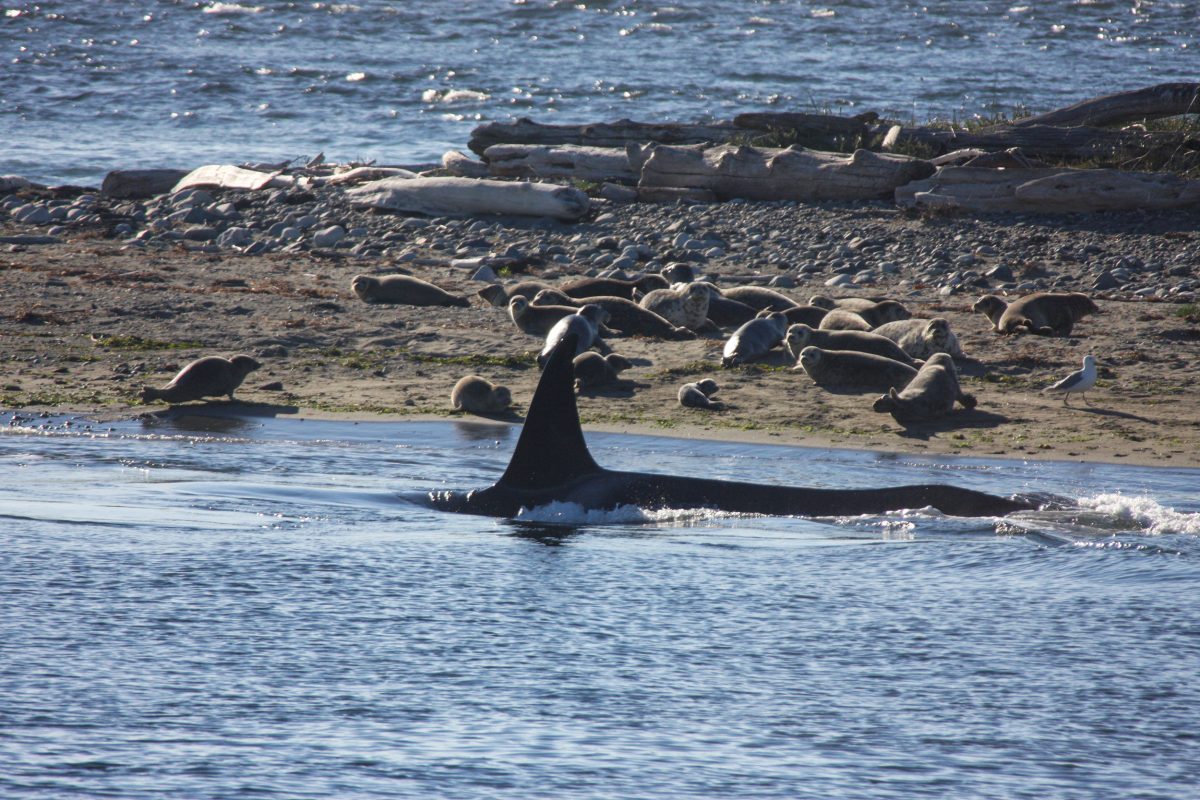 A subadult male Bigg’s killer whale intentionally strands itself in pursuit of harbor seals at a haulout on Protection Island in Washington State. Photo by Justine Buckmaster

Up until now, intentional stranding has only been documented at sites like the Valdes Peninsula in Patagonia, where a narrow break in a rocky reef allows killer whales access to a pebble beach, which sets the stage for intense hunting forays to snatch sea lions from the shallows.

McInnes says that intentional stranding likely developed opportunistically in the northern hemisphere mammal hunters, much as it did in southern hemisphere populations. “The killer whales haven’t interacted with or learned this behavior from a population of killer whales from South America; it’s more of an incidental behavioral trait,” he says.

According to John Ford, a whale researcher emeritus with Fisheries and Oceans Canada who has studied the region’s killer whales for more than four decades and was not involved in the study, it’s probable that Bigg’s killer whales regularly ground in shallow water while hunting seals in the area. “There have been a few occasions when members of the same population have become stranded high and dry on rocky shorelines, having no doubt done exactly the same thing, going in after seals,” he says.

The majority of seal haulouts in the Salish Sea are on rocky, exposed reefs that make killer whales’ brief shoreline incursions particularly dangerous. The sloping cobble beach on Protection Island provides a rare site where whales can employ this hunting tactic and safely slip back into deeper water.

However, the paucity of such suitable sites in the area means that it is improbable that this hunting tactic will proliferate throughout the population. “I don’t think it’s likely to be anything like it is in Patagonia,” says Ford. “If it was, we would expect the whales to hang out at that spot repeatedly to take advantage of the seals at that location—and I don’t think there’s any evidence of that.”

Nonetheless, the observation of this behavior demonstrates that Bigg’s killer whales are versatile, skillful predators and, like their cousins in the southern hemisphere, are comfortable in very shallow water. It seems that for Salish Sea seals, leisurely afternoon naps on the beach might be a thing of the past.