The ranch lands of Idaho may not be the first thing that pop to mind when picturing chinook salmon. Yet deep inland in Salmon, Idaho, ranchers and scientists have teamed up to save the area’s eponymous fish. Photo by Gregory Johnston/Alamy Stock Photo

Jude Trapani remembers his first glimpse of chinook salmon spawning 1,300 kilometers from the ocean, in Idaho’s Lemhi Valley. “It was magic,” he says. Historically, 10,000 chinook journeyed up the Columbia, Snake, and Salmon Rivers to spawn in the valley’s waterways. But by the time Trapani, a fish biologist with the federal Bureau of Land Management, arrived in 1991, it was magic that the scientist saw any fish at all—the number had slipped below 100.

The Idaho salmon share a ribbon of land along the Lemhi River with ranchers, who irrigate their hayfields with water from the river. In the early 1990s, the irrigation systems at times sucked dry a stretch of the Lemhi just outside Salmon, Idaho, cutting off the fish from their spawning grounds. To save the dwindling salmon, Trapani and other biologists turned to the ranchers for help.

“Salmon seem to have this pull on people,” Trapani says. “It wasn’t hard for ranchers to ask: ‘What can I do for salmon?’”

One thing that made it easier for Trapani was a local official who laid the groundwork. In the 1980s, before Trapani arrived in town, Bob Loucks, then a University of Idaho agricultural agent, urged stakeholders to come together. Loucks was one part of a small team that slogged through the long, unglamorous work of attending meeting after meeting to spread the word. Cooperation is why Salmon, Idaho still has salmon, and that success is a lesson for other communities hoping to rejuvenate local fish runs.

Loucks understood ranchers’ fears. If an animal is protected under the United States Endangered Species Act (ESA), farming and ranching businesses can be affected. To get ahead of potential strife, Loucks urged ranchers to develop a plan to share water with the fish.

By the time the federal government listed Lemhi River chinook as threatened under the ESA in 1992, the plan Loucks and the ranchers wrote was ready to go. The plan in their back pocket helped propel the valley to the head of the line for federal salmon recovery funding. That year, the Upper Salmon Basin Watershed Project (USBWP) was founded.

In 1994, a drought hit. A stretch of the Lemhi River went dry and returning chinook found themselves trapped downstream. The people needed to act fast to save the fish. 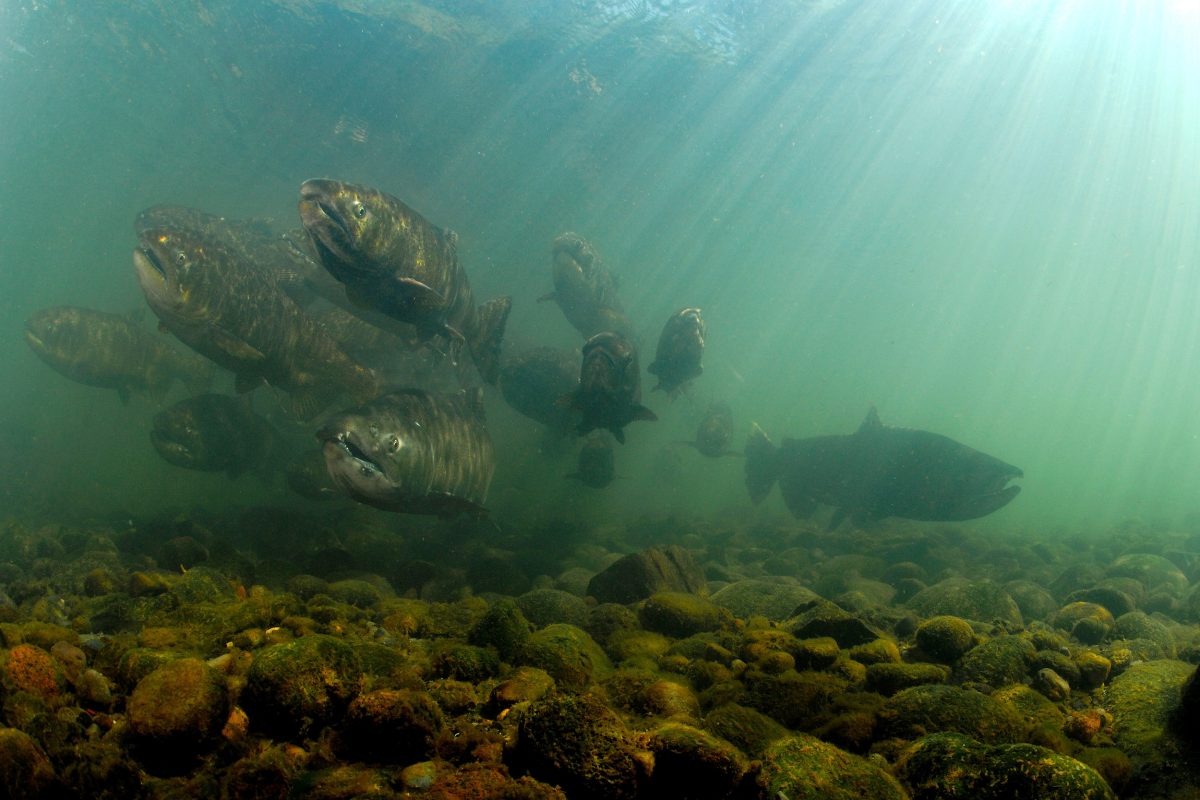 In the Lemhi Valley, the population of returning adult chinook salmon is still nowhere near its historical number. Photo by Mark Conlin/Alamy Stock Photo

Over one summer night, ranchers stopped irrigating for 12 hours. After dinner, they gathered at the riverbank, some carrying pajama-clad children in their arms, to watch the water flow. Heavy equipment removed the earthen dams then used to divert water to fields and the dry riverbed refilled. Then the water surprised everyone and kept rising. The flow was so high that spectators couldn’t see exactly how many fish they helped.

“We stayed out there almost all night, ranchers and agency folks, drinking beer on the bank,” Trapani says. It was the culmination of over a decade of forming relationships.

Since that successful fish flush, ranchers and biologists have worked together to keep the 75-kilometer-long waterway flowing, even through dry summers. Over 25 years, USBWP and partners have reopened over 120 kilometers of tributaries by re-engineering irrigation structures that blocked flows. This keeps the Lemhi running and allows young fish to find refuge in the cool, clear side streams. Individual ranchers have also agreed to leave water in the river for fish. The chinook population still isn’t huge—returning adults number in the hundreds—but it’s growing.

There is, however, more to be done. A recent study points to a lack of habitat suitable for juvenile salmon as the current bottleneck to further recovery. “Too many babies die because there’s not enough room,” Trapani says.

But the Idaho Department of Fish and Game and their partners are already working on that problem. The Lemhi is being returned to its natural slow, sinuous path, undoing the damage caused when parts of the river were artificially straightened in the mid-20th century.

Trapani stresses that Idaho salmon face daunting perils outside the Lemhi Valley. Eight dams obstruct the Columbia and Snake Rivers. Predators and pollution stalk the fish on their journeys to and from the ocean, and a recent period of warm ocean waters provided meager food for salmon.

The Lemhi community kept the silver-sided fish from blinking out in the 1990s. The unique collaboration in the Lemhi is a big reason Salmon, Idaho still welcomes home its eponymous fish. The valley’s success is a model for other communities hoping to rejuvenate local fish runs.