The Mississippi delta is under attack from an invasive insect. Photo by Nathan Benn/Getty Images

An invasion of tiny insects is killing swaths of coastal marsh at the mouth of the Mississippi River, and has turned an already unraveling landscape into open water in a matter of months.

Thought to have hitched a ride on a cargo ship from Asia sometime last year, an aphid-like insect known as a mealy bug, or scale, is decimating roseau cane, a hardy, tall-growing reed that binds much of the lower Mississippi delta. The insect works its way into the plant’s stalks and sucks the sap, weakening or killing the plant. Conservative estimates by the Louisiana Department of Wildlife and Fisheries put the damage at about 400 square kilometers, including nearly all of the Delta National Wildlife Refuge (DNWR), a key stop for birds migrating across the Gulf of Mexico.

“As the roseau goes, so goes the refuge,” says James Harris, manager of the DNWR.

Roseau is the Louisiana coast’s most erosion- and flood-resistant marsh plant. Its finger-thick roots grip sandy soil, and its stalks grow densely enough to catch and hold passing river silt, making the roseau cane a land builder on a coastline that is losing land at an alarming rate. Since 2010, Louisiana has seen the equivalent of a football field of coastal marsh disappear every 100 minutes. The reasons are many—erosion from oil and gas exploration, sea level rise, land subsidence, and the vast Mississippi levee system, which robs the coast of sediment, sending much of it into the gulf. The arrival of the scale creates a host of challenges, and unanswered questions. 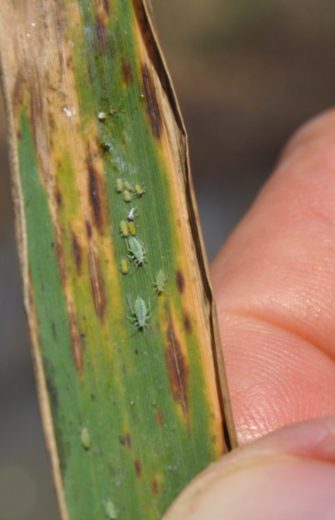 This is the roseau cane mealy bug, Nipponaclerda biwakoensis. Photo by Tristan Baurick

Scientists first identified the insect in April 2017, months after many stands of roseau had been reduced to clumps of blackened roots.

“What we’re seeing out there—it’s a big alarm,” says Todd Baker, a biologist with the Louisiana Department of Wildlife and Fisheries. “We’re going to lose a lot of wetland really fast.”

Scientists are scrambling to figure out how far the scale has spread and how to stop it. In June, it was thought to be in just three of Louisiana’s coastal parishes. But a survey conducted this summer found the insect in at least 11 parishes, infesting marshes from New Orleans to the edge of Texas.

In China, the solution to scale outbreaks is fire. But controlled burns are a dangerous prospect in the Mississippi delta, where the wetlands are dotted with hundreds of oil and gas wells and a tangle of pipelines.

Insecticides would harm the fragile wetland ecosystem and the delta’s valuable fisheries, particularly shrimp and crab.

As the die-off worsens, more problems will arise, Baker says. Increased erosion may alter the delta’s busy shipping channels; and the oil and gas industry, which didn’t build its wells and pipelines to withstand direct exposure to waves and storms, may find itself dealing with more frequent spills.

Inland, sugar cane farmers are paying close attention to the insect’s spread. Their crop has many of the same characteristics as roseau cane, and could become the scale’s next target.

State and university scientists are working on a two-year plan to study the scope of the problem and test several solutions. But at the current rate of destruction, two years may be too late.

“We need time, but time is not on our side,” Baker says.