Scallops, like deer, freeze in the headlights. A blast of artificial light causes scallops to refuse to swim. It’s an unusual reaction, given that marine creatures generally either flock to the light, like moths, or scurry from the intrusion. Understanding this odd behavior might help governments take better care of scallop fisheries.

Liese Siemann, a research biologist at the Coonamessett Farm Foundation in Massachusetts, discovered the mollusks’ motionlessness by accident while watching videos of Atlantic sea scallops off the east coast of Long Island, New York. Traditionally, scientists survey scallop fishing grounds by dredging—scooping creatures from the seafloor to count them. But Siemann and her team were testing video survey equipment, trawling a camera through the sea. She says video surveys are safer for protected species or in protected areas, and are becoming more common.

Looking at the footage, Siemann noticed that when the camera’s light was off, scallops swam away as the sled approached. But when the camera’s light was switched on, the scallops seemed to stay put. Scallops aren’t the most mobile animals, but they can swim a few meters at a time by opening and closing their shells. They can also spin around, jump, and flip over if they get turned upside down.

Siemann mentioned her weird observation in a team meeting. “Everyone else was equally surprised,” she says. So she investigated the footage more thoroughly. She found that the camera light had triggered a dramatic response in scallops. With the light off, between 18 and 28 percent of scallops swam away from the sled. But when the light was on, less than 5 percent moved.

Some fish are attracted to artificial light; others tend to flee it. But, Siemann says, no other marine animal has been observed going still in the glare of artificial light.

The researchers think this behavior might happen for the same reason it does in the proverbial “deer in the headlights.” A deer’s eyes are adapted for dark, so a bright light momentarily blinds it. A scallop has dozens of tiny eyes—embedded in a fleshy mantle that rims the edges of its shells—that might also be overwhelmed by light. Another possibility, Siemann says, is that light makes scallops shut their shells so they can’t swim. 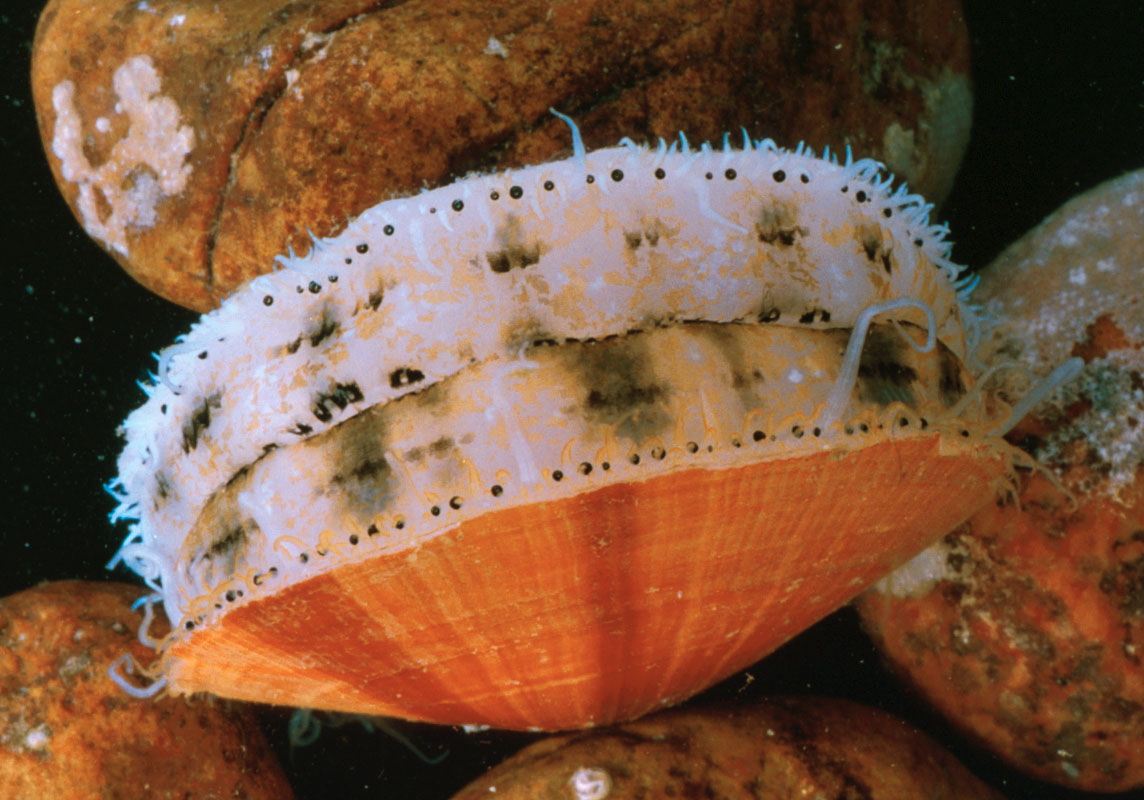 The little black dots ringing this Atlantic sea scallop’s shells are its multitude of eyes. Photo by Dann Blackwood/USGS/Wikimedia Commons

Siemann believes the finding is “very important” for scallop management. To accurately count animals in the ocean, scientists need to know how those animals react to the surveying equipment—whether they freeze or flee, for example. Scallop behavior is still mysterious, but Siemann hopes future underwater research and lab experiments will shed some light.