In the Sir Selwyn Selwyn-Clarke Market on the island of Mahé, Seychelles, a fishmonger begins to butcher a shark. Photo by Hemis/Alamy Stock Photo

Despite all of the doom and gloom news stories about shark population declines, sustainable shark fisheries exist. But while shark fisheries are an important part of the economy and food security in coastal communities around the world, the most sustainable fisheries are heavily concentrated in nations that have well-funded research, management, and enforcement infrastructure. About 90 percent of the global shark catch occurs in nations that don’t have these resources available, which means we’re missing critically important information from many of the world’s fisheries. One of the most efficient and effective ways to gather this data is for scientists to directly observe landings by spending time taking market surveys in local fish markets. British scientist John Nevill of Environment Seychelles has been doing exactly that in the main fish market of Victoria, in Seychelles, a small island nation of about 90,000 people, for the past six years. “The Seychelles are an ideal research location,” says Nevill who often shares his market observations in real time through social media. “Ninety percent of the whole country’s catch is on one island and 90 percent of that catch is in a few markets, so a few spotters can get highly representative catch data for the whole country.”

Market surveys are an important and increasingly recognized scientific research method, especially in the developing world. “Speaking with fishermen and wandering around markets are great ways to get a sense of what’s being caught,” says Dave Ebert, the director of the Pacific Shark Research Center and the president of the American Elasmobranch Society, who has used relationships he’s developed with fishermen to get samples for his research all over the world. “It’s the best way to get a sense of what’s going on where they’re fishing.”

This work is important, but hardly glamorous. In order to document and measure every shark caught, Nevill arrives at the fish market early—usually between 5 and 6 a.m.—and works fast, getting to the sharks before the fishmongers cut and sell them. And the markets are chaotic, loud, and smelly. (Sharks have urea in their blood, so they have a strong smell even when they’re not baking in the tropical heat.) “I personally become very smelly very rapidly because I’m handling everything. After three or four hours, I’m pretty ripe,” Nevill says.

He’s worked closely with the fishermen and fishmongers over the years to build relationships, even helping local fishermen form a fishermen’s association and doing odd jobs around the fish market. “It’s crucial that I don’t upset the fishermen,” says Nevill. “The fishermen are not only accepting of my work, but helpful. They’ll keep things aside for me and will call me if they have something interesting.” 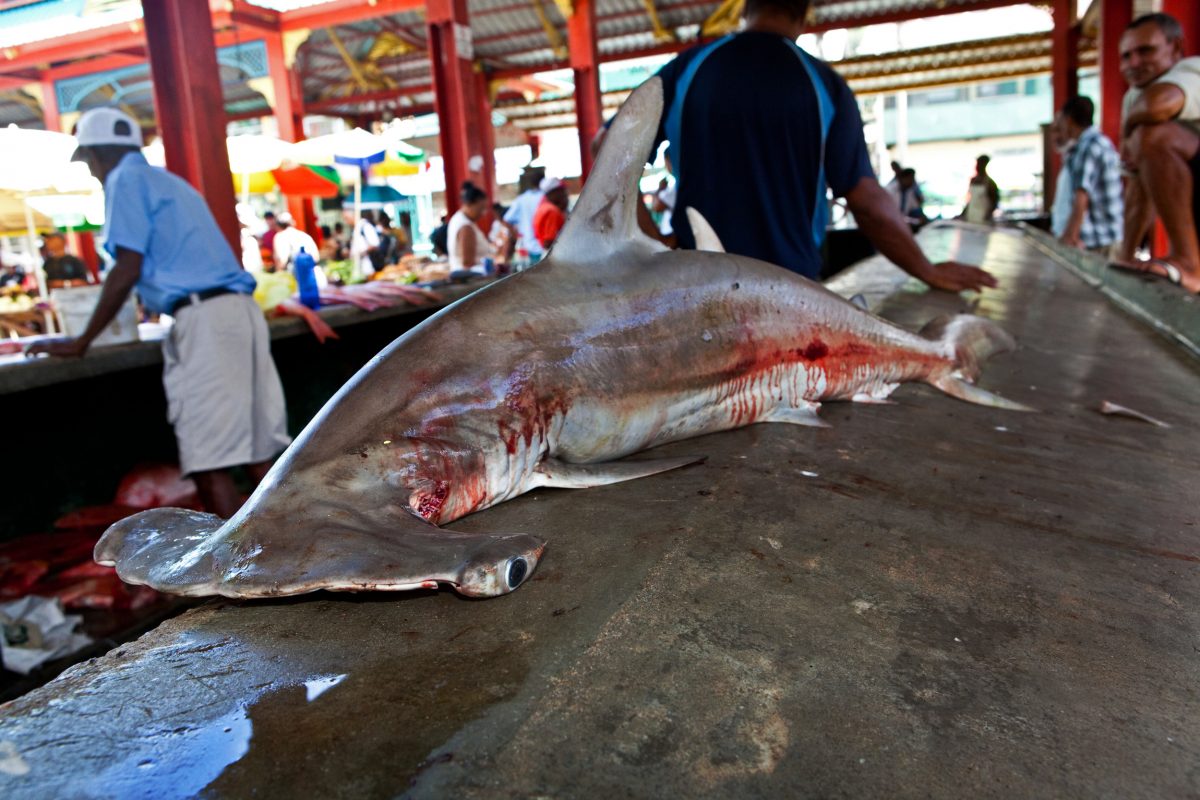 He regularly sees as many as 25 species of sharks in the market, and during his latest study he examined and measured more than 22,000 sharks. The Seychelles’ shark fishery is currently driven by local demand for shark meat rather than global demand for shark fins, but demand for meat is met quickly, so artisanal fishermen often just stop catching sharks after they’ve already caught a few. Because of this, Nevill thinks that the local directed shark fishery is largely sustainable.

There are concerns, however, about some aspects of shark fisheries in Seychelles, especially with respect to by-catch of species of concern. “The problem is the by-catch of juvenile sharks in other fisheries,” says Nevill. “There’s lots of nursery habitat around the Seychelles for juvenile sharks, and these are popular fishing grounds.” Specifically, scalloped hammerhead sharks, listed as globally endangered by the International Union for Conservation of Nature, are the most commonly caught shark species in Seychelles by far—and they’re often caught as pups. Nevill notes that a whole scalloped hammerhead sells in a market for about the same cost as a beer at the pub.

Nevill has worked closely with local environmental nonprofits, industry associations, and government officials to help train other experts to perform market surveys, and has created a new NGO called Seatizens to train citizen scientists. His data has been used to produce a local ID guide of commonly caught species and is also contributing to a National Plan of Action for Conservation and Management of Sharks, a document developed in accordance with United Nations guidelines that will guide local shark fisheries. He’s also using his data and the relationships he’s built to push for government action to conserve threatened local species such as mobulid rays.

Market surveys are an increasingly critical part of marine biology and conservation research and have led to important discoveries around the world including the rediscovery of sharks thought to be extinct. Nevill hopes that his data will help protect local shark species and ensure that local fisheries stay sustainable.