Hector’s dolphins pop up to the surface to grab a breath the old-fashioned, non-mouth-breathing way. Photo by Cultura RM/Alamy Stock Photo

If you’ve been watching Netflix’s Stranger Things, you know being called a “mouth-breather” is an insult of the highest order. But for one dolphin, being a mouth-breather has likely meant the difference between life and death.

Dolphins don’t normally breathe through their mouths. Instead, they inhale and exhale through the blowhole on the top of their heads. But three years ago, researchers in New Zealand noticed the strangest thing—a single Hector’s dolphin willfully ignoring millions of years of evolution, and instead gasping out of its big, toothy mouth. And this story gets even weirder if you know anything about dolphin anatomy.

Unlike humans, a dolphin’s larynx, which carries air to the lungs, and esophagus, which carries food to the stomach, do not usually share an opening. In other words, dolphins don’t have to worry about something “going down the wrong pipe.” But the two systems aren’t totally separated. The dolphin’s larynx actually punches straight through its esophagus.

This arrangement could actually be a problem for dolphins when they’re trying to eat a particularly large fish, says Stephen Dawson, a marine biologist at the University of Otago in New Zealand, and lead author of a paper published last week describing the mouth-breather. But this quirk of physiology also enables this dolphin’s particular workaround. 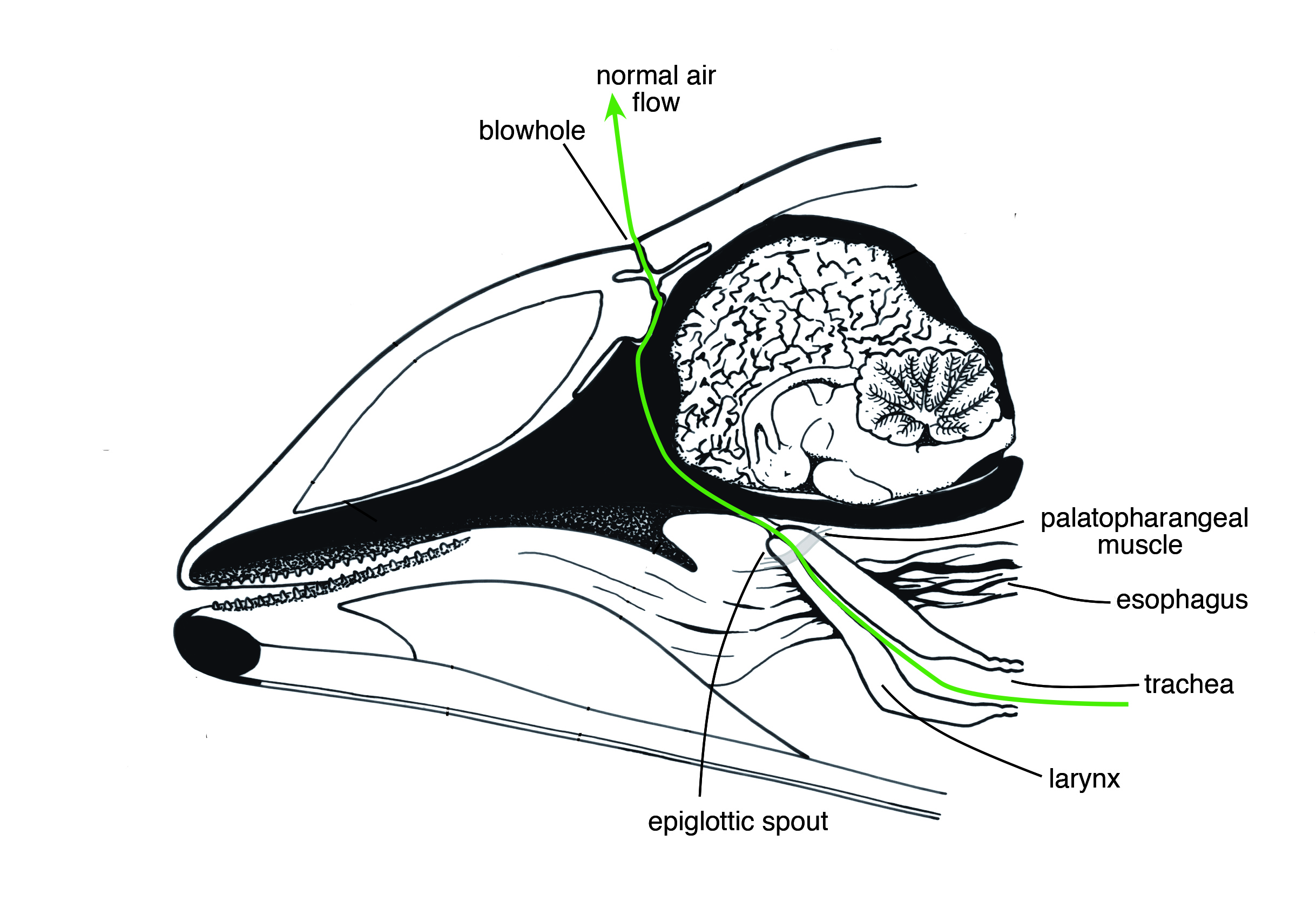 In their normal physiology, shown above, air flows between a dolphin’s lungs and its blowhole. In the mouth-breathing dolphin, the scientists suspect that the larynx disconnects from its normal pathway at the epiglottic spout, and instead creates an opening to the mouth. Adapted from an illustration by Stephen Dawson

In dolphins, the larynx is not a solid tube connecting the blowhole to the lungs. Instead, a dolphin’s airway is made of multiple interlocking sections of cartilage. At the end of one of these sections is the epiglottic spout, which sits where the larynx passes through the esophagus. Normally, the epiglottic spout is held in place by a strong muscle. But in this mouth-breathing Hector’s dolphin, the scientists suspect that every time it breathes, it withdraws this spout so that the lungs connect to the mouth, rather than the blowhole.

Dawson and his coauthors can’t say for sure why the dolphin does this, but they have a few ideas. The most likely scenario seems to be some sort of quirk of the muscles that control the blowhole, since it remains shut tight even when the dolphin surfaces. This could be an injury, abscess, tumor, or other obstruction that prevents the blowhole from opening properly. It’s also possible the muscles where the esophagus closes around the larynx have become injured or infected, or that a foreign object has found its way elsewhere into the respiratory system.

Whatever the cause, the same dolphin has been spotted performing this behavior for three years, apparently without ill effects.

Dawson says he’s long-suspected dolphins have some way of moving their larynx to create more room. “But the published literature states, and the prevailing view among marine mammalogists was, that this was impossible,” he says.

“The behavior is a bit surprising since it has not been observed or reported previously,” says Ted Cranford, a marine biologist at the San Diego State University who was not involved in the new research.

Cranford studies evolution in dolphins, particularly as it relates to biosonar, and he said that, anatomically speaking, it checks out.

“It is clear that there is nothing that prevents these animals from using this new pathway,” said Cranford. “We should all keep in mind that behavioral plasticity probably has more scope for variation than we might expect.”

In other words, there’s no telling what an animal might be capable of when survival’s on the line. Mouth-breathing in a dolphin—why not?