Researchers are hoping to track the conditions lobsters experience as they travel through the supply chain with an eye to reducing the number that die along the way. Photo by WoodysPhotos/Alamy Stock Photo

Lobsters are big business in Maine. In 2019 alone, the state netted almost US $500-million from this popular crustacean. Profits would likely be even higher, though, if the seafood industry could reduce “shrink”—the number of lobsters that die on their way through the supply chain. Every one percent in shrink means almost $5-million in unrealized income, says Eric Thunberg, an economist at the National Oceanic and Atmospheric Administration (NOAA) Northeast Fisheries Science Center in Woods Hole, Massachusetts. “Those aren’t small losses.”

“There’s a lot of interest in reducing shrink,” says Rick Wahle, a zoologist at the University of Maine. “Unfortunately,” he says, “there’s very little hard data to work with.”

“In most cases, it’s not going to be rocket science to mitigate these problems,” says Wahle. “It may just be shorter handling times, reducing time between the dock and the holding tank, dropping more aerators in the water, or lowering storage density.” The question is where along the supply chain those changes should be applied. 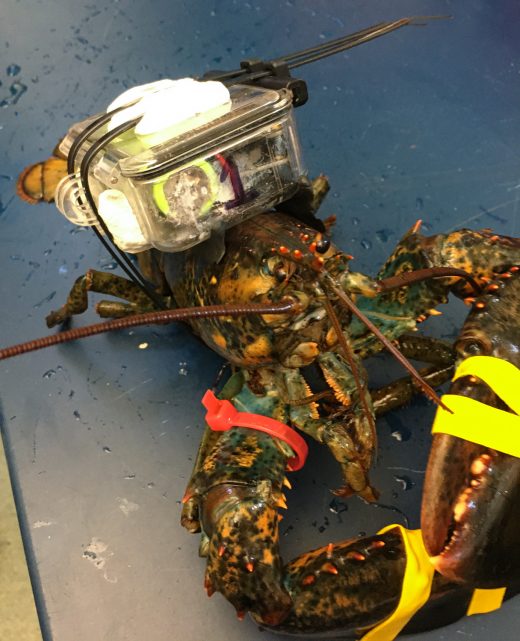 The crustacean heart and activity tracker (C-HAT) is a fitness tracker for lobsters. Photo courtesy of University of Maine Lobster Institute

A new project, led by Wahle and supported by NOAA, is now tackling that question with two purpose-designed technologies to record the health and environment conditions of lobsters as they move from trap to distributor. One sensor package, called MockLobster, measures temperature and acceleration of a crate of lobsters as it’s moved around. The team wants to add other sensors for dissolved oxygen and acidity, but these features are still being prototyped.

The second system, the crustacean heart and activity tracker (C-HAT), attaches to a single lobster like an oversized backpack and functions as a kind of animal Fitbit.

“We wanted to call it a Fitbug,” says Wahle, “but apparently that name was already trademarked.” The C-HAT uses infrared light, like the finger pulse meters used by doctors, to measure heart rate. A small accelerometer records how the lobster is jostled during transport. “It hasn’t been miniaturized as much as we’d like,” he notes. “It’s about the size of a GoPro camera at this point.”

Wahle and his colleagues began their work with MockLobster and C-HAT during a 2019 pilot study, and now they’re moving on to full-scale field trials. “We’re planning to test at six wharves along the coast that have different environmental conditions,” says Wahle. Two sites are in northeastern Maine, which has cool, foggy conditions; two are in the southwest, which is hotter during the summer; and two are along the mid-coast.

“We’ll be sampling over the course of the fishing season, too,” Wahle adds, so they’ll get both seasonal and geographic components.

The team will document what it’s like for a live lobster as it’s hauled up in a trap, transferred to the live well of a fishing boat, transported in a crate with dozens of other lobsters or stored under a wharf, and then finally trucked to a dealer. Wahle estimates they’ll measure up to 3,000 lobsters during each of the project’s two years.

“This certainly addresses a real problem,” says Thunberg, who is not involved in the current study. “It doesn’t look like they’ve missed any major step of the process either. It’s important to know what a lobster goes through all along the line.”

The project also presents a rare opportunity to look more deeply into the environmental status of lobsters, says Deborah Bouchard, an ecologist at the University of Maine. “We don’t do natural fisheries surveillances that often.”

“This amount of sampling hasn’t been done before,” she adds. “We’re building a new database.”

Seafood companies and dealer associations will be paying close attention to the results. If problems can be tied to specific boats, wharves, or processors, then targeted changes can be made to improve yields for the entire community. Two years of tracking instrumented crustaceans should provide some clear answers for both scientists and Maine’s lobstermen.