Dusk has fallen deep in a desert drier than the Sahara, and four researchers are blasting the calls of a tiny seabird into the night. They’ve come to this seemingly barren and empty place to find one of the most mysterious seabirds on Earth.

The scientists are waiting near a mist net, hoping for a small miracle. Then … the flutter of wings. Closer inspection reveals a little black bird with a white belly caught high in their net—drawn in by the calls of its own kind. A band of white feathers curves across its rump like a smile. Gently, they take it out of the net to confirm what they are holding: a white-vented storm petrel, 75 kilometers inland in Chile’s Atacama Desert.

“That night we felt absolutely lucky,” says Rodrigo Silva, an ecologist with ROC, an organization whose name translates to the Bird and Wildlife Observer Network of Chile. “We were opening these mist nets in the middle of nowhere. It was almost like a miracle to catch a bird.”

Searching a 105,000-square-kilometer desert for a blackish bird roughly the weight and length of a toothbrush seems like an impossible task. The birds nest in covert crevices and burrows, and only visit their nests at night. “You can easily miss the fact that you are standing on a colony if you don’t know what to look for,” Silva says. But the team beat the odds—and went on to find not just one bird, but two colonies.

At a glance, the Atacama seems like the last place anyone would find a seabird. It is the driest nonpolar desert in the world, with a typical elevation between 1.5 and two kilometers above sea level. It is so inhospitable to life that NASA considers it “one of the most Mars-like environments on Earth.” But storm petrels can cope with difficult landscapes. Across the planet, their kin are known for choosing particularly secretive and hard-to-reach nesting grounds to avoid predators.

Researchers have long suspected that several species of Chile’s enigmatic storm petrels might be holding out somewhere in the Atacama, since their mummified bodies have been found there for decades. Naturalists with ROC have spent the past eight years tracking down desert nest sites to confirm those suspicions. 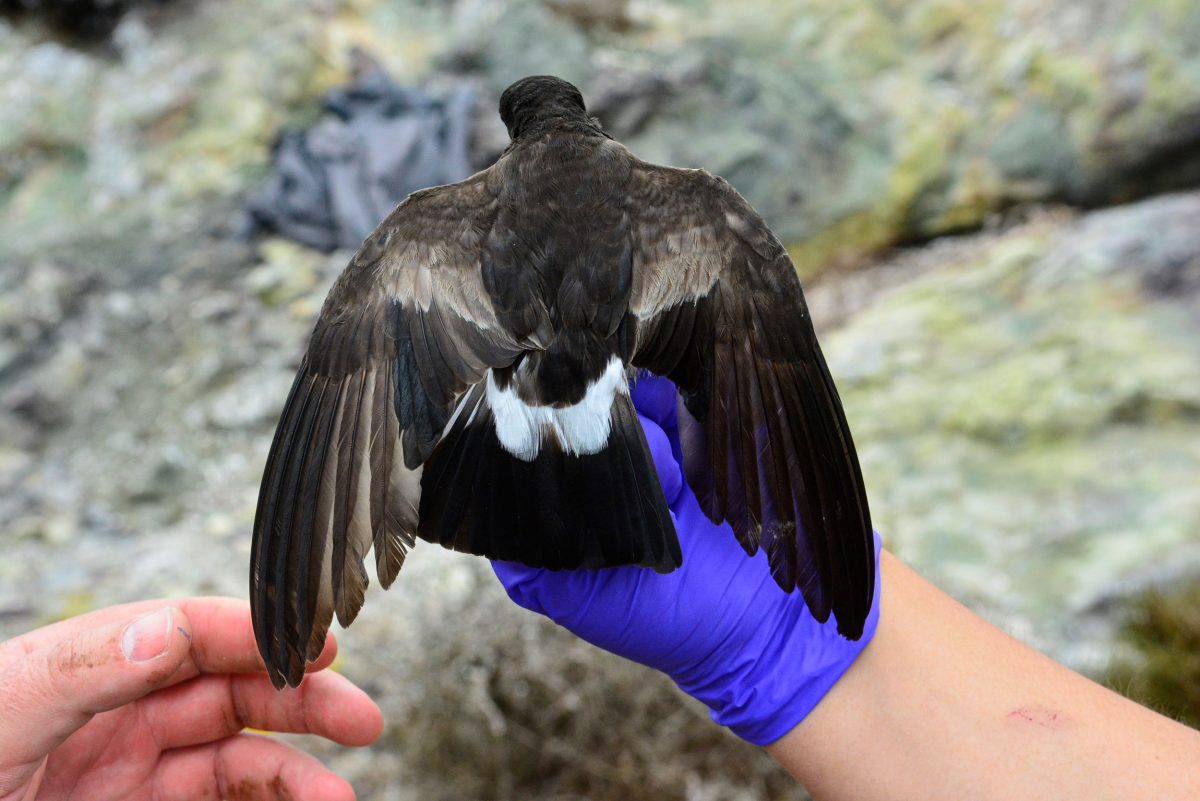 Since 2013, ROC has scoured a linear 870 kilometers of desert coastline, rumbling out to remote locations in trucks and spending the darkest nights of the month sniffing holes in the ground for a fishy whiff of seabird, sticking endoscopic cameras into crevices, and listening for the mouse-like squeaks of parents calling to chicks.

White-vented storm petrels are the sneakiest of this sneaky bunch. They have a weaker scent than the other two species, whose nesting holes can be picked up by humans. But to find the white-vented storm petrel the researchers had to rely on dogs raised and trained by Chile’s Agricultural and Livestock Service (SAG). Scent-trained dogs can only be used sparingly, however. According to SAG, they get carsick on the long drive to the remote desert sites and they often need to wear booties so they don’t burn their feet.

At Pampa Hermosa, in the northern Chilean Atacama, the dog brigade located 14 active nests tucked into saltpeter deposits. Far to the south, the team suspected white-vented storm petrels were nesting at the ringed storm petrel colony that had been discovered 75 kilometers inland in 2018—a suspicion they confirmed when the single white-vented bird flew into their mist net on January 8, 2020.

While storm petrel nests are best located by smell, the team is often tipped off about their potential presence when they find dead storm petrels near development projects. These dead birds, which had been drawn in and confused by light pollution, highlight the importance of the researchers’ efforts, says Medrano. “If people don’t know there are breeding colonies, they won’t take them into account in planning development,” he says.

“We need to know the population so that we can assess what the risk of extinction is, and if we don’t know where they’re nesting, it makes it very difficult to assess that species,” says Bethany Clark, a seabird researcher with BirdLife International, the authority on seabird listing for the International Union for Conservation of Nature (IUCN) Red List of Threatened Species. “It’s easier to get your conservation project funding if you have a species that is threatened with extinction,” says Clark, who was not involved in the research.

As well as hunting for nesting colonies, ROC scientists and their partners are carefully noting any nearby threats from mining and light pollution. As a result, the Markham’s and ringed storm petrels are now listed as near threatened rather than data deficient according to the IUCN. But white-vented storm petrels probably won’t get a new status just yet, Silva says. There’s too much that researchers still don’t know about this most mysterious species, and more searching to be done in the desert.

“Finding these birds there—documenting that they exist—is critical to raising awareness,” says Brad Keitt, the oceans and islands program director with American Bird Conservancy, who was not involved in the research. “This work really proves that there’s still so much we don’t know.”