In a restored wetland in North Carolina, salt-stressed bald cypress trees stand in water that becomes increasingly saline during droughts. The influx of salt water triggers the release of nitrogen from the wetland soil. Photo by Cliff Hollis/ECU News & Communication

In 2015, Kate Tully visited farms near the eastern shore of the Chesapeake Bay. She was investigating whether sea level rise had caused brackish water to move upland, a process called saltwater intrusion—evidence of which she found in the form of increased salinity in the fields and surrounding ditches. When the researchers viewed the sites on Google Earth, they could even see white rings around the farms where water had evaporated and left salt.

“It’s crazy,” says Tully, an agroecologist at the University of Maryland, College Park. “You can taste it. You put your finger on the field, and it’s salty.”

Saltwater intrusion was killing the area’s soy, corn, and wheat, which couldn’t tolerate the rising salinity.

But as Tully and her team worked in the fields, they discovered an even more worrisome process that was well underway. Their studies suggest that the inundating seawater is triggering chemical reactions in the soil and releasing a long-dormant pollutant: phosphorus. The researchers worry that the phosphorus could reach the Chesapeake Bay and fuel oxygen-sucking algal blooms that kill fish and crabs.

The phosphorus is from chicken manure fertilizer, which farmers have been laying on the fields ringing the Chesapeake Bay for decades. The region—one of the oldest farming districts in the colonial United States—is also part of the Broiler Belt, known for its intensive poultry industry. Phosphorus has accumulated in the soil, but now it may be released.

Tully doesn’t believe that the farmland nutrients will flood the bay all at once. But “firehose moments” could occur, she says, when storms push seawater inland.

The situation brings to mind other examples of how the long-term effects of climate change could trigger local events that amplify the environmental damage. For instance, warming of the Arctic permafrost and seafloor could cause the greenhouse gas methane to be released, driving further warming. Permafrost thawing, similarly, could release long-stored contaminants, such as mercury. While nutrient pollution would not create a feedback loop that speeds up climate change—as methane would—Tully thinks the effects on the bay could be dramatic.

“Is there a possibility for us to tip the ecosystem into a different ecosystem?” says Tully. “Yes, definitely.”

To come to their conclusion, Tully’s team analyzed the soil at three farms in Maryland and found that phosphorus, bound up in the molecule phosphate, appeared to be moving from the fields toward ditches. From there, it could then flow into creeks connected to the bay. 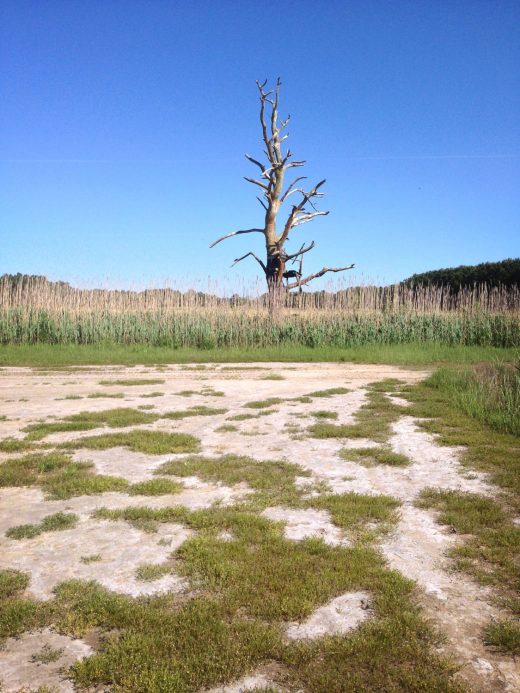 Salt water is likely unlocking phosphate from the soil through a series of chemical steps. In soil with plenty of oxygen, the phosphate in fertilizer can bind to iron. When the ground becomes waterlogged, soil pores containing oxygen fill with water instead. Under these conditions, iron releases the phosphate. Sulfate, an ion in seawater, then binds to iron—leaving phosphate free to move around.

Tully found that average phosphate levels in ditch water and nearby marshes are about an order of magnitude higher than the US Environmental Protection Agency’s regional water quality guidelines for phosphorus. “They’re screaming high,” says John Kominoski, an ecologist at Florida International University in Miami.

Levels of nitrogen, another fertilizer nutrient, in the study area were less worrisome, says Dani Weissman, an ecologist on Tully’s team. Nitrogen has been the main nutrient polluter in the Chesapeake Bay, but phosphorus may become an increasing problem because it sticks around, says Chris Craft, a wetland ecologist at Indiana University Bloomington. Microbes can turn nitrogen-containing molecules, such as ammonium, into nitrate, which then gets converted into nitrogen gas that can be released into the atmosphere; phosphorus doesn’t have a similar process. There’s “no way to take it out,” Craft says.

Tully’s team doesn’t yet have evidence that the nutrients have reached the Chesapeake Bay. Overall, the bay’s phosphorus levels have declined over the past two decades, thanks to efforts to reduce fertilizer use on farms, Weissman says. But she is concerned that this legacy fertilizer could pollute the bay in the future.

Ultimately, the amounts of nutrients released because of saltwater intrusion are probably small compared to runoff of recently applied fertilizer, Craft says. He compares the situation to giving another pack of cigarettes to a chain-smoker. “This is an added sort of insult,” he says. Craft predicts that the damage will vary from year to year.

But the problem goes beyond the Chesapeake Bay. Marcelo Ardón, an ecologist at North Carolina State University, has studied a former farm that was converted to a wetland in North Carolina, where droughts increased the salinity of the wetland and appeared to have triggered the release of legacy nitrogen.

Ardón estimates that if the sea level in the region rises by one meter—which could happen by 2100—about 18,000 metric tonnes of ammonium could be released. That’s roughly half the amount that the Mississippi River dumps into the Gulf of Mexico annually. Ardón cautions that he doesn’t know how quickly such a release would happen, but it could be “a serious problem,” he says.

Legacy fertilizer releases could happen in other coastal agricultural areas as well, such as Texas, Alabama, Georgia, and California’s Sacramento Valley, Kominoski says. Saltwater intrusion also is affecting Bangladesh and Vietnam, Tully notes. Farms there probably have less fertilizer stored in the soil than countries with a longer history of industrialized agriculture but will still suffer crop damage, she says.

To stop the flood of nutrients, Tully’s team is investigating the ability of salt-tolerant crops, such as rapeseed, and perennial grasses to grow well in the conditions observed at the Maryland farms. These plants could suck up phosphorus and nitrogen. Fields could later be converted to wetlands, which are better at retaining the nutrients. But most farmers in the area want to keep farming, Tully says.

Scientists still lack critical numbers such as the amount of legacy fertilizer nationally and globally, Ardón says. “This is an important risk that we haven’t fully gotten a handle on.”