Wildfires are a natural part of the functioning of many forest ecosystems, but on the hyper-wet coast of British Columbia, researchers have discovered historical fires were mostly set deliberately. Photo by Kip Evans/Alamy Stock Photo

It’s next to impossible to start a forest fire on the rain-soaked fringes of British Columbia’s central coast. About 430 kilometers northwest of Vancouver, in a clutch of islands near the Heiltsuk First Nation community Bella Bella, there are 1,200-year-old bonsai red cedars that stand less than two meters tall, stunted by poor soils and the three meters of rain that fall anually. Even in summer, a misty shroud often covers the trees.

Across most of the Pacific Northwest, humans have used forest fires as a tool for managing the ecosystem for millennia. But the moisture along the thin band of temperate rainforest known as the hypermaritime zone, which stretches from the tip of Vancouver Island to Alaska, means fire was never a regular occurrence. Or so it was thought.

It took Kira Hoffman,* a University of Victoria doctoral candidate with years of experience as an early-response firefighter in BC forests, to see the signs. What she discovered suggests that this supposedly pristine wilderness was in fact carefully managed by First Nations people using deliberate forest fires for at least 700 years, and possibly much longer.

For Hoffman, the spark for her discovery was when she accidentally spotted a fire-scarred Western red cedar in 2013. She was on Hecate Island at the time, about 60 kilometers south of Bella Bella, studying soil microbes. Up to this point, everything she’d heard said fire was not a part of this ecosystem.

But the presence of that fire-scarred tree stayed with her, consuming her thoughts so much that she changed the focus of her studies from soil ecology to fire ecology. “The tree haunted me,” she says. “When did this fire burn? Suddenly I had all these questions.”

Over the next four years, Hoffman focused on a 2,000-square-kilometer tract of rugged coastal temperate rainforest. The area—predominantly a soggy bog forest—is an ideal fire laboratory: it has never been industrially logged, it has been home to people for at least 13,000 years, and for Hoffman, working on a remote coast, it is less than 10 minutes by boat from the Hakai Institute’s Calvert Island Ecological Observatory.

By analyzing the scars burned into trees by historical fires—and the patterns of forest regrowth—Hoffman reconstructed 700 years of the fire history on Hecate Island. She ruled out the idea that the fires were started by lightning strikes after mapping the density of past lightning strikes, and finding they would not be sufficient. 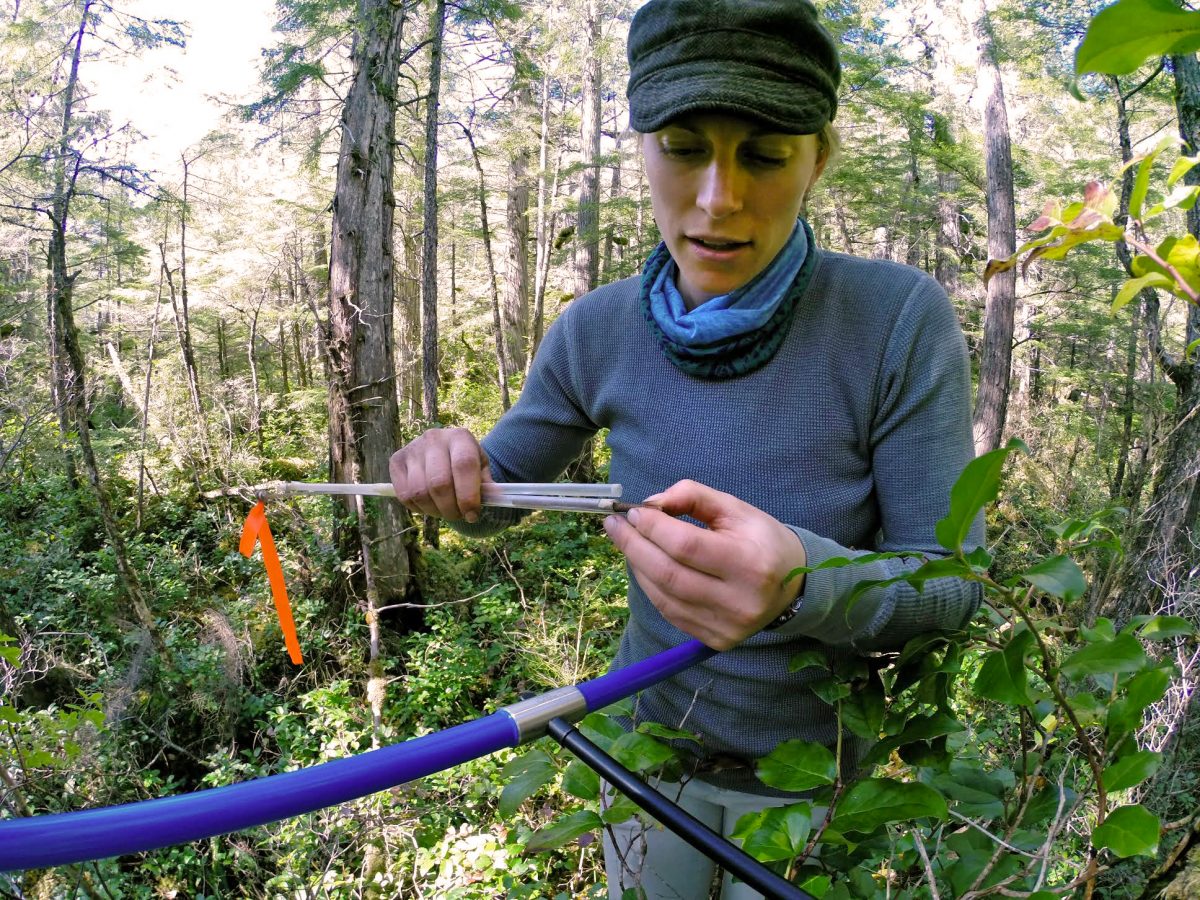 Drawing on archaeological evidence, she also identified 20 former villages across the study area, and found signs that the locations and sizes of the fires were related to where people lived.

In all, Hoffman discovered that between 1376 and 1893, at least 16 fires had burned on Hecate Island—roughly one fire every 40 years.

“There’s no way lightning can explain the amount of fires we found, because it doesn’t happen enough,” she says. “I feel that the fires were intentional, but I’m sure some were accidental too. A majority of the fires, based on the patterns of the flora, would suggest that they knew exactly what they were doing.”

The expertise required to set and manage such fires has since been lost in the area. But as to why they would have been set, University of Victoria ethnobotanist and author Nancy Turner believes First Nations peoples used fire to open up forest areas to grasses for deer and other game. Fire would also be used to make the landscape more suitable for growing berry bushes. “Blueberries would have really been increased, not just in numbers but in quality, size, and overall productivity, about three or four years after the fire,” Turner says.

Harvey Humchitt, a hereditary chief who works for the resource management department of the Heiltsuk Nation, says local people still harvest berries in the region, although deliberate burning is a distant memory. The last time fire swept Hecate Island was in 1893, according to Hoffman’s research, which corresponds with the devastation of smallpox that Humchitt says caused the depopulation of local villages, and the end of fire use in the region. 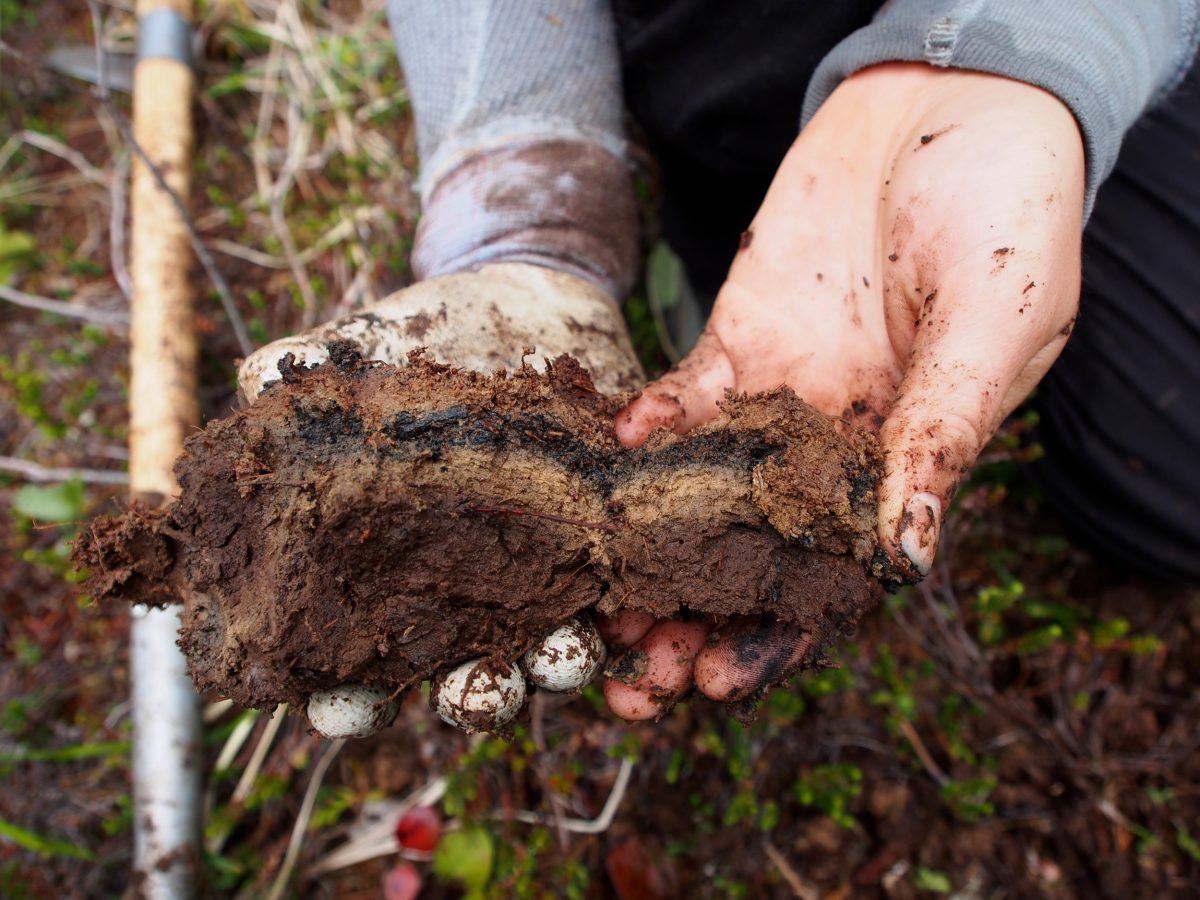 A burnt layer of charcoal stands out against the soil—a sign of ancient burning. Photo courtesy of Kira Hoffman

“Our population [on the central coast] was up around 20,000, but after European contact and smallpox, … [it] dropped to 250,” he says. In the early 1900s, fire suppression also became a strict government policy.

What hasn’t changed, says Humchitt, is that the Heiltsuk today remain careful stewards and managers of their forests. In addition to creating forest conservancies through their own land use planning, there is a movement among the Heiltsuk to revive traditional skills. If there was an opportunity to regain the knowledge of fire management, he adds, it’s something the Heiltsuk would “carefully consider.”

Hoffman, too, aims to learn how First Nations historically used fire. She hopes to travel to coastal communities in British Columbia and ask questions about how fire was used as a tool, with the hope that traditional ecological knowledge can be revived and incorporated into how governments manage fire.

“Fire behavior is becoming more unpredictable and the fire seasons are longer,” Hoffman says. “So having more knowledge to inform how we manage our forests is really important.”

*Kira Hoffman’s research is funded by the Tula Foundation, which also funds Hakai Magazine and the Hakai Institute. The magazine is editorially independent of the institute and foundation.