Manatees have super-sensitive whiskers, but as new research shows, that special sense of touch extends to their body hair as well. Photo by Westend61 GmbH/Alamy Stock Photo

Manatees are not beautiful or buff, but they have something no other mammal does: body hair with super powers. Body hair is a defining feature of all mammals. We all have it, some more than others, but no mammal is known to use it quite like the manatee.

Scientists have been curious about the manatee’s fuzz for a while now. Unlike seals, with their thick, warm pelts, or dolphins and whales, which are sleek and bare, manatees have a scraggly sprinkling of individual hairs here and there. What’s more, under a manatee’s skin, beneath each hair, is another oddity—a blood sinus.

“Pumping blood to the surface to supply 3,000-plus hairs across the body? That’s an expensive endeavor,” says Joseph Gaspard, director of science and conservation at the Pittsburgh Zoo and PPG Aquarium and lead author of a new study on manatee hair. So Gaspard and his colleagues set out to see what purpose the pelage might serve. 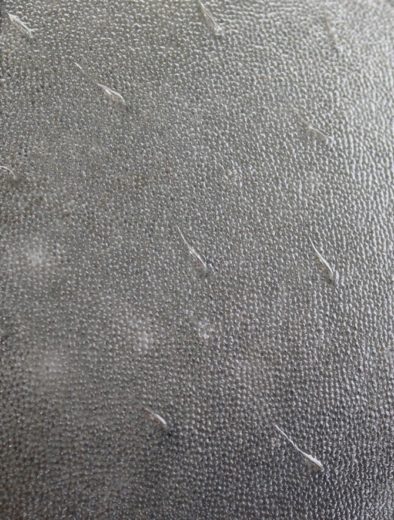 Manatees have only a light dusting of body hairs. Photo by Pittsburgh Zoo and PPG Aquarium

Previous experiments have revealed that the manatee’s whiskers are extremely sensitive—each whisker can discriminate between textures with about twice the dexterity of an experienced reader of Braille. Manatees have exceedingly poor eyesight, so it’s thought that their whiskers help them find and select the right kinds of seagrasses to eat. Manatees can weigh up to 600 kilograms and need to eat one tenth of their colossal weight in vegetation each day.

Gaspard and his colleagues had previously noticed that a manatee’s body hairs seemed similarly sensitive. While working with a manatee, if they happened to touch a body hair, even slightly, the animal would flex or shift its weight in response.

To test the idea that a manatee’s fuzz is as sensitive as its whiskers, the researchers rigged up an underwater apparatus enclosed in a vibration-proof box and placed it next to a patch of a manatee’s flank hairs. The team then directed tiny, focused waves only at these hairs to determine their sensitivity. The manatees in the study had been trained such that, if and when they detected motion, they would reach out and touch a target with their muzzle. As Gaspard and his coauthors found, the manatees’ body hairs could detect even the tiniest of perturbations, though they were still an order of magnitude less sensitive than the whiskers.

But to truly prove that it was the hairs doing the sensing and not the skin or some other manatee magic, Gaspard had to put on his barber’s smock. Using a Wahl mustache and beard trimmer, he buzzed off the manatees’ body hair, leading to what is probably one of the better sentences ever published in a scientific journal:

“Because of the rough skin of the manatees, the trimming left a short stubble.”

And just as Samson lost his strength after his hair was cut, so too did the manatees. Post-trim, the animals were three times less sensitive to motion in the water, although their sensory abilities did not disappear completely. Gaspard suspects this was due to the stubble that remained.

As for what the manatees do with all this information, the researchers think it’s used for navigating the turbid channels they call home. After all, the species has no natural predators and doesn’t need to chase down prey. The hairs may also help them synchronize breathing while resting in a group, which could help with socialization. Whatever it is, Gaspard says the sensory array requires a lot of computing power from the brain, which appears to be about 25 percent somatosensory cortex—“that’s all touch oriented,” he says. “So this animal is very evolved and adapted to the niches it fits into.”

All this time we’ve written off manatees as big, slow, underwater herbivores, but it turns out they’re just quietly taking it all in.