The container ship Rena spilled 350 tonnes of oil into the water off New Zealand after it ran aground on the Astrolabe reef in 2011. Photo by HO/Reuters/Corbis

On the morning of October 5, 2011, the phone rang in the office of Massey University’s National Oiled Wildlife Response Team: the cargo ship C/V Rena had run aground on a reef, oil was leaking into the Bay of Plenty, and the New Zealand government needed help.

The small staff of the round-the-clock response team sprung into action. They set up a mobile rehabilitation center on New Zealand’s northeast coast, and two days later accepted their first patient: a cold, stressed, and oil-covered blue penguin.

But the team had a problem: they only had a few bottles of Dawn dish detergent, and there were hundreds of foot-tall penguins to clean.

“For us here in New Zealand, we can’t get Dawn, which is internationally known as the standard detergent to wash oiled wildlife,” says Louise Chilvers, who is now a senior research officer with Massey’s oil spill response team, but was not at the time of the Rena spill. Dawn is not available in New Zealand stores (even though it comes in a “New Zealand Spring” scent); it is only sold in North America.

Luckily, cleanup workers with International Bird Rescue, who had flown in to help, came through in the nick of time. They called in a special order with Procter & Gamble, the company that makes Dawn, and had a pallet of detergent airfreighted directly to the rehab center. Over the next three months, the team washed and released 383 blue penguins, which are doing swimmingly today. 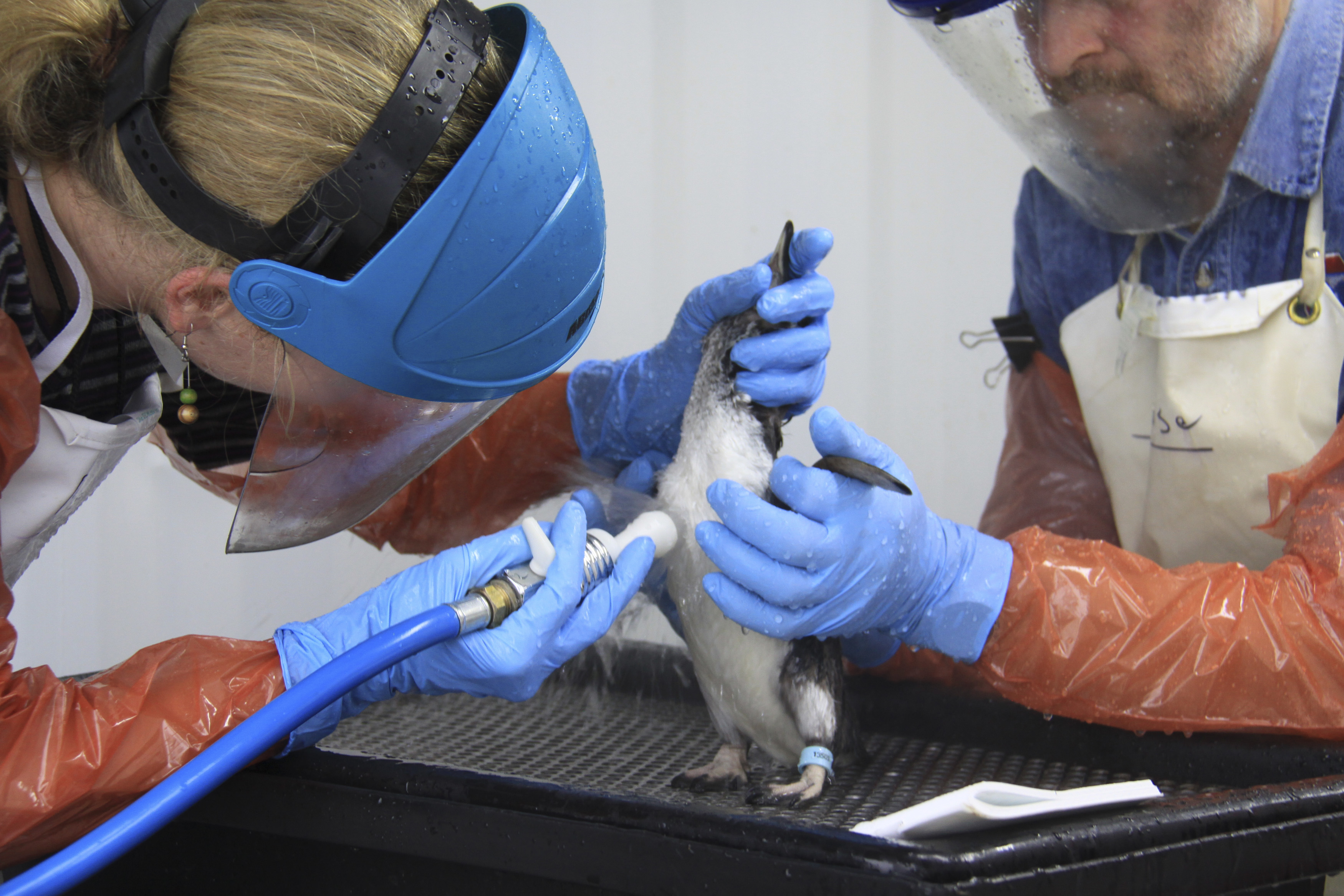 The monumental effort that went into airlifting Dawn into New Zealand demonstrates just how strongly oil spill responders feel about the brand. “We have exclusively used Dawn for over 25 years, and while we continue to test new products,” nothing comes close, says Barbara Callahan, the response services director of International Bird Rescue.

This last-minute heroism to deliver Dawn makes for a good story, but it’s a pretty terrible contingency plan from the perspective of oil spill responders. Chilvers figured there might be some local detergent the team could have used instead, and so she decided to see for herself whether common New Zealand detergent brands stand up to Dawn.

With her colleagues at Massey, Chilvers methodically dipped oil-covered feathers into soapy water baths. In all, the team tested 27 mixes, washing feathers with nine different brands (eight local brands plus Dawn) mixed at three different concentrations. Each feather was washed, rinsed, and dried, and then rated on its cleanliness and dryness.

Perhaps unsurprisingly, given oil spill responders’ devotion, Dawn was far and away the best for cleaning oiled feathers, according to the study. Dawn-washed feathers looked clean and dry; one alternate brand left feathers somewhat clean but stiff; and the rest of the brands left feathers oiled and wet. (For legal reasons, Chilvers insists on noting that none of these detergents are designed for cleaning oil from feathers; the study tested an off-label use. And while we’re making disclosures, neither Chilvers’s research, nor Hakai Magazine, is funded by Procter & Gamble.)

Procter & Gamble keeps the formula for Dawn secret. When asked what makes the detergent special, a company spokesperson said that it contains a “unique blend of surfactants that work to remove oil in the specific temperatures needed to help the animals”—not the most specific testimony.

Yet to Chilvers, her study’s implication is clear: she now keeps a stockpile of Dawn—enough to wash around 100 birds—and keeps American colleagues on the line for backup. She suspects, and suggests, that most wildlife cleanup groups do the same. “Everyone stockpiles some sort of detergent, that I can tell you,” she says.

Although Dawn isn’t sold outside of North America, Procter & Gamble does sell dish detergent under different names in other countries. Callahan says she’s used these to clean wildlife during her twenty-year career and has had no problems. “[Procter & Gamble] swears to us that it’s exactly the same formula,” she says. “Whether it’s Yes in northern Europe or Salvo in Argentina, they work the same.”

Chilvers’s next move is to test Dawn against these other Procter & Gamble detergents—one of which is Australia’s Fairy, which would be much easier to get into New Zealand in case of emergency. If these other detergents clean oiled feathers as well as Dawn, then oil spill cleanup groups will have more options and less risk of running out when the birds need it.

Until Chilvers finishes her tests, however, it’s best to stand by the old line: an oiled bird is darkest before Dawn.