Sarah Gravem has become an expert at finding the small, private, nocturnal sea star Leptasterias in Pacific Coast tide pools. The trick is not to look for the sea stars, she says, but to think like their nearly blind sea snail prey, and act accordingly. “I call it snail Braille,” she says. “I wasn’t looking, I was feeling. I had my tide pools, I knew where [the sea stars] liked to be in the tide pools and where they liked to hide, and I just felt for them in the cracks.”

Once you notice the Leptasterias, Gravem says, you notice that there are sometimes quite a lot of them—hundreds or even thousands of the sea stars in one small site. As she spent more time in the tide pools, Gravem realized that Leptasterias might have a bigger influence on coastal life than their diminutive size and relative anonymity suggest. She dug deeper into this idea, first as a graduate student at the University of California Davis-Bodega Marine Lab, and later as a postdoctoral researcher at Oregon State University. What she found might knock some of the luster off an iconic predator, and reveals the surprisingly complicated understory of one of the most cherished ideas in ecology.

In 1969, ecologist Robert Paine—who passed away June 13—laid out his keystone species hypothesis. Based on his observations in the tide pools of Mukkaw Bay, Washington, Paine argued that the charismatic ochre sea star, Pisaster ochraceus, played a crucial role in controlling the tide pool ecosystem. When Paine removed Pisaster from tide pools, mussels quickly overran the site, crowding out other species and establishing a monoculture. He realized that Pisaster had an effect disproportionate to its abundance in keeping the tide pool ecosystem in balance—an insight that, over the last half-century, has been applied far beyond the coast.

Paine spent his professional life elaborating on the complex web of life in the tide pools in Mukkaw Bay. Within months of coining the keystone hypothesis, he wrote a second paper on the interaction between Pisaster and the black turban snail, Tegula funebralis. Paine suggested that the snails’ size and distribution were controlled by their “major predator,” even though snails weren’t Pisaster’s favorite (or even second-favorite) food. Scientists and journalists alike have since referred to Pisaster as the dominant carnivore shaping the size, distribution, and abundance of Tegula in a tide pool. 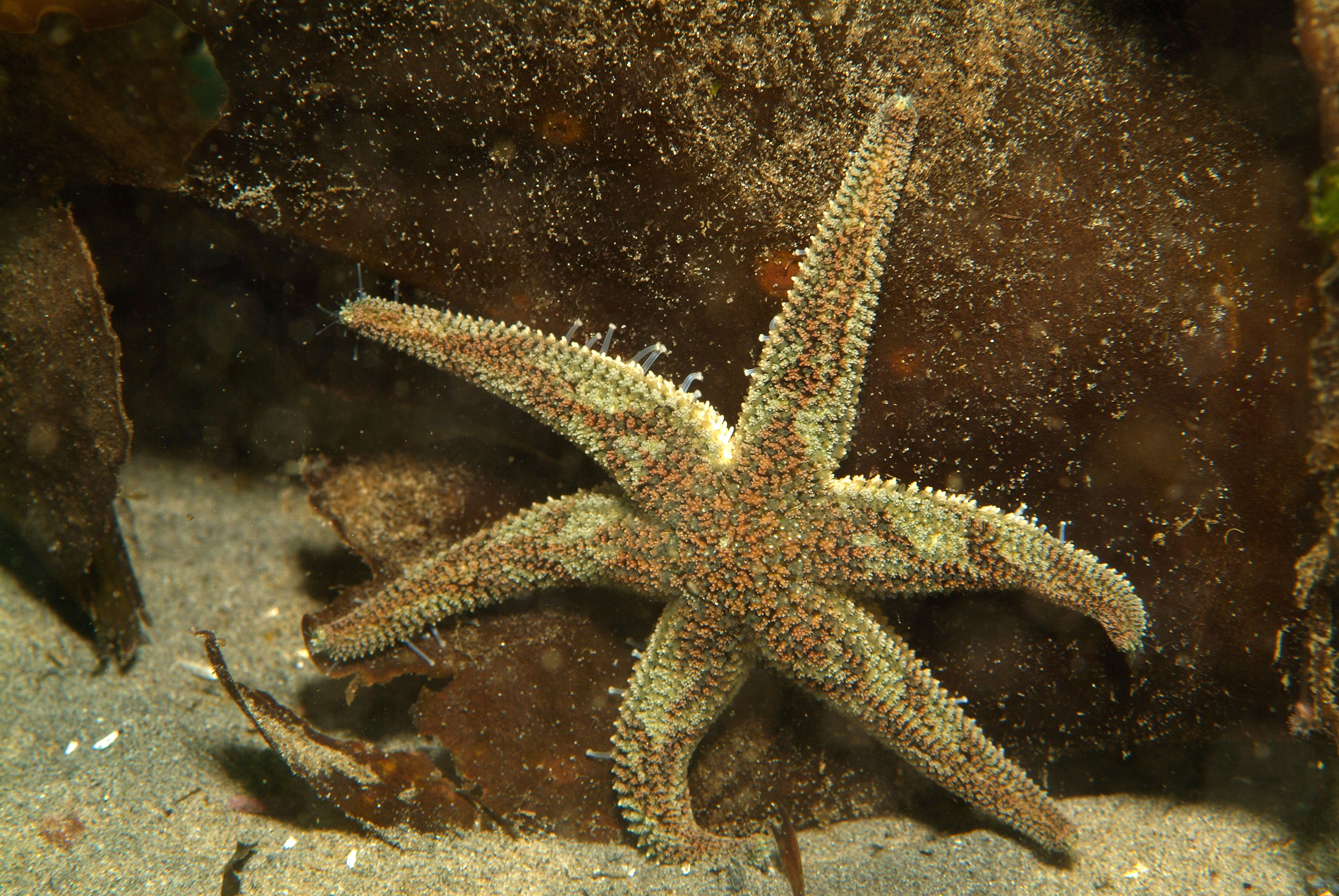 Sarah Gravem says that the ecological role of Leptasterias sea stars has been overlooked in favor of the larger and more obvious Pisaster, but ongoing research is revealing Leptasterias’ true significance. Photo by Amar and Isabelle Guillen/Guillen Photo LLC/Alamy Stock Photo

To Gravem, it seemed that Paine and others might have overlooked the less-charismatic sea star hiding in the back of the tide pool. She was sure Pisaster was not controlling the sea snail population in the same way it controlled the mussels, but she didn’t necessarily have a replacement predator in mind, either. That is, until 2010, when an algal bloom caused Leptasterias to disappear from the tide pools she studied, and the Tegula population doubled. The next year, wasting disease struck Pisaster, and the snail population in her study area was scarcely affected.

“When we go out and see this giant Pisaster, it seems like it must be super important,” Gravem says. “But if you were a snail and you had one giant Pisaster around and hundreds of tiny Leptasterias, you’d be worried about the hundreds.”

Paine’s keystone species hypothesis has yielded considerable insight into how ecosystems work. But several decades of follow-up work in other tide pools has shown that even the iconic Pisaster-mussel relationship is only relevant some of the time. Gravem’s discovery that Leptasterias sea stars control Tegula sea snails—not Pisaster—is a cautionary tale about assuming that a species that controls one important prey controls everything else. Even more, it reinforces the idea that, in ecology, context matters.

If Pisaster is the king of the intertidal, then Gravem is part of a community of ecologists who are writing its Magna Carta: the conditions under which the keystone predator rules.

Over the past four decades, for example, Gravem’s postdoctoral advisor, Oregon State ecologist Bruce Menge, has found that while Pisaster tends to rule freely on exposed coastal sites like the one Paine studied in Washington, the sea star’s influence is less pronounced in more sheltered areas. The keystone species’ controlling effect is prey dependent—there have to be enough mussels—and Pisaster population dependent—there have to be enough sea stars. It is size dependent, and probably temperature dependent as well. Menge has looked at sites up and down the Oregon coast, which allows him to study the effects that changing ocean conditions have on keystone relationships.

“Paine basically spent his entire career studying one location,” Menge says. “The insights resulting from that were awesome, and the depth of understanding is awesome. But it’s one site.”

As the evidence builds, researchers like Gravem and Menge are devising a refined keystone hypothesis, one that’s less rigidly hierarchical than the original. They see a habitat like the rocky tide pools of North America not as a stone archway held together by one critical species, but as a mosaic of interlocking dependencies.

“We make these nice definitions that help us explain the natural world, and the thing about ecology is that it’s never black and white,” Gravem says. “Keystone is useful because it’s true a lot of the time. And it makes us think about the grander idea that we can have one species that’s really having big domino effects on everything else. That’s what Paine’s real legacy is. Not that Pisaster are important. It’s that predators can shape the world around them.”