Silkies are open-ocean sharks that inhabit tropical and subtropical waters all around the world. Photo by Christine DeSilva/SharkTagging.com

The conditions are perfect for a cruise, it’s dead calm, like driving over glass, but beneath the surface the scene is roiling. Amberjacks are spawning, and sharks have descended on the area to feed on the yellow-striped fish. Bulls, tigers, and silkies have joined the feeding frenzy, competing with the fishermen above for the biggest amberjack prize.

Thirty kilometers off the Florida coast, Neil Hammerschlag and his team are trying to catch some of the sharks that have come to feed. Yet despite being out on the water since the early morning, so far their hooks have pulled up nothing. Watching the fishing boats off in the distance, the team realizes why: their coordinates are off. In the featureless sea, geography takes place under the waves. The mountain rising hundreds of meters from the sea floor—peaking 100 meters below the surface—is where the sharks are gorging. The researchers make their way toward the fishing boats.

Hammerschlag and his lab at the University of Miami take only a few shark-tagging trips this far out to sea each year, always during the late spring when the amberjack spawn draws open-ocean sharks together in one place. Cruising in a 7.6-meter fishing boat, the team is at the mercy of the weather. Today looks good, but the sea has got the better of them before.

Their first trip out here this year the team caught nothing, and hit bad weather on the way back. The forceful winds of a squall sent stinging pellets of rain at their faces, making it hard to see. But back on the water again, and with their position now righted, the sharks have finally started biting. And not just any sharks. On this trip, Hammerschlag and his team will snag a huge prize: an elusive silky shark.

“Is Dr. Neil Hammerschlag on that boat?” calls a well-known commercial shark fisher as the lab team pulls closer to the fishing boats sharing in the frenzy. The man holds up a half of a huge amberjack, the other half a gaping hole from a bite out of its middle. Clearly, sharks are feasting. He tosses the shark-ravaged scraps, the ones he can’t sell, onto Hammerschlag’s deck. After stringing ten fish heads and bloody tails along the custom fishing lines behind their boat, the lab team waits. An hour passes. 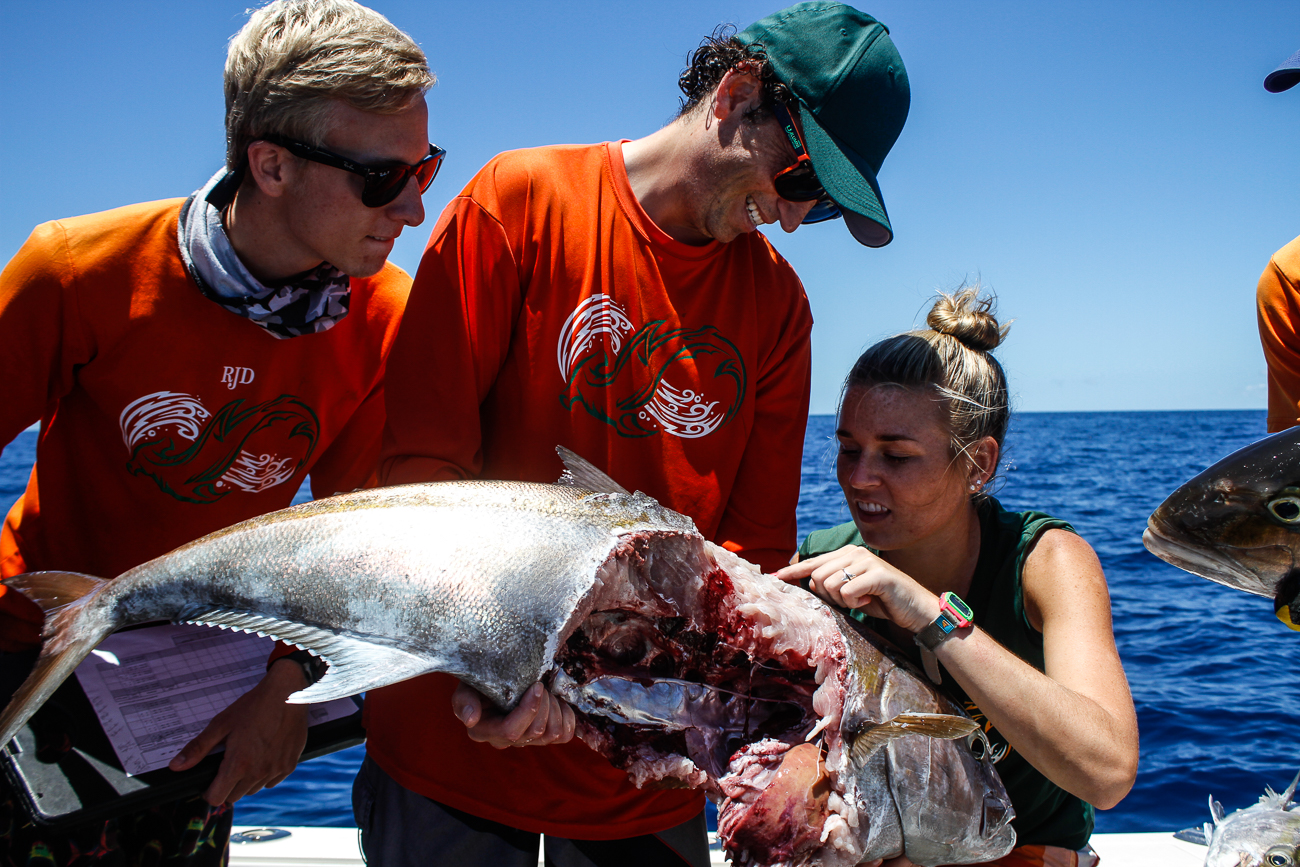 Hammerschlag holds an amberjack that was partially eaten by a tiger shark. Photo by Christine DeSilva/SharkTagging.com

The first shark they pull in is a powerful bull, a coastal shark that has wandered out to the open ocean. But it’s the third shark of the day that’s the real catch.

“At first glimpse from the deep, you’re just fighting [the shark] and seeing shadows,” says Hammerschlag. While some sharks are easy to recognize, like the hammerhead with its distinctive pronged eyes, other species are harder to pick apart. As the shark draws closer “you start eliminating what it isn’t,” he says. It’s not a tiger, or an oceanic white tip, nurse, or blue shark. By the time it’s hauled alongside the boat, he’s figured it out: it’s a sleek silky, with skin that shines like oil on water.

Silkies have been captured and tagged with satellite trackers in the Pacific, but so far as the researchers know, this is the first silky to be caught and satellite-tagged in the Atlantic—and with a new experimental high-resolution GPS tag boot. [Update: A silky shark was previously tagged by researchers working off Cuba in February 2015. That event was unveiled in the documentary Tiburones: Sharks of Cuba, which aired July 7, 2015.

“It is great that my colleague [Rob] Hueter has recently satellite tagged some silky sharks in Cuba. Together these data will fill in some important data gaps on this enigmatic species. It will be really interesting to know if silky sharks tagged in Florida are moving to Cuba and vice versa given that this species has virtually no protection in Cuban waters,” says Hammerschlag.]

Despite its gorgeous gloss, silkies are generic-looking sharks, and are not easy for untrained eyes to identify. This indistinct appearance is one reason why it is particularly hard to track how quickly the near-threatened species is disappearing to overfishing. “If we’re unable to properly identify these animals, we don’t know how many are being removed,” says Hammerschlag. 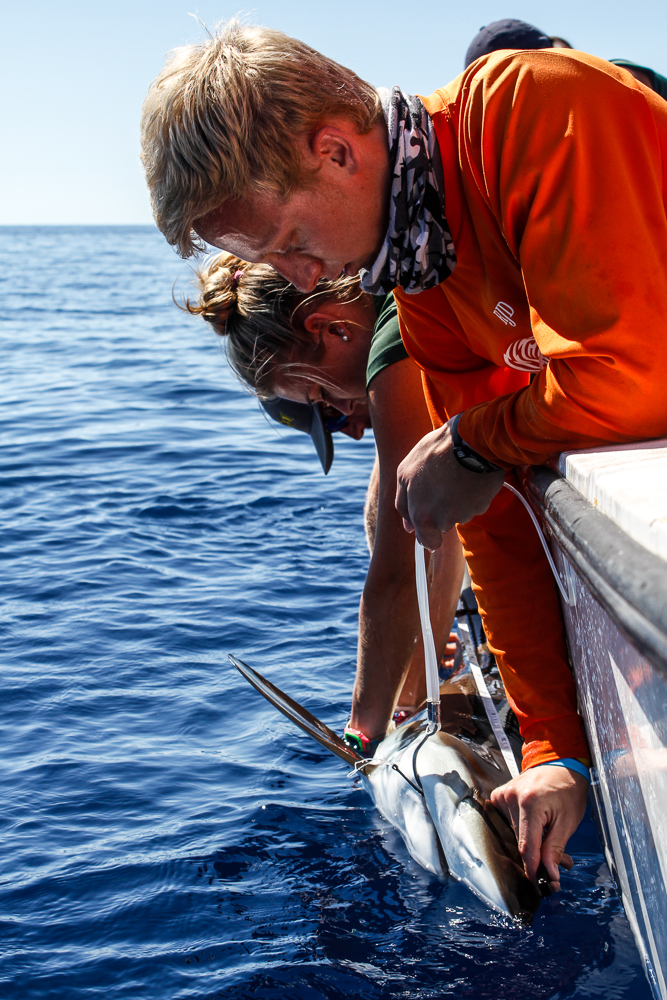 “They almost seem like a perfectly designed shark,” says Emily Rose Nelson, a master’s student with the lab. “The coloration goes from grayish-silver to black, and almost looks painted on. The incredibly smooth skin shimmers.” Putting a GPS satellite tag on a silky for the first time felt amazing, says Nelson, and she couldn’t wait to go online and see where it next surfaced. Anyone can follow the tagged sharks on Google Earth.

The GPS tag will help fill information gaps that may lead to better protection. Remote tracking can identify areas of the ocean that are particularly important to the sharks, such as those where the animals gather or that are used for mating, feeding, or as birthing grounds.

“Then there’s a whole cascade of other questions you can ask and answer using this information,” says Melanie Hutchinson, a shark scientist in Hawaii. Changing fishing practices or technologies based on the observations, for instance, could reduce the impact fishing has on shark populations.

“These sharks are an apex predator in the pelagic ecosystem, and the health of their populations is strongly linked with the health of the ecosystem as a whole,” says John Hyde, a geneticist with the US National Oceanic and Atmospheric Administration. A single individual “will not answer all the questions we have on silky shark movement patterns,” he says, “but it’s a start.”

Other than the big bull shark, the silky, and a second silky that was too tiny to tag, the team did not catch any other sharks this trip. “We’re all exhausted and sunburnt, but we didn’t strike out,” says Hammerschlag. “The best part is still to come—the data. Now we get to follow this shark for a long time.”